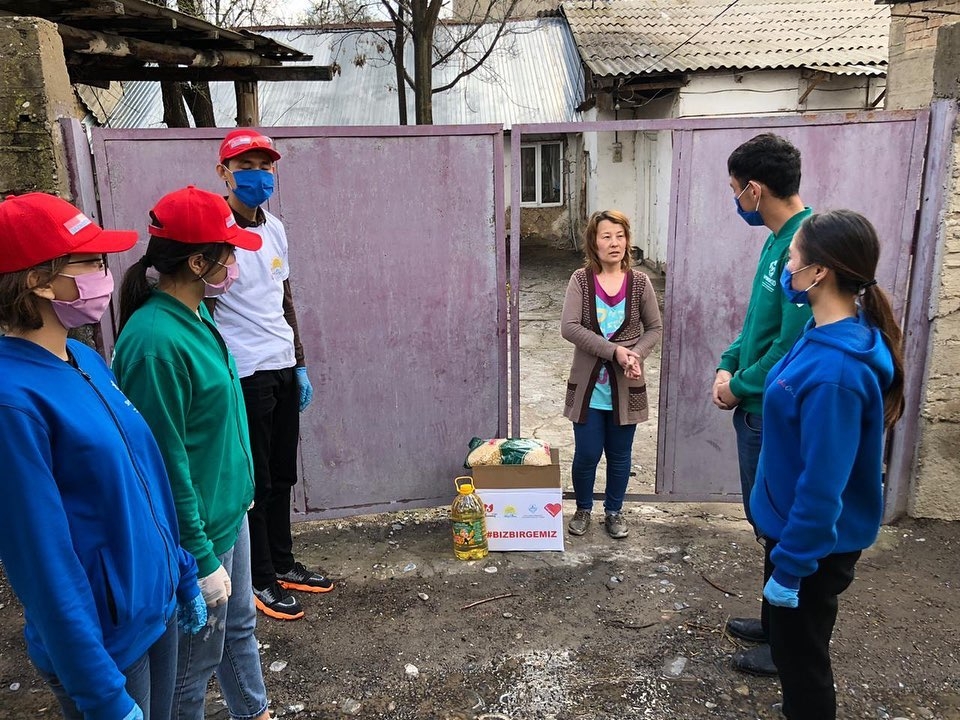 Birgemiz, a charitable foundation set up in March by the former president of Kazakhstan, Nursultan Nazarbayev, was meant to be a feel-good exercise in solidarity.

If the name, Kazakh for “we are together,” did not make the point clearly enough, there is a quote on the foundation’s website home page to underline the message.

“Kazakhstanis have always helped one another through difficult times,” reads a quote next to a picture of Nazarbayev. “The moment has come to demonstrate our cohesion.”

Because Birgemiz appeared right at the outbreak of the coronavirus crisis, assistance to communities and citizens affected by the pandemic was cast as a dominant theme of those efforts.

A cursory glance at the charity’s leadership quickly reveals a less sentimental purpose, however. The chairman is Bauyrzhan Baybek, the deputy head of the ruling Nur Otan party. Nazarbayev founded and leads Nur Otan. Many others have similar formal or informal links to the party, a fact that lends the foundation a whiff of early electioneering.

Elections for the lower house of parliament, the Majlis, are scheduled to take place no later than January 2021. There is little prospect of Nur Otan losing its suffocating, state-aided dominance in the legislature – it currently holds 84 out of the 98 available seats. Still, Birgemiz appears to have been designed in part to mollify an electorate increasingly disposed to rancorousness.

At least, that was the plan.

Birgemiz looks lately like just another casualty of the all-consuming coronavirus outbreak.

In an appeal to the nation in March, Nazarbayev, who retains powerful but loosely defined institutional sway through his bespoke Elbasy father of the nation role, called upon businesses and the wealthy to cough up money for the charity. To get the ball rolling, his own Foundation of the First President gave 200 million tenge ($450,000).

In the end, the vast bulk of the money came from just a handful of sources.

Beyond a short list of rich businesspeople, there are few dozen regular citizens included among the sponsors. Their contributions are relatively trifling, though. One, listed as Bekzat Saghat, gave 37 tenge ($0.10).

By the beginning of July, all the money had gone. Most was spent on providing in-kind assistance to around half a million families. Essentially, handouts – not from Nur Otan itself directly, but from elements unmistakably linked to it. More than 2,000 health workers on the frontline in the battle against coronavirus received bonus allowances. Five million medical masks were purchased for the poor.

The flurry of activity has now fizzled out.

If in April, the Birgemiz website was providing almost-daily bulletins on the charity’s activities, the news has since trickled to almost nothing. There was only one update for the whole of June.

Birgemiz was the target of sniffy criticism from the outset. A political activist called Alnur Ilyashev wrote a scabrous Facebook post in March under the title of “A mountain gave birth to a mouse” in which he disparaged the relatively modest amounts raised. The implication was that sponsors could easily have dug deeper.

Kulibayeva is a case in point. Last year, she sparked a brief flurry of indignation after reportedly splurging over $60 million on a chateau in Switzerland. That revelation was disastrously timed as it emerged around the same time Nazarbayev spoke publicly to criticize what he described as the lack of gratitude of low-income families receiving benefits.

“It’s give, give and then give some more,” he complained of the smattering of protests occurring at the time, adding for good measure that hard-up women attending pickets should instead “buy a pair of cows and look after [themselves].”

Ilyashev’s sustained broadsides against Birgemiz, Nur Otan and the government’s handling of the coronavirus emergency did not go unpunished. In April, he was detained on the grounds that his kvetching constituted a material and criminal menace to public order. And then, on June 22, an Almaty court sentenced him to three years of limited freedom and 300 hours of community service.

Former diplomat and political commentator Kazbek Beisebayev used the term “voluntary coercion” to describe the way in which businesses and tycoons are advised to donate to charitable foundations. When Nazarbayev suggests that private interests contribute, they are not being given a choice, Beisebayev told Eurasianet.

This unwritten contract between business and state has long been the norm.

At a conference of the Assembly of People of Kazakhstan in April 2017, Nazarbayev outlined that concord in explicit terms.

“Let [businessmen] get rich ... The government has created conditions for you to earn your money, now share this money with the people,” he said.

The notion that a Sword of Damocles was hanging over the private sector was made yet more plain almost two decades ago, in 2001, when Nazarbayev in one public event warned his listeners, business community representatives, that he could “grab any one of you by the hand and drag you off to court.”

This relationship has its roots in the history of the privatization drive of the 1990s, when a few dozen companies came to acquire the bulk of valuable assets up for grabs. Grumbling about this from the long-ago tamed parliament was firmly silenced by Nazarbayev, who was eager to rush through the formation of a new, post-Soviet business and political elite.

Given how dominant Nur Otan is on the political scene, it should not really need goodwill stunts like Birgemiz. But there is evidence that attitudes are evolving.

First of all, there is the fallout of the COVID-19 outbreak and the related restrictions to consider.

“[Nur Otan] are in real need of public relations right now, because the lockdown and the resulting level of unemployment have led to protest sentiment intensifying,” political analyst Talgat Ismagambetov told Eurasianet.

In March 2019, Almaty-based sociopolitical research group Strategia published a survey in which only 20 percent of respondents who said they would be voting at the next parliamentary election said they were already committed to casting their ballot for Nur Otan. Another 39 percent said they were still unsure what party they would favor.

Such figures offer inevitably limited insight into the actual outcome of elections. Polling is an underdeveloped and heavily regulated science in Kazakhstan. Strategia queried a paltry 1,631 people, so its findings are hardly conclusive. And, in any case, when polling season arrives, the state deploys an array of armory to prop up turnout figures and assist the ruling party’s fortunes.

And yet, the figures are not without meaning. Political analyst Daniyar Ashimbayev contends that it is because of the change in the public mood that Nazarbayev’s successor, President Kassym-Jomart Tokayev, has “to a certain extent distanced himself from Nur Otan.”

But that would be an oversimplification since Nur Otan’s performance will nonetheless be read in part as a referendum on Tokayev’s performance in office.

“Nur Otan’s … performance at the elections will be the population’s assessment of the current president,” Ashimbayev wrote in a commentary on his Facebook account in June.

The question is still hanging about whether Nur Otan allies will just ditch the Birgemiz venture as an abortive PR operation. Or if they will, in light of the ever-worsening coronavirus emergency, redouble their efforts, which is the scenario that Ismagambetov favors.

“I think the authorities will have to appeal again for help from businessmen,” he told Eurasianet. “[Nur Otan] needs to be shown as being alive and doing something.”