Kazakhstan, Russia celebrate 20 years of friendship despite the cracks

There's been talk of eternal friendship, even as Russian media takes potshots at Astana. 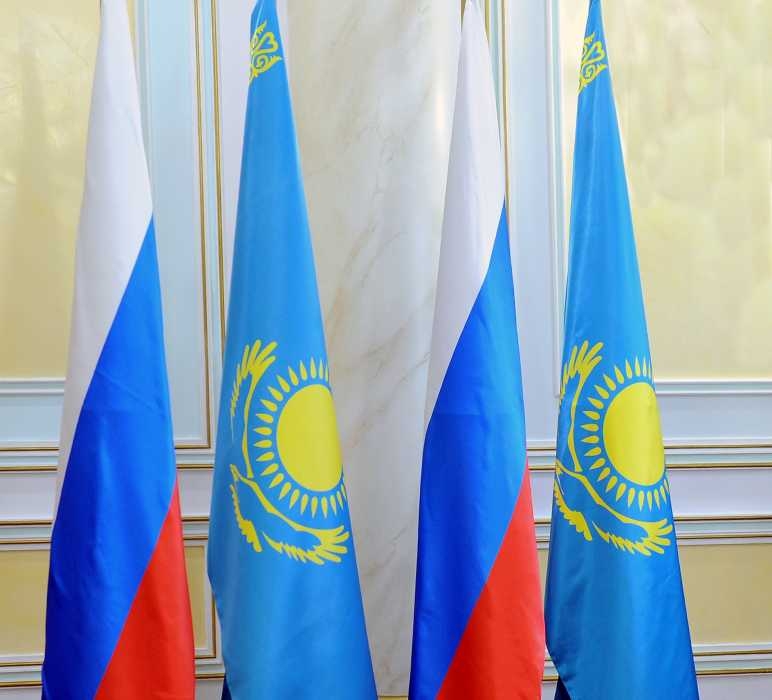 An image showing flags of Russia and Kazakhstan side by side. (Photo: Kazakhstan Foreign Ministry website)

At the official level at least, Kazakhstan and Russia have been exchanging pleasantries this week as they marked the 20th anniversary of a formal declaration of friendship and partnership.

But a slight unease and tension is not hard to divine below the surface.

In an official statement, Kazakhstan’s Foreign Ministry spoke about “bonds of eternal friendship" and of readiness to deepen the close relations enjoyed by the neighboring nations. From time to time, however, Moscow appears to relish sniping at its would-be fastest ally.

At the start of July, for example, well-known Russian state television presenter Vladimir Solovyov caused a stink by declaring on his show that Kazakhstan was hosting U.S. army bases at two Caspian ports, Aktau and Kuryk.

This was a flagrant and knowing falsehood, as Kazakhstan’s authorities were swift to point out. In a statement, the Foreign Ministry in Astana clarified that Kazakhstan is simply allowing the United States to use its ports as transit points for shipping strictly nonmilitary material to Afghanistan. Since more people watch Solovyov’s show than read Kazakhstan Foreign Ministry press releases, however, the damage was done.

And this is not the first time Solovyov, one of the Russian state’s most loyal and cynical propaganda attack dogs, has leveled such unfriendly and baseless accusations at Kazakhstan. In April, he grumbled out loud about Kazakhstan’s decision to abstain on a Moscow-proposed UN Security Council resolution to condemn airstrikes against Syria by the U.S., Britain and France. The resolution was never going to pass since all the countries directly involved in the airstrike were permanent Security Council members and had a veto privilege. But the failure to get even symbolic broad support was embarrassing for Russia, hence the irritation at Kazakhstan in nationalist circles.

Venting his frustration, Solovyov wondered whether Kazakhstan might be stringing Russia along while courting the West.

“Should we expect the next Maidan in Kazakhstan?” Solovyov said in something of a non sequitur, referring to the political unrest that toppled the government in Ukraine in 2014.

Even earlier, there was the matter of Kazakhstan’s declared plans to switch over from the Cyrillic to Latin script, a move that has upset some thin-skinned champions of Russia’s alphabet.

Russian Foreign Minister Sergei Lavrov grumbled in March that this change of policy should have been agreed with Kazakhstan’s partners in the Eurasian Economic Union trade bloc. The insistence was perplexing since it is not as though there are free and unfettered European Union-style borders between EAEU members, so U.S. citizens would not be able to slip into Russia by traveling into Kazakhstan.

Kazakhstan’s Foreign Ministry was suitably spiky, noting that “the introduction and revocation of the visa regime for citizens of foreign nations is the privilege of any sovereign state.”

Yet another irritant to add to the pile was the opening in 2016 of a U.S.-funded structure in Almaty called the Central Reference Laboratory, which is designed to research contagious animal and human diseases. In different times, the appearance of such a facility might not have raised eyebrows. But now it seems Russia is insistent it be given access to the lab, which it fears may be used to develop biological weapons that could one day be turned against it.

Although the talk of friendship is without doubt sincere, Kazakhstan appears to be taking precautions. In September, Astana adopted its fifth military doctrine in the nation’s history, and there were some curious adjustments. References by military planners to “hybrid methods” and the threat of “incitement and escalation of armed conflict on the Republic of Kazakhstan’s border space” have been read as clear allusions to the conflict that Russia stoked in Ukraine.

In a variation on the old dictum, Kazakhstan is keeping its friends close, and its very good friends even closer.