Putin hijacked a summit in Kazakhstan to spread a conspiracy theory, undermining his host’s efforts to get the world to take a grouping of Asian leaders seriously. 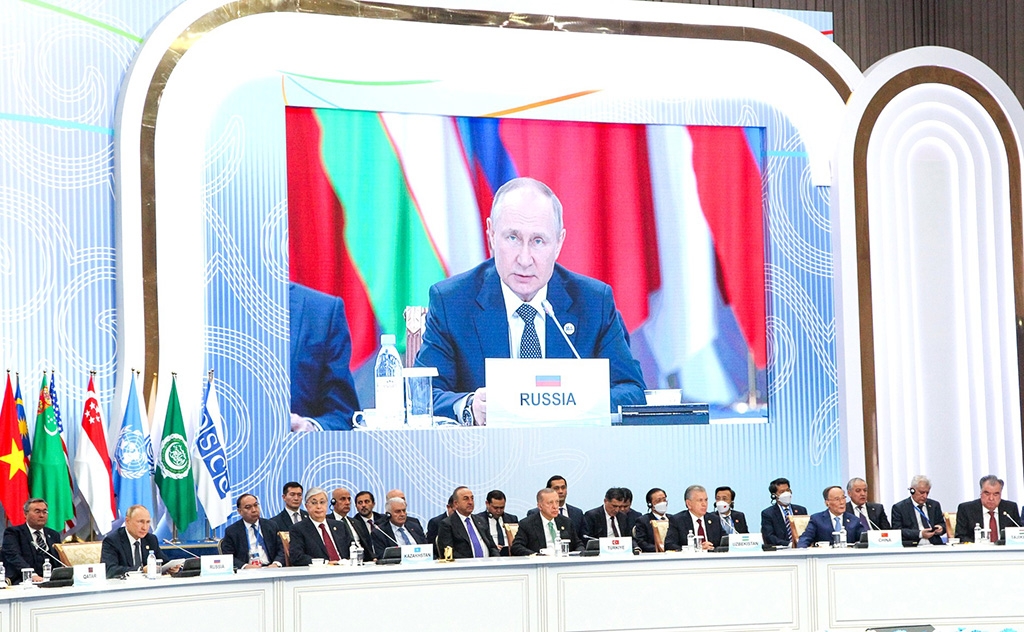 Welcoming heads of state to Kazakhstan for a summit on October 13, President Kassym-Jomart Tokayev was hoping to focus on Astana’s aspiration to transform a talking shop into a body that will punch its weight on the global stage.

The 27 members of the Conference on Interaction and Confidence Building in Asia, including heavy-hitters like China, India and Russia, supported Astana’s ambition to turn CICA from a dialog platform into a bona fide international organization with a serious mandate.

Russian President Vladmir Putin also supported Astana’s plan to beef up CICA, whose creation in the 1990s was Kazakhstan’s brainchild.

But that did not stop him from undermining efforts to get the world to take CICA seriously by spouting a wild conspiracy theory from the tribune when he took the floor.

It was time to review the workings of the global financial system, which have “permitted a self-proclaimed so-called Golden Billion, which has locked in for itself all flows of capital and technologies, to live to a significant degree at the expense of others,” he told delegates.

The three-decade old, Russian-invented conspiracy of a “Golden Billion” scheming to rob the world and destroy Russia is one the Kremlin has deployed ever more frequently since invading Ukraine.

The theory argues “that Russia’s isolation after its invasion of Ukraine was not because of its actions – but because of an inevitable global conspiracy against it,” the Washington Post explained after a previous rant from Putin.

Following this week’s carpet-bombing of Ukraine, Putin used the CICA platform to wax lyrical about how Russia was “together with other Asian states doing everything to form a system of equal and indivisible security, based on the UN Charter’s universally accepted principles of international law.”

A meeting between Putin and Turkish President Recep Tayyip Erdogan on the sidelines of the CICA summit was expected to focus on Ankara’s offer of mediation over Ukraine. But Erdogan’s office made no mention of that when it reported that the two had discussed transportation, nuclear power and grain supplies. The Kremlin merely stated tersely that the meeting had happened.

While most leaders addressing delegates, including Tokayev, avoided mentioning Ukraine in favor of nebulous talk about global turmoil, Erdogan was more direct.

“Each of us is feeling the regional and global impact of the crisis in Ukraine,” he said.

Turkey’s goal was “to stop the bloodshed as soon as possible,” because there would “be no winners in war and no losers in a just peace.”

Erdogan also used his visit to Astana to make a pointed statement of support for Kazakhstan, which has distanced itself from Russia’s war while refraining from direct criticism of its partner’s aggression in Ukraine.

“We will continue to support the stability, peace, sovereignty and territorial integrity of brotherly Kazakhstan,” Erdogan said after meeting with Tokayev.

That followed Chinese President Xi Jinping’s statement last month that that Beijing would “resolutely support Kazakhstan in the defense of its independence, sovereignty and territorial integrity” and oppose “interference by any forces” in its internal affairs.

Given that the most obvious potential threats to Kazakhstan’s territorial integrity emanate from its northern neighbor Russia, such remarks from Xi and Erdogan look like warnings to Putin as he continues to wage war in another neighboring state.