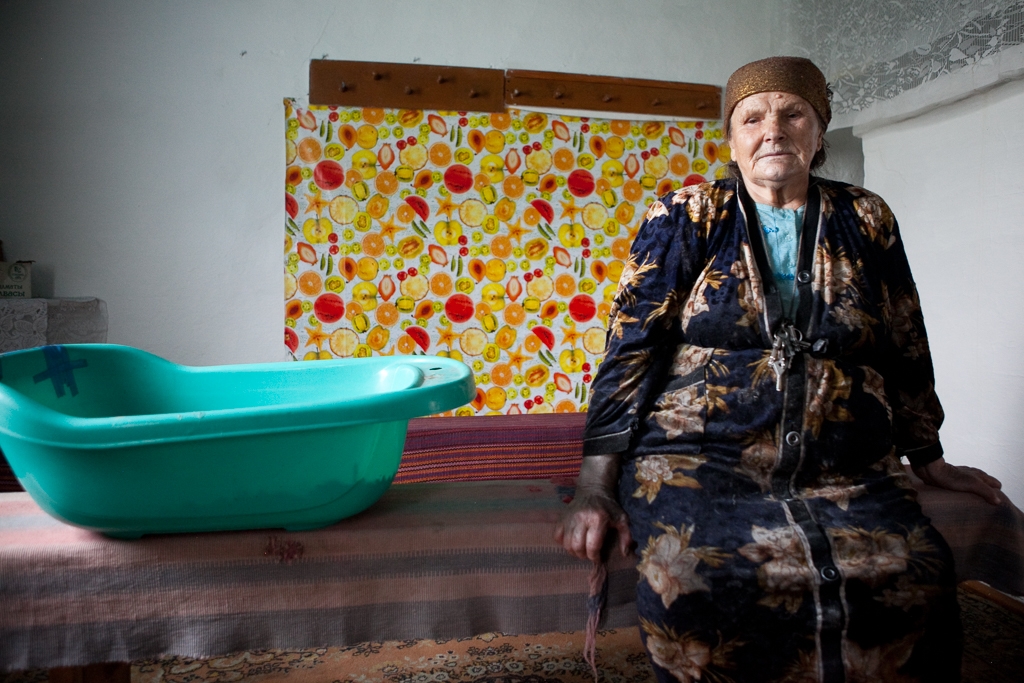 Valentina Murzintseva sits inside the church she built for her community's dwindling congregation of Old Believers. (Photo: David Trilling)

Valentina Murzintseva shuffled to the door of the small white church, unbolted the padlock and stepped inside. “True faith existed in the past,” she said, gesturing around the icon-filled interior with a flourish, “and it still does!” Murzintseva, 75, knows something about the power of faith – she built the Peter and Paul Church herself a decade ago in Korobikha, a village in eastern Kazakhstan’s Altay Mountains. The project was an affirmation of her religious beliefs after recovering from an illness.

Murzintseva belongs to the Russian Orthodox Old Believer Church, which emerged from a schism in the Russian Orthodox Church in the mid-17th century. She is the descendant of Don Cossacks sent scattering to the outer reaches of the Russian state by the divisive split over religious rituals. “We are Old Believers,” Murzintseva told EurasiaNet.org as she perched on a bench beside a plastic green bowl used for baptisms. “When Patriarch Nikon was there, he started to involve everyone in his innovations. …Everyone started fleeing in different directions.”

The liturgical reforms initiated by Patriarch Nikon that she is talking about were introduced in 1653 and sparked the schism (raskol in Russian) in 1666. The changes sought to bring Russian Orthodox Church practices into line with Greek Orthodoxy and encompassed issues such as whether to make the sign of the cross with two fingers or three, whether to hold church processions clockwise or counter-clockwise, and how many letters the name Jesus should contain.

Centuries later, the reforms may seem obscure to outsiders – but opinions among believers remain steadfast. Many of those who cling to the old ways, known in Russian as Starovery (Old Believers) or Staroobryadtsy (Old Ritualists), still speak of the schism as if it is fresh in their minds.

“When Patriarch Nikon started introducing his innovations, these Old Believers ran away in order not to adopt them. [Some] fled to Kazakhstan, to keep to their faith,” Yevgeniya Kashkarova, Murzintseva’s daughter, told EurasiaNet.org. She traces a link between the upheavals that buffeted the church asunder 350 years ago and her family’s presence in the Altay. “[Old Believers] used to be killed and sent for hard labor – they were made to change their faith. That’s why they fled to the mountains. And now here we are living here!” The schism scattered Old Believers far and wide – nowadays there are communities in the United States, Canada, Australia and South America as well as the former Soviet Union.

Kashkarova was brought up in a strong Old Believer tradition, and she is raising her own three children with an awareness of their religious and cultural heritage.

“Of course I am, so the children know where they’ve come from, what their faith was, what to adhere to, what holidays to observe,” she said over a glass of mead produced by her own bees. “I tell mine, but I don’t know how it’ll work out in future.”

Indeed, the future of the Old Believers in Kazakhstan is uncertain. In 19 years since the Central Asian state gained independence, there has been an exodus of ethnic Russians from East Kazakhstan to Siberia, causing Old Believer communities to shrink. “The congregation has sharply reduced, because many leave for Russia,” Father Gleb Kazachenko of the Church of Protection of the Holy Mother of God in Oskemen, East Kazakhstan’s regional center, told EurasiaNet.org. The main reason, he says, are desires for good educational and job prospects. “The future for the younger generation,” Kazachenko said.

When Father Gleb became priest in Oskemen (also known as Ust-Kamenogorsk) two decades ago, the Old Believer congregation numbered around 150 and prayed in a house. His daughter Viveya, 18, showed how her father converted that house into a church topped with a pretty wooden cupola, its incense-scented interior lined with delicately painted icons. His congregation has now shrunk to 70. There are no reliable figures on numbers of Old Believers in Kazakhstan; Father Gleb estimates there are 1,500 in the east (where the vast majority live), mainly small congregations scattered around settlements they founded as they fled persecution by the mainstream church and state. Old Believer villages are strung along the churning Bukhtarma River in the shadows of wooded green mountains, along a rutted road lined with birches and poplars. The land is planted with rows of vegetables that sprout in abundance during the short summer, and houses hundreds of beehives producing the famed Altay honey.

The setting is idyllic – but life is hard. Korobikha, founded in 1792 by an Old Believer named Korobitsyn, has electricity but no running water. Villagers tend to grow their own food to get them through the harsh winter, and have some left to barter for clothes and other goods; they have little access to cash. Many young people see this is a life of hardship and aspire to the urban environment, in Oskemen or Russia.

A decade ago the Korobikha church was popular with worshippers; now the congregation has dwindled to a handful. “I’ve built it and if they’re not prepared to go to it, the sin will be on them, not on me,” Murzintseva shrugged. She is from a generation that struggled to keep faith alive amid intense pressure from Soviet authorities to suppress organized religion, which authorities viewed as an impediment to the construction of a Communist society.

Raisa Sagdiyeva, born in 1938, recalls her Old Believer grandfather hiding icons and telling of a priest who fled to China in the 1920s after incurring the wrath of the Communists for conducting a baptism. Such tales did not deter Sagdiyeva from having her own son, Boris, secretly baptized as an Old Believer in 1957.

After centuries of persecution by state and church, the collapse of the Soviet Union brought the Old Believers the chance to worship freely – but paradoxically, says Father Gleb, their thirst for religion diminished. “When the faithful were persecuted, as in Soviet times, people aspired more to spirituality – young people, everyone,” he said. “Now, when you have the chance to manifest your spirituality, people are turning away; different values have emerged among young people – material values … non-spiritual values.”

Father Gleb is still convinced that “the congregation will remain one way or another.” His daughter Viveya is one of the dwindling numbers of young people committed to keeping the faith alive, pledging to marry an Old Believer and bring her children up within the church.

But times are changing, and back in Korobikha there is another sign of how the Old Believers’ roots in Kazakhstan are slowly eroding. A few years ago the last old lady bearing the name of Korobitsyn, the village founder, passed away, taking a piece of Old Believer history to the grave with her.