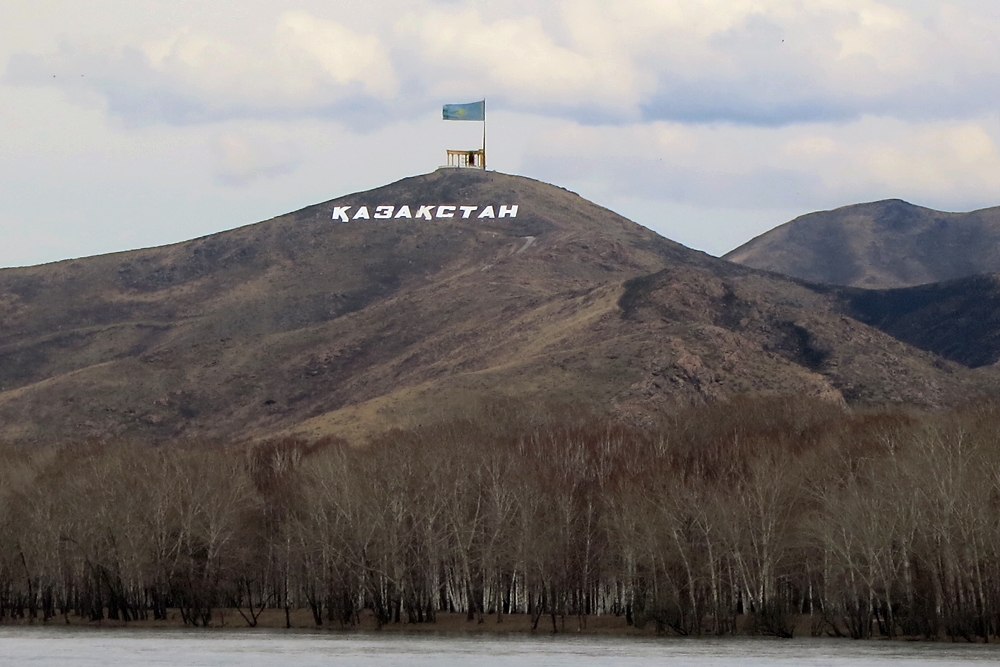 A reminder to the residents that this is Kazakhstan. (Photo: Joanna Lillis)

On a hillside in northeastern Kazakhstan, south of the Russian border, a simple and stark slogan looms over the city of Oskemen: “Kazakhstan,” reads the message in giant white letters arrayed across the green slope.

When the sign was erected in 2009, ostensibly to foster Kazakhstani patriotism, it seemed to be stating the obvious. But now that Russian President Vladimir Putin has set himself up as the defender of Russians everywhere, and used that rationale to annex Ukraine’s Crimean peninsula, the slogan seems more pertinent than ever – at least to Kazakhstani leaders in Astana.

Ever since the Soviet collapse in 1991, President Nursultan Nazarbayev’s administration has stressed the promotion of tolerance and inter-ethnic harmony. For the most part, Nazarbayev has succeeded in keeping the country tranquil, enabling the economy to attain an unrivaled level of growth in Central Asia. But now, the ripple-effect created by the Ukraine crisis threatens to test the loyalties of Kazakhstan’s ethnically diverse populace, in particular the substantial ethnic Russian minority, which is concentrated in northern regions of the country.

Given recent developments, boosting patriotism has rocketed up Nazarbayev’s political agenda. Highlighting the high level of concern in Astana, officials introduced amendments in early April to punish public calls for separatism with long jail terms.  Separatist sentiment in the industrial northeast created a headache for Nazarbayev in the 1990s – and Oskemen was once a hotbed of intrigue, with 13 pro-Russian conspirators jailed over a separatist plot in 2000. In this city, known in Russian as Ust-Kamenogorsk, 67 percent of inhabitants are Russian, triple the national ratio.

Separatist moods ebbed as Kazakhstan consolidated its nationhood – but the scenarios playing out in Ukraine are enough to cause Nazarbayev a full-blown migraine. Russia’s justification of its annexation of Crimea on the grounds of protecting Russian speakers makes Astana jittery. In Kazakhstan, 22 percent of the population is ethnic Russian, with far higher ratios living along the sprawling 7,000-kilometer border with Russia.

Inflammatory statements by Russian nationalists about claims on northern Kazakhstan have added fuel to the fire, sparking an unusual diplomatic spat between close allies Moscow and Astana. On April 11, following a sharp rebuke from Kazakhstan, Moscow disassociated itself from the pronouncements  – but did not explicitly deny having designs on Kazakhstan’s territory.

Astana may be up in arms, but Oskemen’s Russian-speaking community views the nationalist outbursts across the border with equanimity. “On the immutability of borders … talking about some actions being eternal is simply somewhat incorrect,” says Viktor Sharonov, a gruff Cossack ataman (leader), choosing his words carefully. “Then what call would the Scottish have to hold a referendum on separating from Great Britain?”

Sharonov was speaking on April 8 at a meeting of Oskemen-based Russian community groups attended by EurasiaNet.org, where community leaders championed the Kremlin’s actions in Ukraine and denounced what they perceive as Western meddling in Russia’s backyard. “I personally, and our Cossacks, see this as the desire of Western countries … to totally do the dirty on Russia once again,” Sharonov said heatedly.

On one hand, the prevailing view among Oskemen’s Russian-speaking community, as articulated by Navozov, echoes Astana’s official line: Nazarbayev has called the government in Kyiv “neo-fascists” and railed against Ukraine’s “discrimination against minority rights,” winning him plaudits from these community leaders.
“Nazarbayev supported Russia in those actions aimed at protecting the rights of ethnic minorities in Ukraine and protecting its national interests,” said Nikolay Plakhotin of LAD approvingly.

On the other hand, Russian intervention in Ukraine leaves many in Kazakhstan wondering: What if Moscow decides Russian speakers here need protection?

This scenario is overwhelmingly rejected in Oskemen, where Russian speakers interviewed by EurasiaNet.org said without exception that Nazarbayev’s inclusive ethnic and linguistic policies rule it out. “The situation in Kazakhstan is completely different to Ukraine,” Vadim Obukhov, deputy head of the Russian Cultural Center, said. “We don’t have any confrontation between Kazakhs and Russians.”

Nazarbayev’s pro-Kremlin stance in the Ukraine crisis is playing well in the Russian-speaking community in the north, although elsewhere critics vehemently attack it as a betrayal of national interests. “In the consciousness of many Russians the northern part of Kazakhstan is Russian territory,” Almaty-based analyst Aydos Sarym told EurasiaNet.org, hence “as many Kazakhs understand it, this [official pro-Moscow] position is mistaken.”

In Oskemen some ethnic Kazakhs do “fear” a Russian land grab, albeit at some hazy point in the future, Kenzhebay, a middle-aged Oskemen resident who declined to give his surname, told EurasiaNet.org. Many also believe that close partnership with Russia offers Kazakhstan its best protection: Astana can best safeguard its sovereignty by acting as a friend to Moscow rather than foe.

Russians questioned on Oskemen’s city streets viewed the idea of Moscow encroaching on Kazakhstan as preposterous. “I don’t think Russia’s going to grab a piece of Kazakhstan – what would it want to do that for?” puzzled engineer Viktor Chernyshev.

“Russia isn’t seen as some sort of enemy here,” explains Aleksandr Alekseyenko of the East Kazakhstan State Technical University. “It’s seen as an opportunity.”
From Oskemen, the Russian city of Novosibirsk is closer than Kazakhstan’s capital Astana, and locals flock over the border into Siberia to work and study – helped by Kazakhstan’s membership of the Russia-led Customs Union.

This free trade zone is to be transformed next month into the Eurasian Economic Union, amid vociferous opposition from Kazakh nationalists and liberals who fear Russian domination. But in northeastern Kazakhstan backing for the union is rock solid.

Vladimir Putin makes no secret of his nostalgia for the Soviet Union, or his vision of the union as a political vehicle promoting Russia-dominated post-Soviet integration; and some in Oskemen seem to share his dream.

The union represents “a return – perhaps not entirely, but nevertheless largely – to what existed in the Soviet Union,” suggested Navozov.

These words may be music to Putin’s ears, but perhaps not to Nazarbayev’s: he is suspicious of any political element to integration and has pledged not to cede “an iota” of Kazakhstan’s sovereignty.

Ukraine-style unrest is impossible here, said Leonid Kartashev, president of the Russian National Cultural Center, since “in Kazakhstan President Nazarbayev is legitimately elected, and in Kazakhstan there is a legitimate government.”