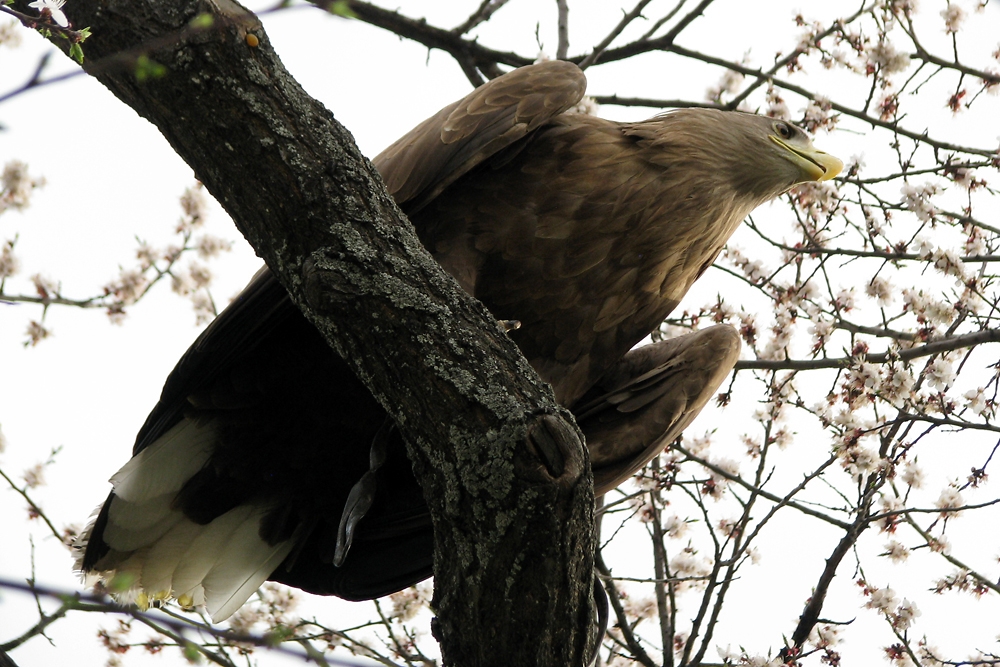 A sea eagle settles in a tree at the Sunkar Raptor Sanctuary in southeastern Kazakhstan. (Photo: Joanna Lillis)

In the foothills of the Tien Shan mountains in southeastern Kazakhstan, a falcon perches in a tree. Its eyes dart to and fro, all senses on alert. Suddenly it swoops, snapping up some prey and soars off.

This elegant bird being displayed by handler Paul Pfander is a saker falcon, a globally endangered species rarely spotted in the wild. This Falco cherrug was bred at the Sunkar falcon station outside Almaty, set up in 1989 to protect the saker in what was then the Soviet Union. Sunkar is now at the forefront of efforts to restore Central Asia’s population of the rare bird.

“Unless the population is increased, sooner or later the saker falcon will disappear – totally disappear from nature,” explains falcon station director Ashot Anzorov. “It’s not only Kazakhstan losing out here; it’s the whole world losing out.”

Sunkar, which means falcon in Kazakh, currently houses 435 sakers, bred here along with other birds of prey that the sanctuary is working to preserve. They include the golden eagle, a species not classified as globally endangered, but whose numbers in Kazakhstan are declining. Both the saker and the golden eagle are prized as hunting birds in Kazakhstan, though few people still practice the ancient art.

Springtime is the breeding season, so the falcon station’s numbers will soon swell: last year 170 sakers were born. Some are kept for breeding, some sold, and some (usually around a third) released into the wild to arrest population decline.

“We can adapt them 100 percent so they survive in the wild,” Anzorov told EurasiaNet.org in his office, outside which an ominous-looking black vulture and a supercilious golden eagle are tethered. “We’ve been releasing them for decades, so we know how to get this right.”

The raptors are handled “as chicks are reared in nature,” with human contact minimized in an adaptation process “based on the natural instincts of wild birds.”

The new-born chicks are housed in an incubator for five days until their eyes open, then transferred to a nest inside the falcon center to be tended by their parents until they learn to feed themselves. Then they are moved to a nest in the wild, where they gradually adapt to fending for themselves. “They have a biological clock in their heads, let’s say, and they understand when they should try to fly,” Anzorov explains. “When they’re confident of their powers … they leave the nest and don’t return.”

Over the years Sunkar has released over 500 saker falcons into the wild, helping to boost a population that has been dwindling for years in the territories it inhabits stretching from eastern Europe to western China through Central Asia. Sunkar’s efforts are complemented by a separate falcon-release program run by the Abu Dhabi Falcon Hospital, which last year released 66 sakers in Kazakhstan and plans to release 90-95 this spring.

The Falco cherrug is classified as endangered on the International Union for Conservation of Nature (IUCN) Red List and on Kazakhstan’s national Red List.
Population sizes are hard to assess due to difficulties with data collection, but the IUCN puts saker numbers worldwide at 6,400-15,400 breeding pairs, of which anywhere from 800 to 1,450 are in Kazakhstan. Anatoliy Levin of Kazakhstan’s Institute of Zoology estimated Kazakhstan’s saker population at around 1,000 breeding pairs in 2011; a 2009 estimate from the UK-based International Wildlife Consultants put it at double that.

The saker falcon population has been decimated due to “unsustainable capture for the falconry trade, as well as habitat degradation and the impacts of agrochemicals,” the IUCN says. The illegal trade took off in Kazakhstan in the 1990s, when trappers moved in to cash in on the global black market in endangered falcons, estimated to be worth $300 million annually.

Levin calculates that between 1994 and 1996 up to 1,000 sakers were illegally removed from Kazakhstan annually by trappers using all kinds of inventive tricks, from enmeshing falcons in fishing nets to scaling cliffs with professional climbing equipment to grab the elusive birds.

Trappers are regularly arrested with sakers in Kazakhstan, yet conservationists warn that foiled attempts are the tip of the iceberg of an illegal trade fuelled by law-enforcement system corruption. One ambitious Central Asian smuggling ring was thwarted in 2004, when 127 falcons were found at a Russian military airbase in Kyrgyzstan. They were destined for Syria, where they reportedly had a black market value of at least $1 million.

Smugglers usually get off with fines, so the potential profits outweigh the risks. Individual sakers can change hands for tens of thousands of dollars on the black market in the Middle East, where the falcons are prized for their hunting skills. The black market may be lucrative, but the legal trade is less so.

Sunkar – which is privately owned by entrepreneur and Almaty city councilor Viktor Bulekbayev – sells its falcons for a mere $1,000-$1,500 apiece, mostly to Middle Eastern buyers.

The sanctuary is a labor of love rather than a cash cow, but Anzorov says he would like to see Sunkar paid to release the falcons as a service to preserving biodiversity. A program launched in 2007 when the state paid it to release 60 sakers faltered with the onset of the global financial crisis.

This year, as well as sakers, Sunkar plans to release eight golden eagles, the first such attempt in Kazakhstan. When the birds of prey take wing and fly off, witnessing the “fruit of our labor” is a rewarding moment. “We’re very glad when our birds fly away,” said Anzorov. “We see that we’ve given them life. If it weren’t for us, they wouldn’t exist.”