Diplomats are trying to put distance between Nur-Sultan and Moscow, but Tokayev wants to show he is still loyal. 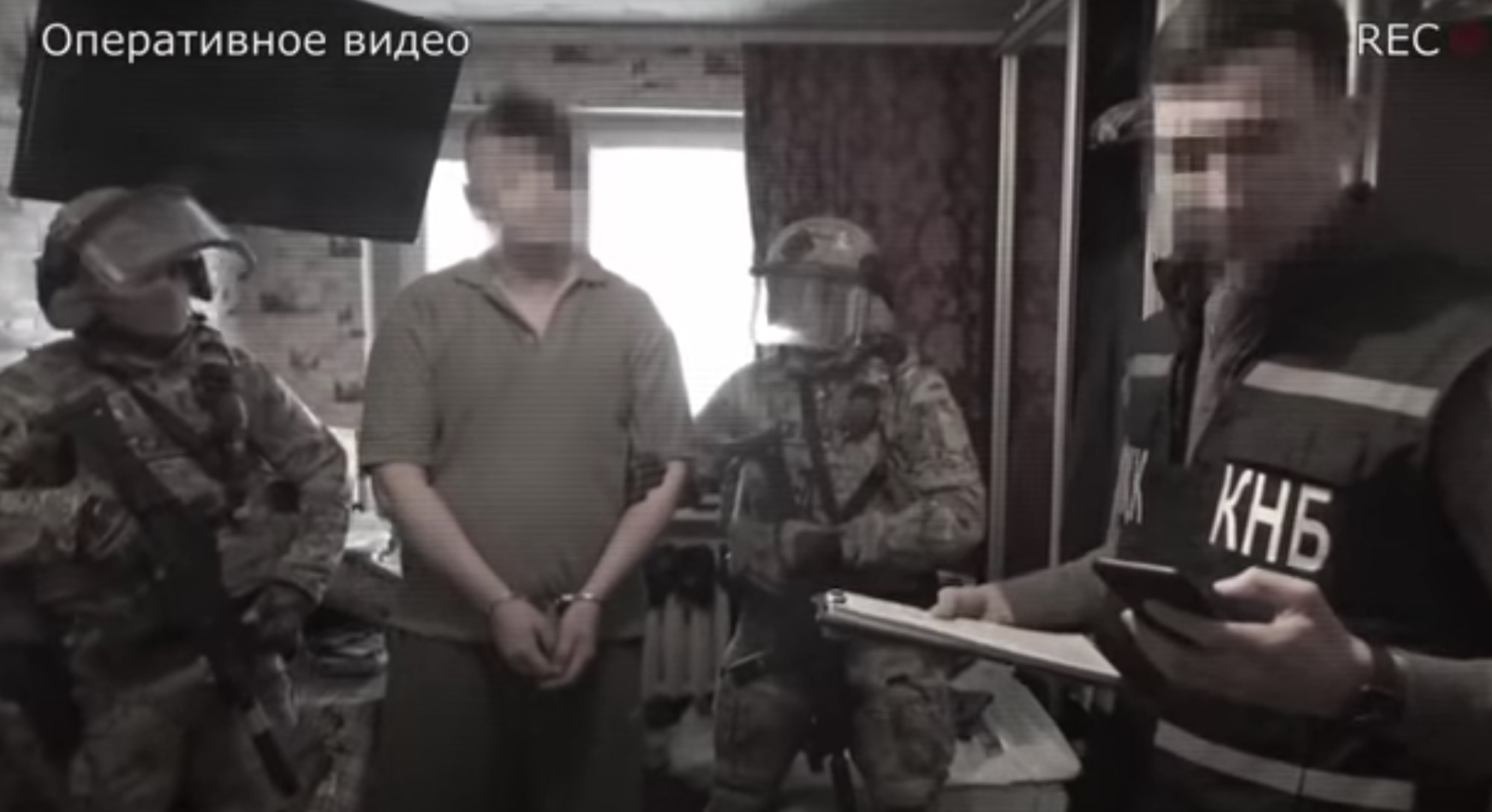 Screengrab of the moments after the arrest from a KNB-produced video.

Anybody spying the diplomatic weathervane in Kazakhstan at the moment is liable to be confused.

Nur-Sultan does not want to be seen in international eyes as being overly tied with Russia. But neither does it want Moscow to conclude that it is seizing this moment to creep away from their deep and involved economic and security relationship.

A strange development seemingly intended to underline the latter point occurred over the weekend.

On April 3, the security services claimed they had detained an operative tasked by an unspecified foreign intelligence agency with assassinating President Kassym-Jomart Tokayev.

The National Security Committee, or KNB, said in their colorful and yet sparsely detailed statement that the alleged suspect, who has been identified only as Citizen A, was furthermore planning to kill several other senior officials. Video footage of the purported arrest showed masked officers inspecting a mounted sniper rifle and large amounts of U.S. dollars in a small apartment.

In a final, curious and possibly telling detail that has drawn much mockery from skeptical online commentators, the man was said by the KNB to also be plotting to flood social networks with anti-Russian propaganda.

The timing of the revelation of this startling alleged scheme – and the claim that this unnamed figure was motivated by Russophobic sentiments – comes at a complicated time for Kazakhstan-Russia relations.

Earlier in the week, one senior Kazakh official caused a minor sensation by articulating his government’s boldest stance to date on Russia’s war in Ukraine. In a March 29 interview with the European Union-focused publication Euractiv, Tokayev’s first deputy chief of staff, Timur Suleimenov, restated Nur-Sultan’s support for Ukrainian territorial integrity and pledged full cooperation with international sanctions imposed on Russia.

“Of course, Russia wanted us to be more on their side,” Suleimenov told the interviewer. “[But Kazakhstan] will not risk being placed in the same basket as Russia.”

This has been widely read as Kazakhstan trying to put a wide berth between itself and its closest security ally, Russia. But the picture was muddied yet again on April 2, when Tokayev got on the phone with Russian President Vladimir Putin.

According to a readout produced by Tokayev’s office, the two men expressed “a common understanding on the exceptional importance of reaching agreements on a neutral, non-bloc, non-nuclear status of Ukraine.”

A commitment from Kyiv to remain neutral and refrain from seeking the reacquisition of nuclear arms are among the demands being made by the Kremlin in the ongoing talks to bring a close to the war in Ukraine.

Kazakhstan’s ambivalent role is informed by its eagerness not to fall victim to a dynamically evolving geopolitical landscape. Nur-Sultan’s concerns were laid out in specific terms by deputy Foreign Minister Roman Vassilenko in yet another interview with the European press – German daily Die Welt on this occasion – stating that Kazakhstan did not want to become a collateral victim of politically motivated economic warfare.

"If there is a new iron curtain, we do not want to be behind it," he told the German newspaper in an interview published on March 28.

In addition to performing a diplomatic tightrope walk, Kazakhstan’s authorities must also wrangle opposing local passions surrounding the war. There is no available statistical data on public sentiment in Central Asia on the war in Ukraine – indeed, one pollster has refrained from publishing its findings out of nervousness at causing an upset – so gauging the mood is complicated. The exchanges on social media have been vicious, however.

In the interests of avoiding more tension, the General Prosecutor’s Office on March 28 published a statement that was essentially a blanket warning for the general public to refrain from posting overly provocative messages on social media about the conflict. The arrest of a putative Russia-hating Tokayev assassin has in effect added a sting to this warning by implying that authors of posts critical of Moscow are the unwitting patsies of shadowy foreign spy agencies.

Even at street-level, authorities are searching for an elusive balance.

An anti-war gathering in Almaty on March 6 was attended by around 3,000 people who sang Ukrainian songs and hurled invective at Putin. These are big numbers by Kazakh standards, where permission for rallies is granted on an arbitrary basis, despite official claims to the contrary.

When organizers tried to mount a follow-up event two weeks later, though, the authorities demurred. The desired location had been booked, they said, by an all-day pro-Tokayev demonstration.