Though they are of military age, the activists believe they’re being singled out and punished for protesting an opaque power transfer. 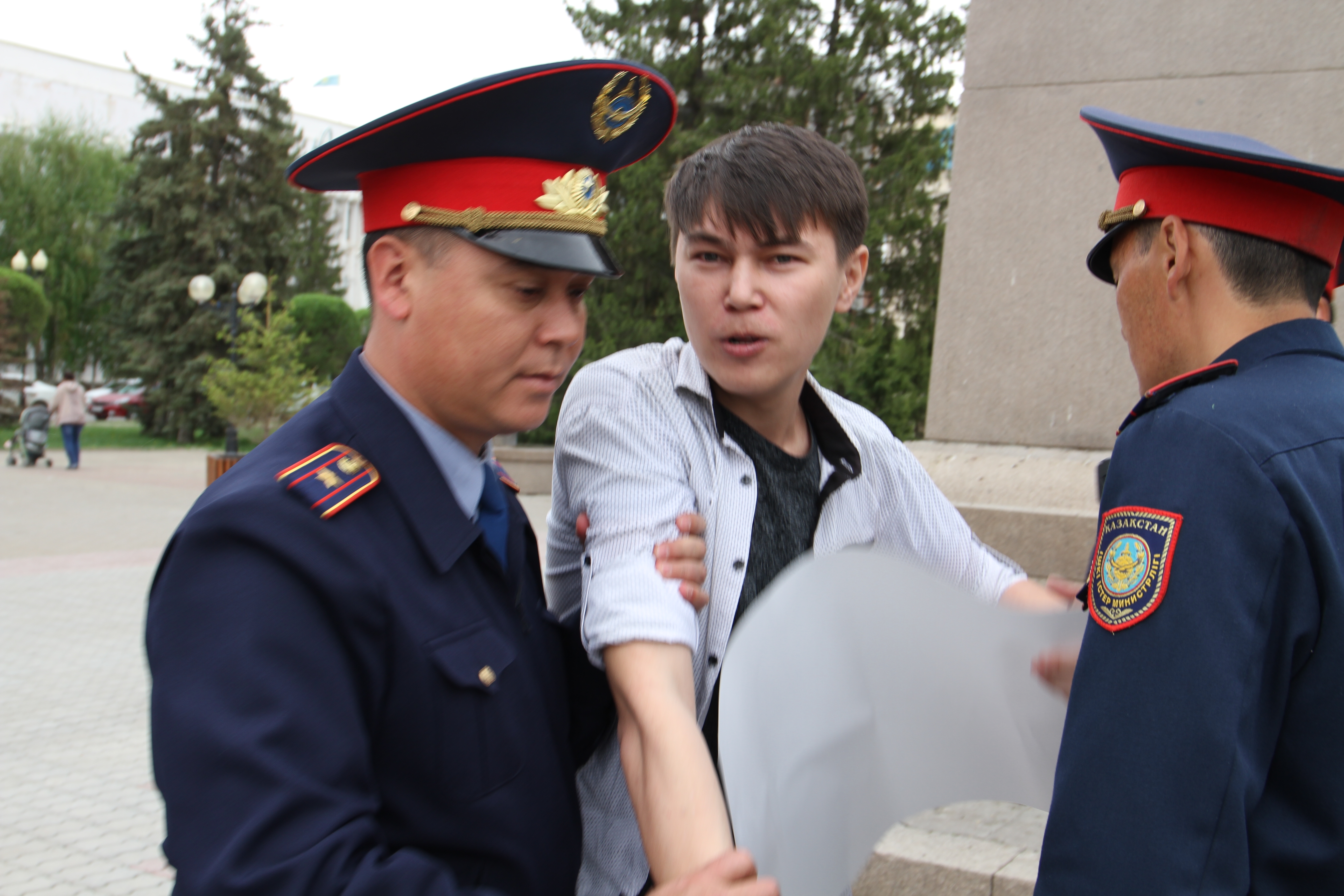 Kazakh authorities have conscripted two opposition-minded activists days after they held peaceful, but highly visible, protests. They say they’re being singled out and punished for expressing their opinions, and that their medical exemptions are being ignored.

Beibarys Tolymbekov entered the spotlight on April 21 when he and his girlfriend, Asya Tulesova, unfurled a banner bearing the words: “You cannot run from the truth” during a marathon in Almaty. Photos of the banner – which included the hashtags #forafairelection and #Ihaveachoice – instantly attracted online attention and helped stoke demonstrations in the subsequent weeks.

Protesters are angry that Kazakhstan’s first leadership transition is underway without any popular consultation. In March, Leader of the Nation Nursultan Nazarbayev suddenly resigned after almost 30 years in power, handing the presidency to Kassym-Jomart Tokayev. Tokayev, in turn, called snap elections for June 9 in which he is expected to win handily. Independent candidates are barred from standing and Kazakhstan has never held an election judged free and fair by credible observers.

Tolymbekov and Tulesova were detained by the police during the marathon and sentenced to two weeks in jail for violating public assembly laws.

The two were released on May 5, one day before their sentence had ended, for health reasons, independent online magazine Vlast.kz reported. However, the next day, a military enlistment officer and a policeman found Tolymbekov, 20, in an Almaty café and took him to the enlistment office. Tolymbekov said the draft board ignored his certificate confirming a medical exemption.

“I will be taken to the station and put on the train soon. I couldn’t even say goodbye to my friends,” he told Vlast.kz by telephone on May 17.

Two days earlier another activist, 24-year-old Aslan Sagutdinov from the city of Uralsk in northern Kazakhstan, was also called into the local enlistment office. He believes the call-up is punishment for his activism.

On May 6, Sagutdinov was detained by police when he stood on the main square in Uralsk holding a blank sheet of paper. He said he wanted to prove there is no freedom of speech and democracy in Kazakhstan. To many, he succeeded.

He was allowed to go home that day; the police couldn’t figure out what charges to press. But on May 15, Sagutdinov was summoned to the enlistment office for a medical examination. Military recruiters had not bothered him since 2016, when he provided a medical certificate showing he had an aneurysm. This time, the document did not convince the military officers, Sagutdinov said.

All Kazakhstani men between the ages of 18 and 27 are required to serve at least one year in the military. Health concerns and physical disabilities are the most frequent reasons for a deferment. Given the widespread corruption throughout the former Soviet Union, however, many people in the region believe draft deferments are often bought or arranged by the well-connected.

“We are alarmed by the pressure on Beibarys and fear that in the light of his conviction for the April 21 protest and ongoing pressure in retaliation for his civic activism, he will be at real risk of serious harassment and ill-treatment should he begin his military service at the present time,” the statement says.