A joint venture with China has edged Kazatomprom, the world’s largest producer of uranium, into the nuclear fuel production cycle. 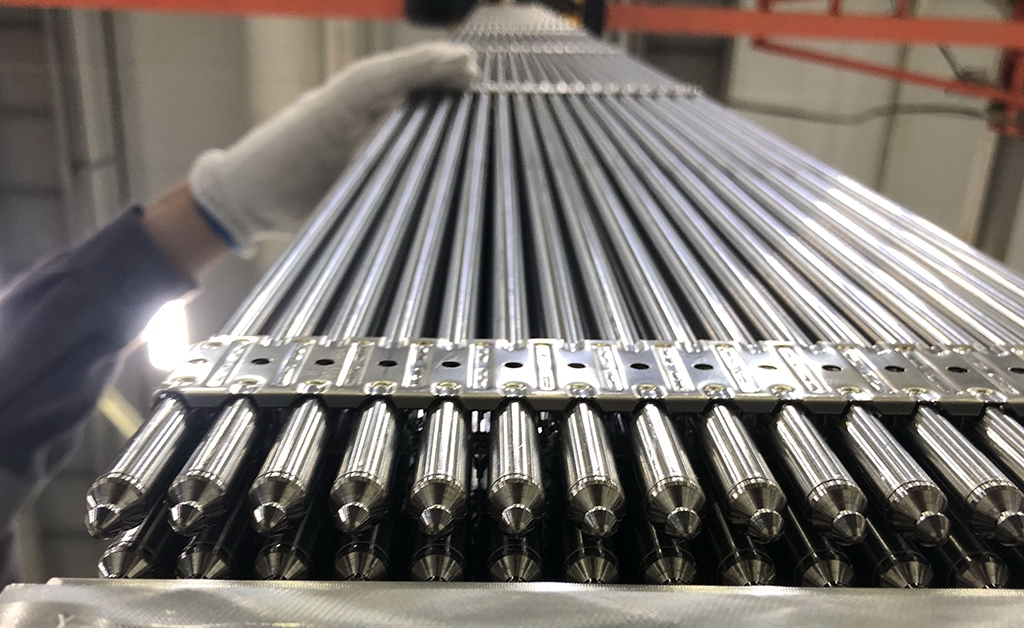 One of the fuel assemblies destined for China (handout)

A Kazakh-Chinese joint venture has made its first delivery of fuel assemblies to nuclear power stations in China, uranium giant Kazatomprom has said.

The delivery is an important landmark in a growing atomic energy relationship between Beijing and Astana.

In a December 7 statement, Kazatomprom said that 30 tons of low-enriched uranium (LEU) had been sent by rail in the form of nuclear fuel assemblies (large bunches of fuel rods) to China where they had been “received by their end user," the China General Nuclear Power Corporation.

The French-designed assemblies were manufactured at an Oskemen plant controlled by a company called Ulba-TVS LLP, which is 51 percent owned by Kazakhstan’s state uranium giant Kazatomprom and 49 percent by CGNPC – China's largest state-owned nuclear company.

The plant has the capacity to produce up to 200 tons of LEU equivalent per year in the form of ready-to-use rods loaded with processed uranium fuel pellets. The CGNPC will employ them in nuclear reactors.

Kazatomprom’s announcement comes just over a year after the plant opened.

The deal to supply CGNPC is expected to last at least 20 years, Kazatomprom has said.

CEO Yerzhan Mukanov was quoted in the statement as saying the delivery had affirmed “the reputation of Kazatomprom as a reliable and preferred supplier in the global nuclear fuel market.”

While Kazatomprom has for some time been the world’s largest producer of uranium, the joint venture with CGNPC has edged it forward in the production cycle.

The uranium used for the fuel assemblies was “mined in Kazakhstan and processed at the Ulba Metallurgical Plant,” the statement said, referring to a wholly Kazatomprom-owned facility that hosts Ulba-TVS LLP.

It made no mention of the fuel division of Russian nuclear giant Rosatom, TVEL, which said in November 2021 that it had supplied Ulba-TVS LLP with a first delivery of LEU and would be ensuring further deliveries from its plant in Novouralsk, Russia “on a regular basis in the framework of an ongoing commercial contract.”

Prior to selling its stake back to Rosatom in 2020, Kazatomprom held a 12.5 percent share in the Novouralsk plant, known as the Ural Electrochemical Integrated Plant, via a joint Russian-Kazakh enterprise called Uranium Enrichment Centre (UEC).

As part of the deal, Kazatomprom retained a single share in UEC in order to guarantee that it could still make purchases from the plant.

Kazakh officials have on more than one occasion said they intend to observe Western-led sanctions against Russia since Moscow launched a full-scale invasion of Ukraine in February.

Rosatom is not presently the target of any sanctions, much to Kyiv’s chagrin.

Moscow and Beijing are at any rate developing their own nuclear relationship. Back in September, Rosatom said it had delivered its first batch of nuclear fuel for a fast neutron reactor being built by China National Nuclear Corporation, China's other major atomic energy company, in the southern province of Fujian.