The president has doubled down on his claims that terrorists with foreign backing are behind the protests, which began this week over fuel prices then snowballed. 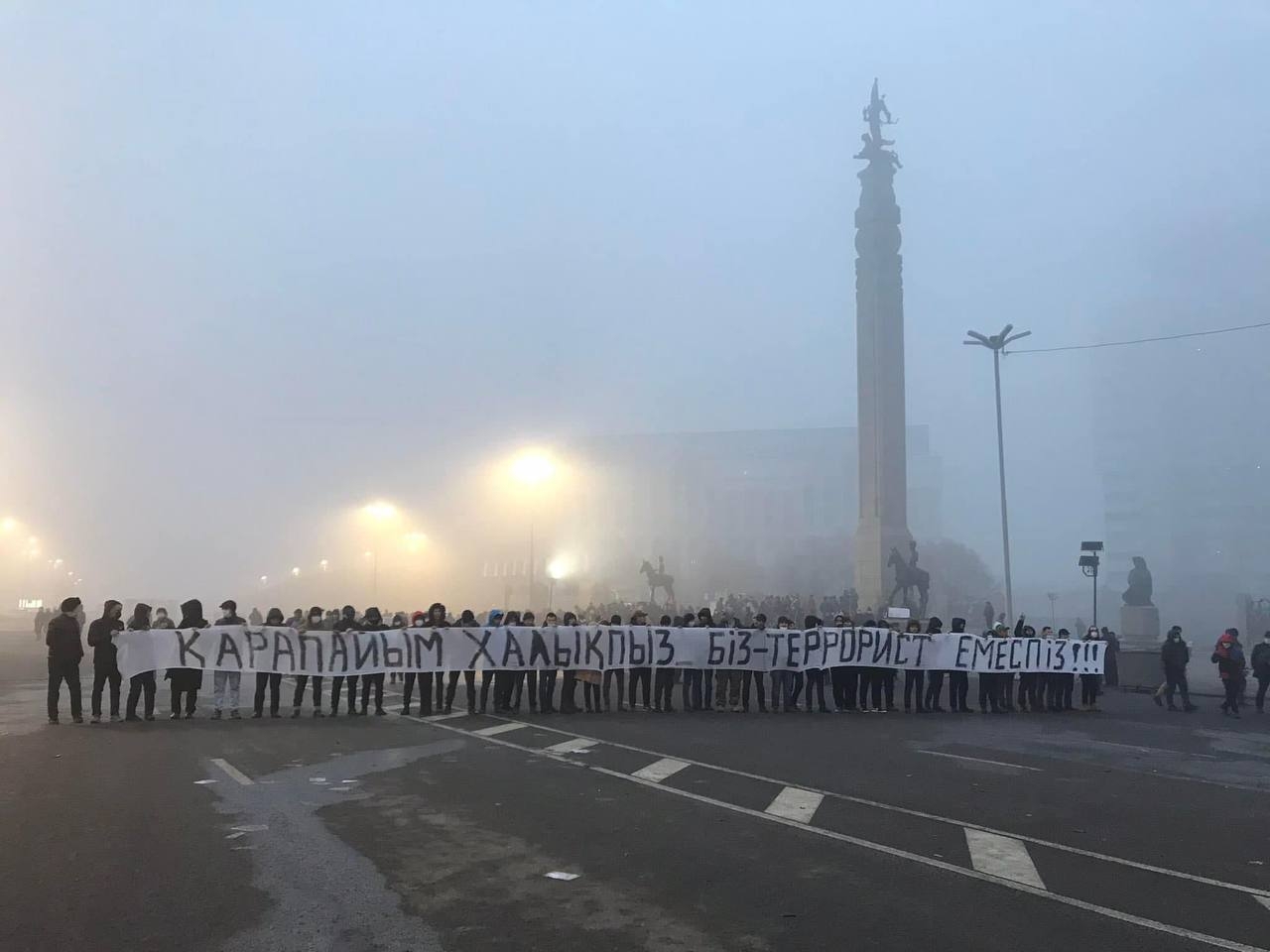 Protesters in Almaty's Republic Square on January 6 hold a sign saying, "We are ordinary people, not terrorists." (social networks via Vlast.kz)

Kazakhstan’s President Kassym-Jomart Tokayev has upped the ante in the battle to suppress the deadly protests that have swept through the country by issuing a shoot-to-kill order in a tough-talking speech that laid out an uncompromising stance not only toward protesters but also independent media and civil society.

“The security forces and the army have been ordered by me to shoot to kill without warning,” Tokayev said in a televised address on January 7.

Tokayev rejected out of hand calls “from abroad” to hold talks with protesters to seek a peaceful resolution to the crisis that has cost dozens of lives.

“What idiocy!” he said. “What kind of negotiations can there be with criminals, murderers?”

Tokayev doubled down on his claims that terrorists with foreign backing are behind the protests, which began on January 2 over fuel price rises then snowballed, by insisting there are foreigners present.

“We have had to deal with armed and trained bandits, both local and foreign,” he claimed. “Precisely with bandits and terrorists. That is why they have to be eliminated. And that will be done in the near future.”

Tokayev claimed that 20,000 “bandits” had emerged from sleeper cells to attack Almaty with a clearly defined strategy and reporting to a central command point.

Tokayev’s hard-line language was remarkable for echoing that of Russian President Vladimir Putin, who has historically employed terms such as “bandits” and “liquidation” when speaking of rebels in the wayward region of Chechnya, for example.

Tokayev and Putin spoke by telephone on January 7 to discuss the ongoing deployment of troops in Kazakhstan under the auspices of the Moscow-led Collective Security Treaty Organization.

“They discussed the situation in Kazakhstan and joint efforts being pursued within the CSTO mandate to combat international terrorism and ensure order and security for Kazakh citizens," Putin’s spokesman, Dmitry Peskov, told reporters.

A complement of around 2,500 soldiers is flying in from Armenia, Belarus, Kyrgyzstan, Russia and Tajikistan, according to Kazakh officials.

In his address, Tokayev took aim, Putin-style, at the independent media and civil society, using hard-line language that reflected an astonishing about-turn from a president who came to power in 2019 promising to deliver to his people a “Listening State.”

“The tragic events in our country again bring into focus problems of democracy and human rights,” he said. “Democracy is not all-permissiveness and, still less, incitement, including in the blogosphere, to illegal acts.”

Law and order were the guarantee of prosperity, and that principle “in no way tramples upon civil liberties and human rights,” he said.

“On the contrary, as the tragedy in Almaty and other towns in Kazakhstan shows, it is precisely law-breaking, all-permissiveness and anarchy that lead to infringements of human rights.”

Tokayev said he had liberalized the right to free assembly, and attacked “so-called ‘human rights defenders’ and ‘activists’” who abused this and “put themselves above the law and believe they have the right to gather where they want and chatter about what they want.”

“Because of the irresponsible actions of these poor excuses for activists, police are being distracted from their main function of guarding law and order,” he said.

He had harsh words for the press, too, lambasting “so-called free media and overseas actors who are far from the fundamental interests of our multi-ethnic people.”

“It can be said without exaggeration that all these irresponsible demagogues have become accomplices to the unfolding of the tragedy in Kazakhstan. And we will react harshly to all acts of legal vandalism,” he said.

This was tough talk from a president who previously vowed greater liberalism and made a point of launching a dialogue with civil society. It veered close to the language employed in Russia to condemn the press and civil society groups as “foreign agents.”

Concluding, Tokayev said he had no doubt Kazakhstan would “quickly overcome this dark period in our history.”

The situation on the ground in Almaty was still uncertain as January 7, although much of the heaviest fighting between government troops and their unknown armed antagonists appeared to have dissipated.

Internet connections, which were unplugged all across the country since early January 6, were still down. Tokayev vowed that was poised to change.

“As the situation is stabilizing, I have decided to turn on the internet in some regions of the country at certain time intervals. This decision, I am sure, will have a positive effect on the life of our citizens,” he said.

International air routes are gradually being restored too. Flights between the capital, Nur-Sultan, and a number of cities, including Moscow, Dubai and Minsk, were planned for January 7.

The Industry Ministry has said, however, that Almaty airport will only be used to service military planes.

Russia’s Defense Ministry says it is flying in CSTO troops on 70 Ilyushin-57 and five An-124 heavy transport aircraft. The ministry said CSTO troops will not be involved in the operational and combat activities of local law enforcement and army units.

“Peacekeeping unit will carry out tasks to protect vital important facilities, such airfield and key social infrastructure facilities,” a representative for the ministry told media.

China, which also shares a long border with Kazakhstan, has remained mostly silent on the crisis. The Foreign Ministry did issue a statement on January 7, however, to say that it remains in close communication with Kazakhstan to help ensure calm in border areas.

According to Kazakhstan Interior Ministry updates issued around lunchtime on January 7, at least 3,800 people, described by the authorities as rioters, had been detained. Officials also said at least 18 law enforcement officers and 26 people identified as members of armed groups have died in the fighting. There is no clarity about the ultimate overall death toll when accounting for unarmed people not involved in clashes, however.