Kazakhstan: Is Shymkent Tycoon a Coup Plotter or Fall Guy? 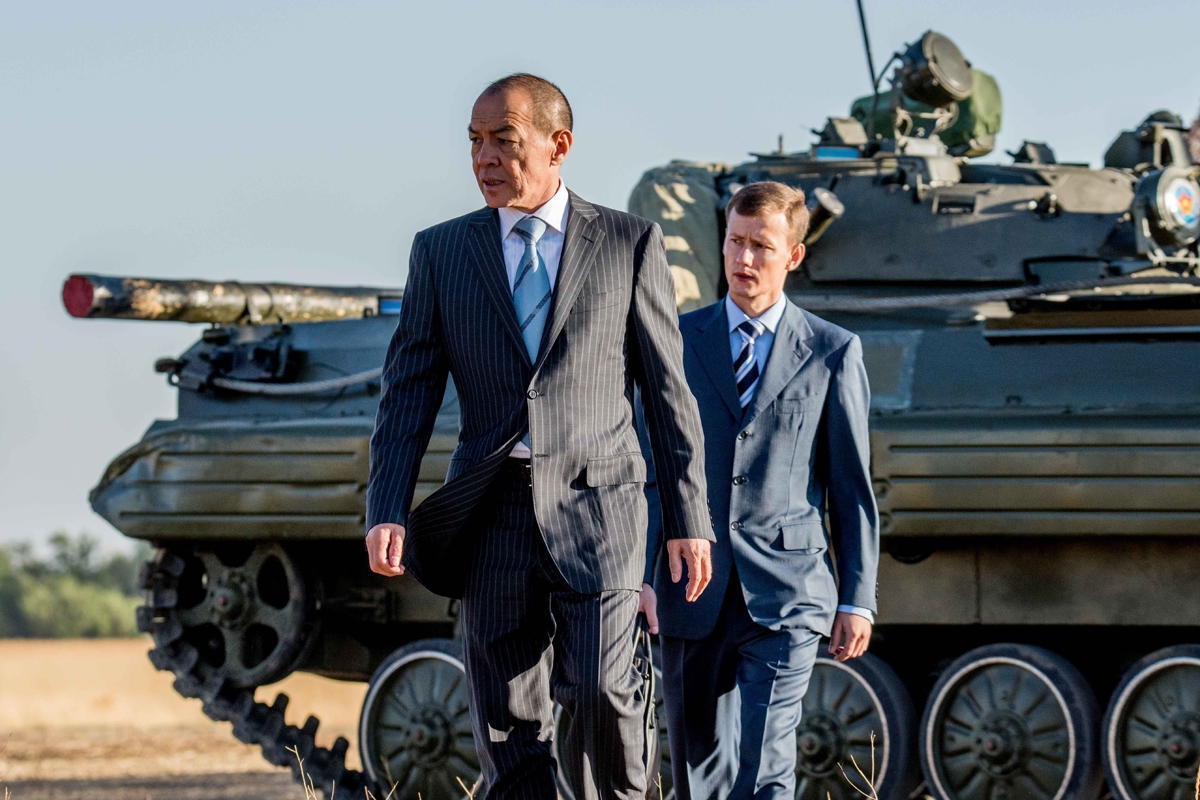 Tohtar Tuleshov (front) at war games that he organized for his father’s birthday in 2015. (Photo: Kazakhstan’s National Security Committee)

A military court in Kazakhstan last week began hearings behind closed doors in the trial of one of the country’s wealthiest men.

Tohtar Tuleshov, a prominent brewery tycoon in the southern city of Shymkent, stands accused of planning and financing an attempt to violently seize power. Court proceedings are being kept classified, but the tone for the state’s case against Tuleshov was set by a documentary aired on private television station KTK over the weekend.

The documentary, titled “Shymkent Excesses,” dwelled for the most part on Tuleshov’s allegedly criminal behavior, as well as his supposed fondness for garish opulence. Although the makers of the documentary never spell it out, circumstantial evidence indicates that the content and slant of the program constitutes a public relations assault on Tuleshov that is seemingly intended to justify the government’s case against him.

Those familiar with Tuleshov’s background tend to agree that he makes an unlikely political agitator. One theory being circulated by political observers is that the downfall of Tuleshov constitutes a setback for political players in the south of Kazakhstan, in the regions around where the businessman had his power base. It thus may be a signal of political infighting behind the scenes.

“All of this suggests that Tohtar Tuleshov may in fact just be a pawn in the fight between intra-elite groups, whereby some groups are trying to discredit others by implying they have ambitions of securing power, and by showing their links to the Shymkent businessman,” said analyst Dosym Satpayev in an interview published by the Tribuna newspaper.

“As experience shows, to hit at larger elite figures, first there are arrests of lesser players like Tohtar Tuleshov, who had a strong position only at the regional level,” Satpayev added.

The hypothesis aired by the broadcaster appears to closely adhere to the line advanced by prosecutors. Tuleshov is alleged to have distributed money to activists in a number of cities — Astana, Almaty, Atyrau, Oral, Kyzylorda — to finance a wave of protests against a land reform law adopted in 2015. Those protests were, it is suggested, meant to culminate in political unrest that would end up with Tuleshov being appointed vice president. Curiously, the land rallies only began to pick up momentum this past May, at which point Tuleshov had already been in jail for four months on narcotics and firearms possession charges.

Azamat Maitanov, deputy editor of Ak-Zhaiyk newspaper, told EurasiaNet.org that he believed the attempts to link Tuleshov to the land protests were absurd. While there are perhaps other grounds on which the beer tycoon might be prosecuted, organizing coups is not in his style, Maitanov said.

“After the wave of rallies, the secret services had to concoct a scenario that completely discredited the idea of popular protests. So they floated this compromising information about paid rallies instigated by outside forces who had paid $200 to each protestor, and so on,” Maitanov said. “For further development of this theme, they needed a primary villain.”

Tuleshov ostensibly made his money through his ownership of the Shymkentpivo brewery, which has since been acquired by ATF Bank in exchange for writing off around $100 million worth of debts.

Shymkent is synonymous for many in Kazakhstan with organized crime, so speculation linking the city’s business leaders to the underworld is hardly new. KTK’s film, however, sets out to shock viewers with a lurid account of alleged transgressions.

The opening of show presents scenes from a $700,000 wedding for one of Tuleshov’s daughters, Aitkul. Among the guests there are government officials, criminal kingpins, Russian pop stars, descendants of the classic Russian poet Alexander Pushkin, Italian crooner Riccardo Fogli, the Prince of Montenegro and Macedonia and many others.

Other daughters were similarly spoiled. Particular attention is paid to Sevil, who is shown receiving birthday presents of a Rolex and Bentley automobile. “My dad is the most upstanding man in the world, I admire him more than anybody. There is nobody other than my dad that I respect or, I hope, will respect,” Sevil said in footage aired in the documentary.

One young man from Shymkent featured in an interview with KTK told of how his brother was once partying at a nightclub where he unwittingly shoved Sevil Tuleshova, whom he did not recognize, because she was behaving rowdily. A few days later, a gang of toughs in masks purportedly kidnapped the brother off the streets of central Shymkent and took him to a gym on the grounds of Tuleshov’s brewery. Once there, the victim was supposedly bound to a radiator with handcuffs and beaten. He was then hung up by his wrists to a hook and used as a punching bag until the morning. The man offering this testimony to KTK had his face covered and his voice distorted to disguise his identity, and since he admits they never filed a police report, it is impossible to corroborate the account.

Some of the most serious accusations leveled at Tuleshov in the KTK program concern his alleged association with international organized crime kingpins. In July, the National Security Committee alleged Tuleshov had “maintained contacts with and supplied funding to leaders and authorities in a trans-national criminal group known abroad as the Brothers’ Circle.”

The very existence of the Brothers’ Circle is debated, but the US Treasury Department has identified numerous prominent criminal figures from nations across the former Soviet world as belonging to this group.

KTK added some spice to this angle by alleging that Tuleshov mercilessly used a small army of 90 well-armed heavies to wipe out his rivals in crime and business. The documentary notes two examples of victims that do not appear to have received any prior media coverage. One undated incident in the village of Karabastau, in the South Kazakhstan region, saw an alleged local organized crime figure, identified as Daulet Zhumadilov, being shot dead at the gates of his home. Zhumadilov’s body was reportedly found with an ear missing, which KTK describes as a hallmark of an underworld hit.

It is not clear that any of the crimes allegedly linked to Tuleshov in the KTK program are under examination at his ongoing trial. They have not previously been linked to the businessman. There is no public record, outside of the KTK program, of these alleged incidents.

Prosecutors certainly wish to convey the impression the evidence against Tuleshov is voluminous. The indictment consists of 300 volumes of material. More than 100 witnesses are expected to give testimony, including 17 injured parties. Along with Tuleshov, 25 people, including some former high-ranking officials, are on trial.

Part of the case rests on the proposition that while Tuleshov’s extravagant spending on luxuries and private armies grew, his debts kept mounting. Authorities have also alleged that the businessman had massive outstanding loans, which KTK estimated at $200 million.

Citing investigators, the KTK program hinted that it was these liabilities that prompted Tuleshov to consider instigating a drawn-out popular street revolt in the mold of the one that led to the toppling of Kyrgyzstan’s President Askar Akayev in 2005.