But there is no papering over the festering disillusionment. 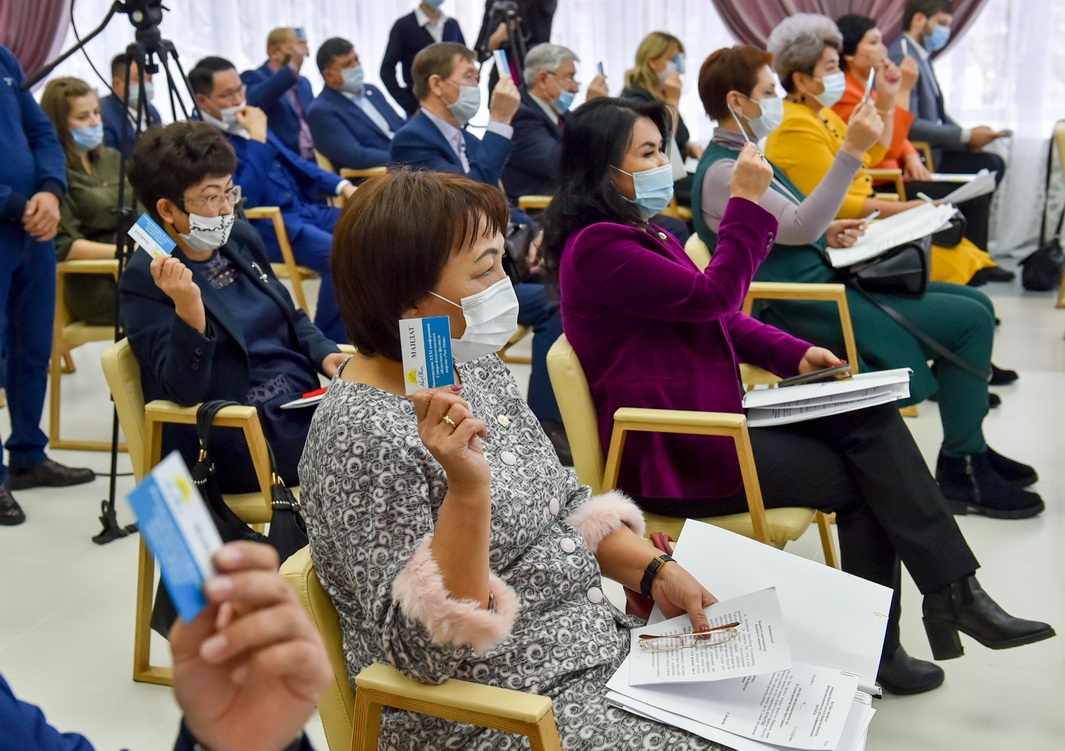 The electorate in Kazakhstan will sleepwalk through next month’s parliamentary elections, which will be utterly dominated, as usual, by the Nur Otan ruling party.

Turnout will be strong, because if there is one thing the authorities are effective at, it is press-ganging the masses into taking part in pseudo-democratic performances. But there is no papering over the festering disillusionment.

“We have no choice. This will be the same regime and the same pocket political parties we have had for 30 years. For us citizens, voting is senseless,” Manshuk Yergaliyeva, the manager of a hardware store in Almaty, the business capital, told Eurasianet.

By rights, things should be electorally bleak for Nur Otan. The economy is experiencing a deep slump, unemployment is becoming a scourge and prices for basic staples are spiraling. While the country’s rulers are quick to blame all this on the COVID-19 emergency, the excuse is wearing thin on a population that has long perceived the roots of its woes in corruption, cronyism and mismanagement.

“We could have lived as prosperously here as they do in Dubai thanks to our oil wealth. If they didn’t steal it all,” Yergaliyeva said.

Four other parties are competing for the 98 seats up for grabs – a further nine deputies are picked by a president-vetted institution called the Assembly of Peoples.

It’s all a show. None of the non-ruling parties have over their history engaged in any serious criticism of government policy. Parties who might be disposed to be more critical have routinely been thwarted in their attempts to seek registration, in spite of President Kassym-Jomart Tokayev’s recent pledge to inject more dynamism into the political scene.

Nur Otan is not entirely blind to the potential dangers of presiding over a situation in which the street remains the only place for the public to vent their anger or, no less perilously, society slides into a state of chronic and irreversible disenchantment. In a choreographed exercise intended to gull voters into believing it is engaging with public sentiment, the party held a series of primary votes to determine the makeup of their electoral list.

At the party conference in Nur-Sultan on November 25, a definitive list of 126 candidates was presented to the public. Almost two-thirds of the names did indeed belong to winners of those pre-election contests.

Another 49 candidates handpicked by the party executive included familiar faces. One was Dariga Nazarbayeva, the eldest daughter of Nursultan Nazarbayev, who stepped down as president in 2019 but continues to lead Nur Otan. Others included the current Majilis speaker Nurlan Nigmatulin, Prime Minister Askar Mamin, the head of the presidential administration Yerlan Koshanov, as well as the first deputy chairman of Nur Otan, Bauyrzhan Baibek, and other Nazarbayev lackeys.

Nur Otan has also proudly trumpeted the fact that almost one-third of its party list is represented by women and that the average age of candidates had dropped by four years, to 48, compared to the 2016 legislative election.

There were evidently still some last-minute nerves this theater might not do the trick, though.

There is one lawfully registered party that does sometimes talk in faintly oppositional tones. The All-National Social Democratic Party, or OSDP in its Russian acronym, has competed in parliamentary elections before. In both the 2012 and 2016 elections, it managed to attract only around 1.8 percent of the vote. That was a marked dip from their first outing in 2007, when it earned 4.5 percent of ballots cast. Nur Otan won all the available seats at that election.

Given the background against which this election is playing out, the OSDP had a chance like never before to capitalize on protest moods and surpass the 7 percent threshold to get into parliament. After all, erstwhile OSDP member Amirzhan Kosanov made a half-decent showing in the 2019 presidential election, when he won 16 percent of the vote – a lot for a non-incumbent by Kazakhstan’s standards. And many thought he had been cheated. Following the election, Kazakhstan saw an abnormal wave of protest rallies that seems to have spooked Tokayev and his allies.

Alibek Suleimenov, a consultant for a retail chain Magnum, said he was among those who voted for Kosanov.

“I had hoped that if a majority of people who wanted change, an improvement in their lives, would go and vote for Kosanov, there might be a chance. […] I was naïve,” he told Eurasianet.

It came as a surprise, therefore, when the OSDP announced, on November 27, that they were boycotting the whole affair. They described ducking out as a “protest against the current order.”

It is not clear quite what happened. But there are suspicions that the responsibility for this decision may lie with the gadfly of ruling and self-described opposition parties alike – the fugitive former banker and Europe-based government foe Mukhtar Ablyazov.

Ablyazov routinely takes to social media to pour bile on the whole political spectrum, including OSDP, whom he accuses of being secret government stooges. Even so, he provoked some surprise when, on November 17, he urged his supporters to vote for OSDP all the same, “so as to take away votes from Nur Otan.”

That must have generated some panic in OSDP ranks. Ablyazov is considered a power-hungry extremist and a ruthless crook by Kazakhstan’s rulers. Many of his supporters have earned lengthy prison sentences merely for expressing sympathy for his position in private messages.

For a week, the OSDP forged ahead with its plans to run. On November 25, deputy party chairman Aidar Alibayev declared that the goal was to win and that no thought had been given to boycotting the election. Two days later, however, the party summarily declared it was boycotting the contest.

Political analyst Kazbek Beisebayev believes the OSDP came under pressure from above and was left with no choice.

“The authorities have cleared the political field so that the parliamentary elections could be held without any risk of a protest vote,” he said.

The thankless task of conveying a sense of competition has, as a result, fallen to what are derisively known as “pocket parties,” some of which have undergone their own minor facelifts.

The Communist People’s Party of Kazakhstan, which has seven MPs, has ditched the “communist” tag, which was never an especially useful descriptor anyhow, and now goes by just People’s Party. Leader Aikyn Konurov said the party will still adhere to its supposedly socialist leanings, but that it is shedding the class war aspect of its ideology.

Birlik (Unity), which failed to get into parliament last time around, is now called Adal (Fair). The party’s election list is made up mostly of new faces, but it is still not that clear what values or ideas it actually represents. The vaguely articulated party program talks loosely about modernizing all spheres of society.

The pro-business party Ak Zhol, which also has seven seats in parliament, has typically been a reliable supporter of the policies of the president of the day. Party leader Azat Peruashev blubbed on television when Nazarbayev announced last year that he was stepping down.

Peruashev did, though, make a performance of departing from his uber-loyalist line at the Ak Zhol congress on November 20, when he accused the government of systemic failures in its handling of the coronavirus outbreak.

“Trust toward state institutions is falling, partly because of the public’s fatigue with the monopoly over power wielded by the authorities,” he said. “The country needs radical changes.”

The elections are just a formality that legally need to be performed. But Beisebayev believes they are important inasmuch as they may presage plans to evolve the ruling order away from presidentialism to a more parliamentary system.

That process would represent the final passage of a transition initiated by Nazarbayev’s departure as head of state last year. Tokayev is merely a placeholder, Beisebayev said.

There are those who believe this managed process can be pulled off. Andrei Chebotarev, director of the Alternative Research Center, for example, thinks the People’s Party can be cultivated in its role as the government’s antagonist.

“The future parliamentary opposition will be represented by the People's Party, which will unite the leftist forces of the constructive opposition,” Chebotarev told Eurasianet. “Ideas of social justice and legal equity will find wide support in Kazakhstan.”

That might have been an easier trick to pull before COVID-19 came along. This crisis has fatally exposed the weaknesses of the ruling regime and voters appear less disposed than ever to be mollified by election-time dramaturgy.

“The authorities remember about us only before the elections,” Suleimenov, the retail consultant, said indignantly. “But where were they in the summer, when we were left alone with the deadly virus?”