Kazakhstan: Space-Launch Tourism Not Blasting Off as Promised 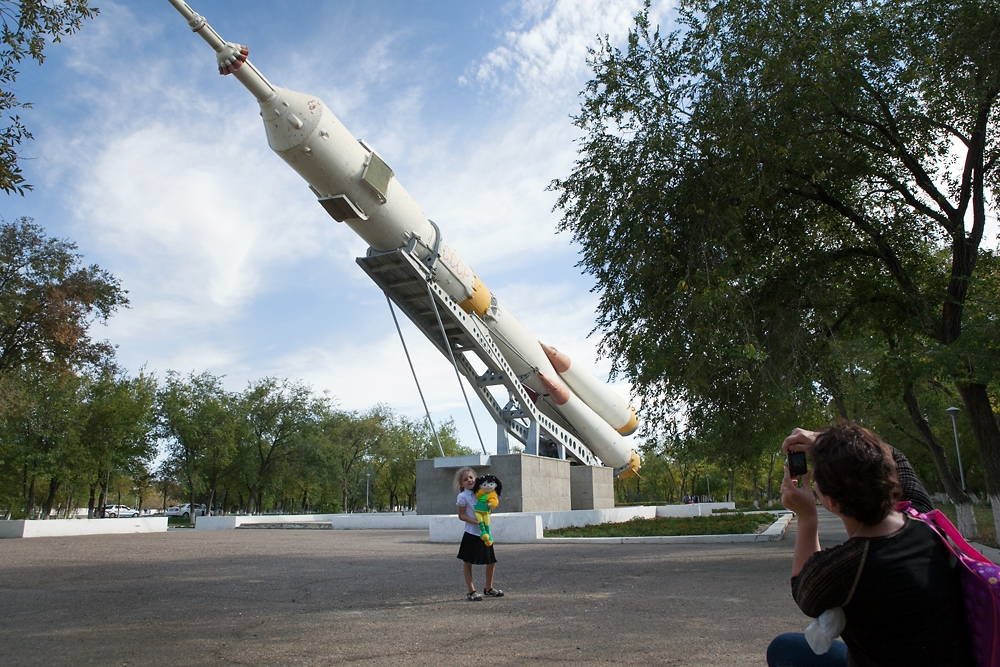 A child poses for a photo under a Soyuz rocket in a park in Baikonur, Kazakhstan. 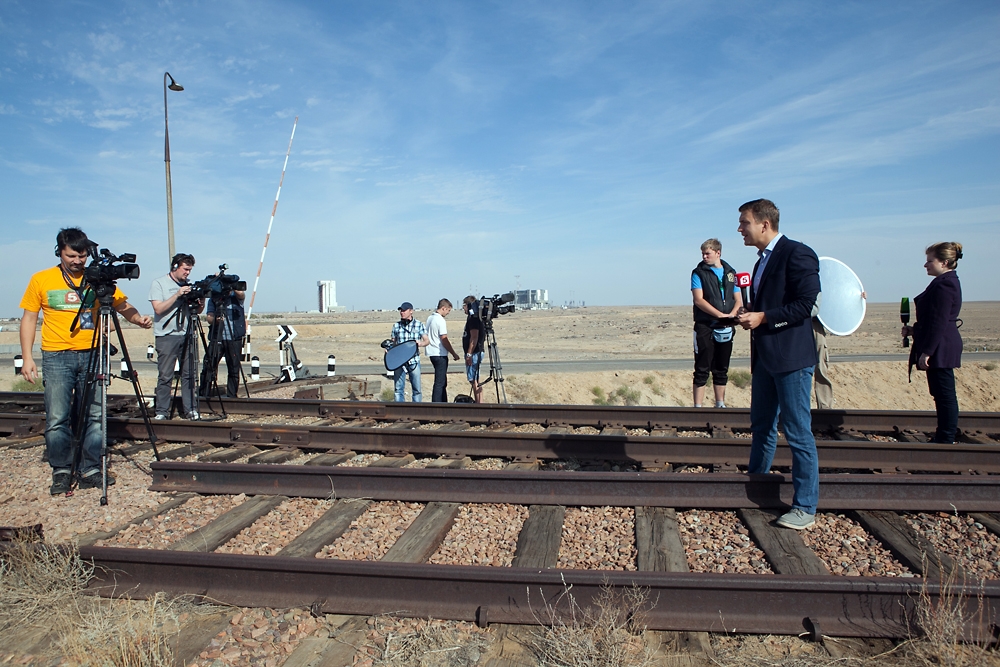 Russian television news crews film reports prior to a mission at the Gagarin Launchpad. 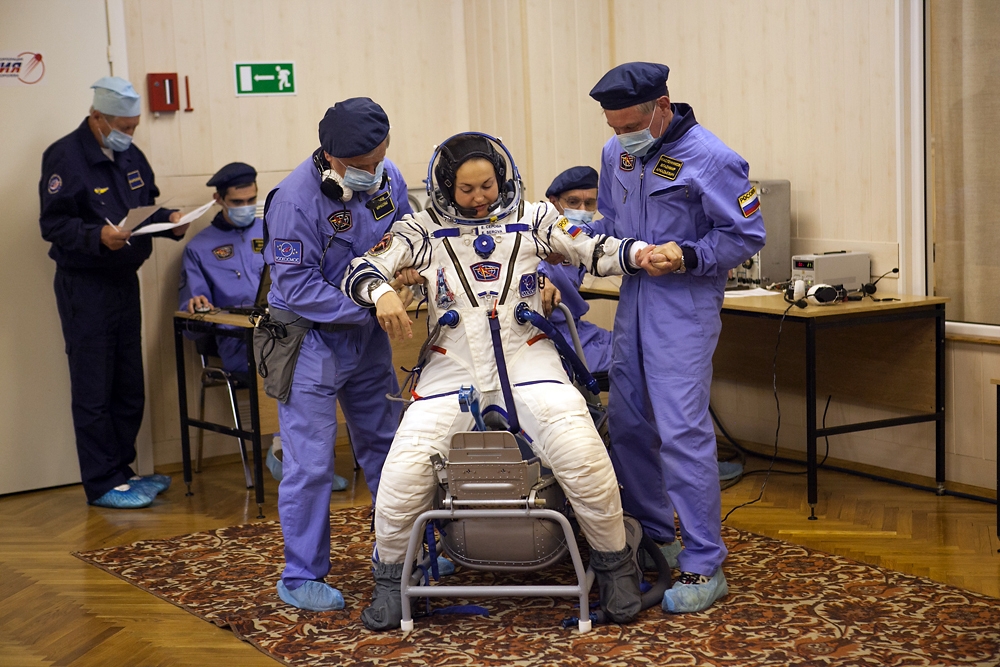 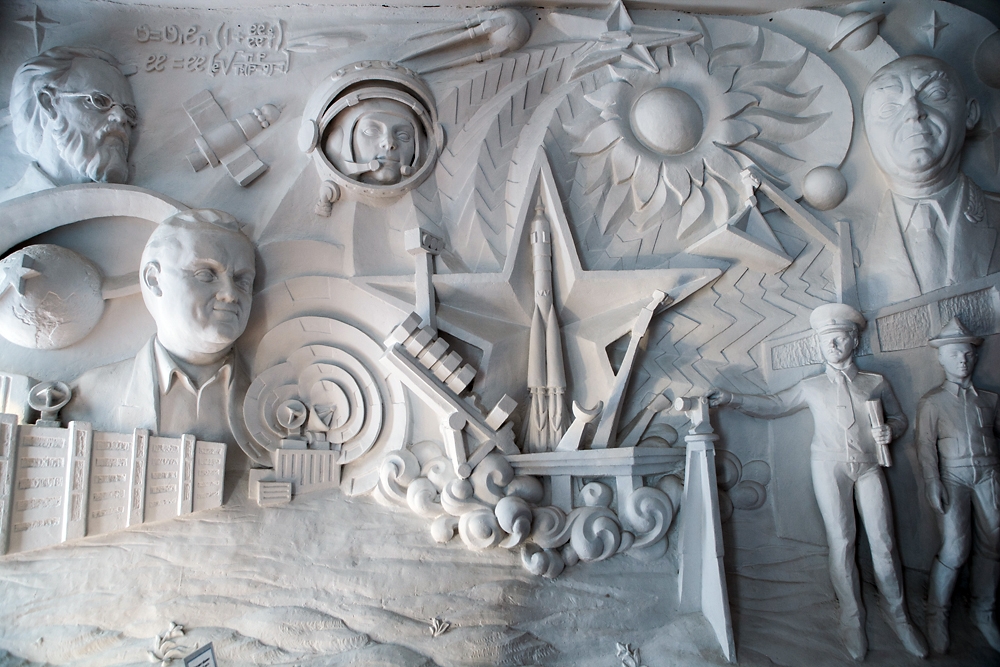 Inside a museum in Baikonur, a frieze depicts the early Soviet space industry. 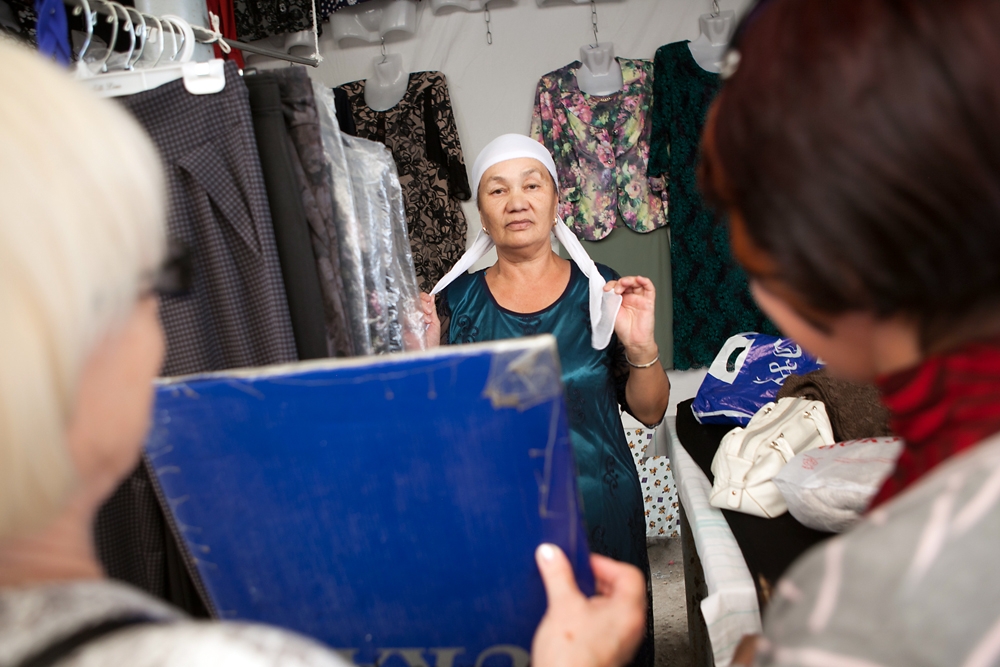 A woman tries on clothes at the bazaar in Baikonur, home of the Soviet and now Russian space launch program. 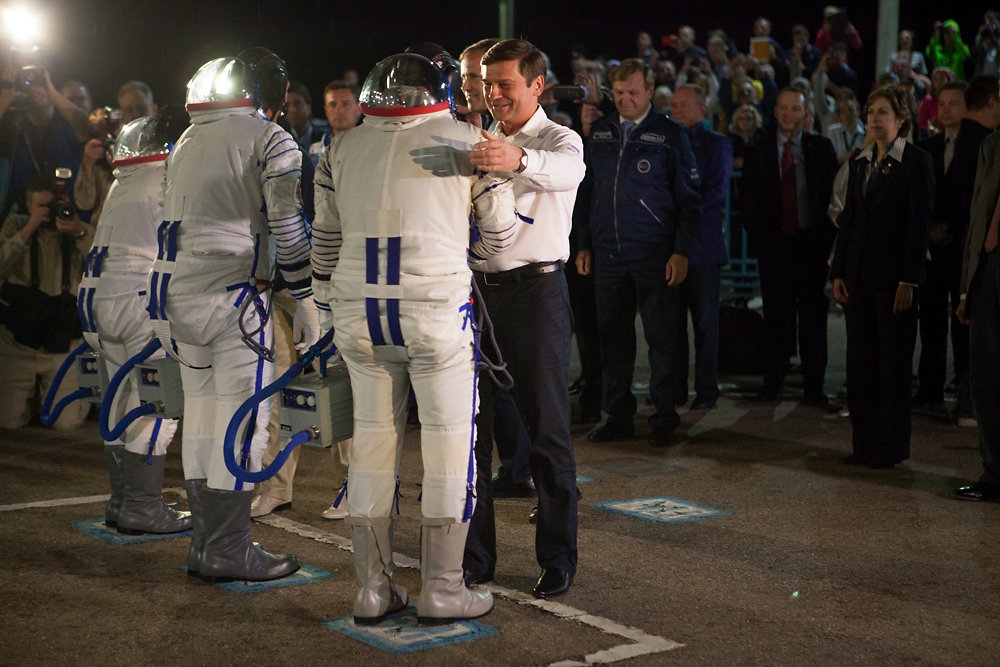 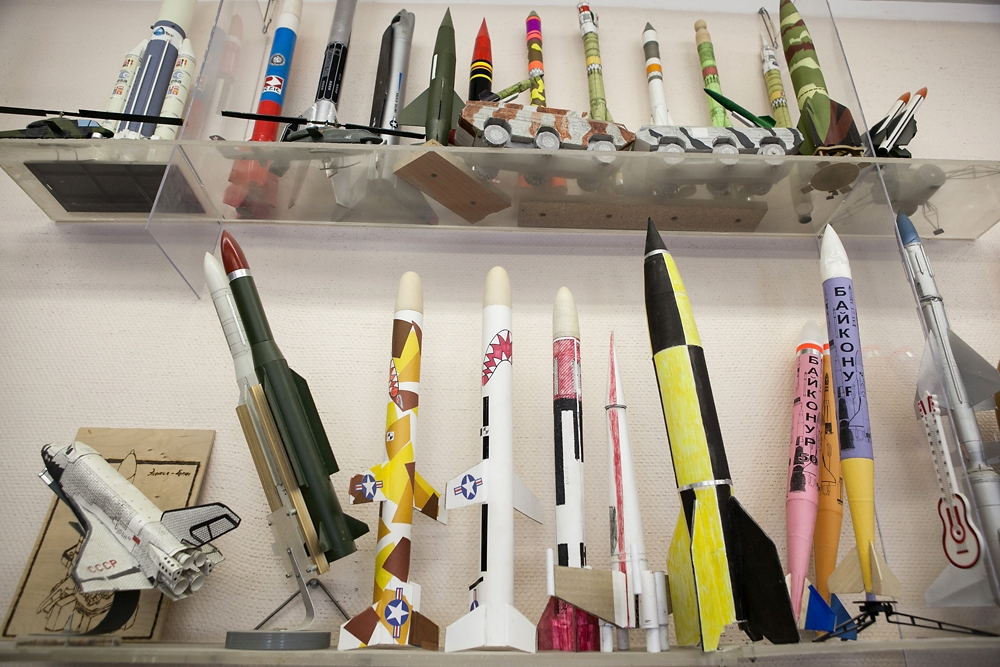 Toy rockets are displayed at a school for future engineers in Baikonur. 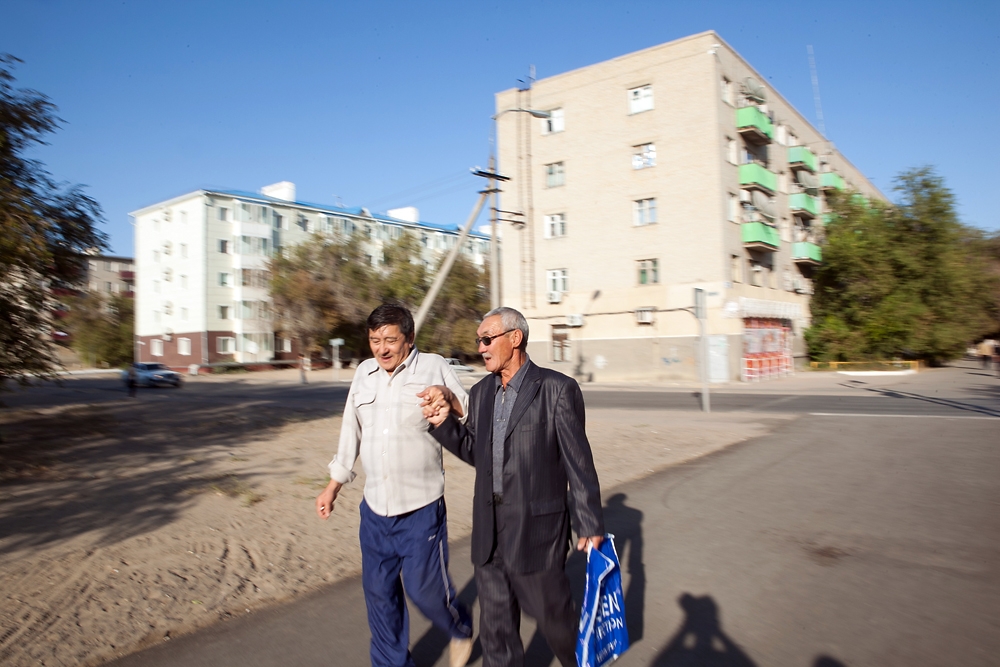 The city of Baikonur shares the same name as the vast cosmodrome about 20 kilometers away. 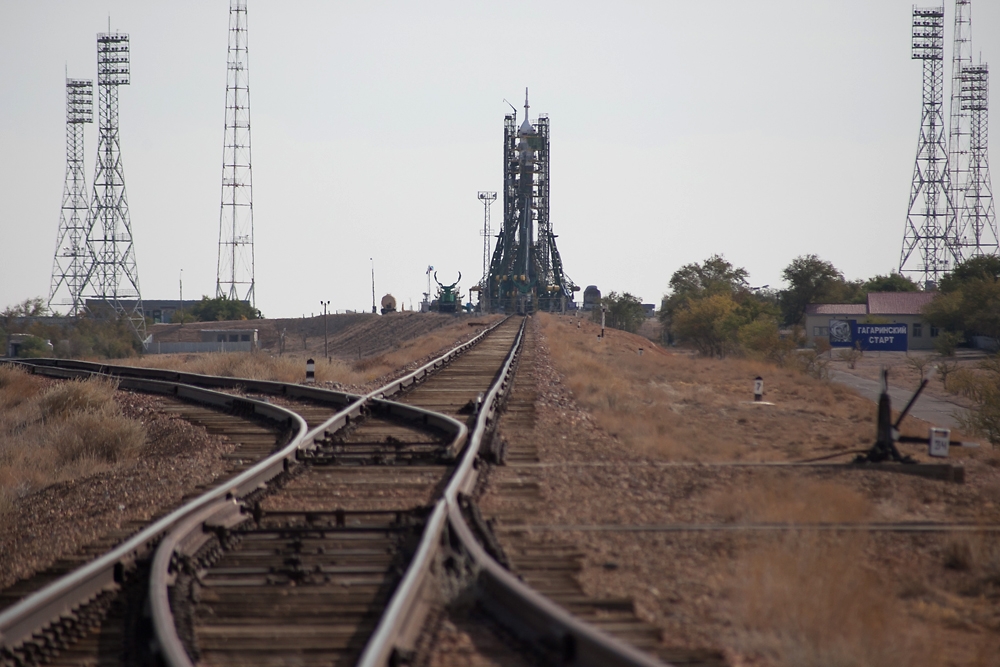 Hours before liftoff, a Soyuz rocket stands on its launchpad. 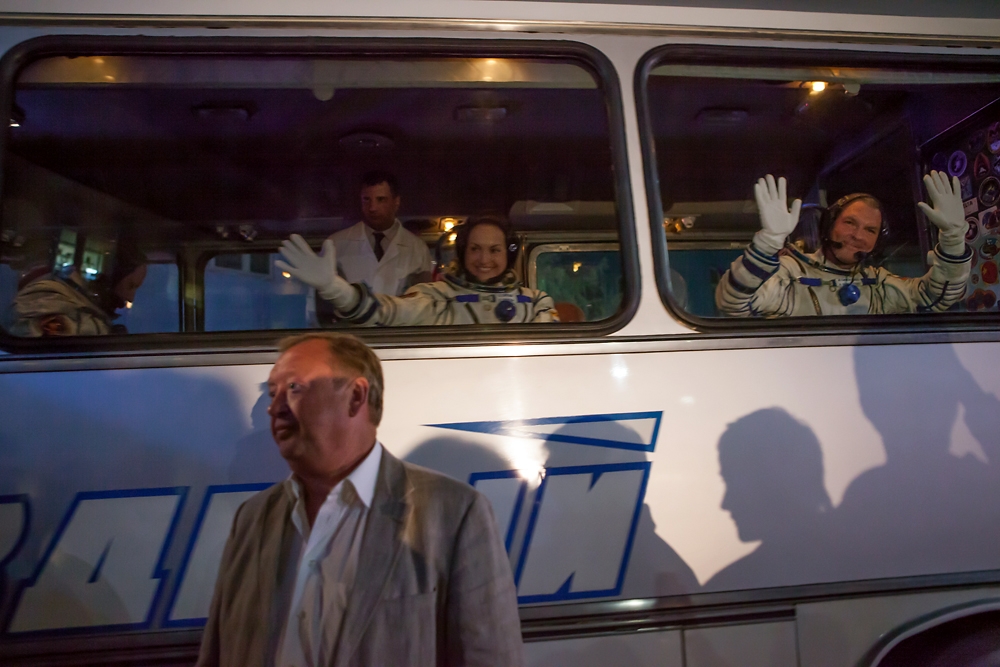 After donning their spacesuits, a Soyuz crew of three are bused to their rocket. 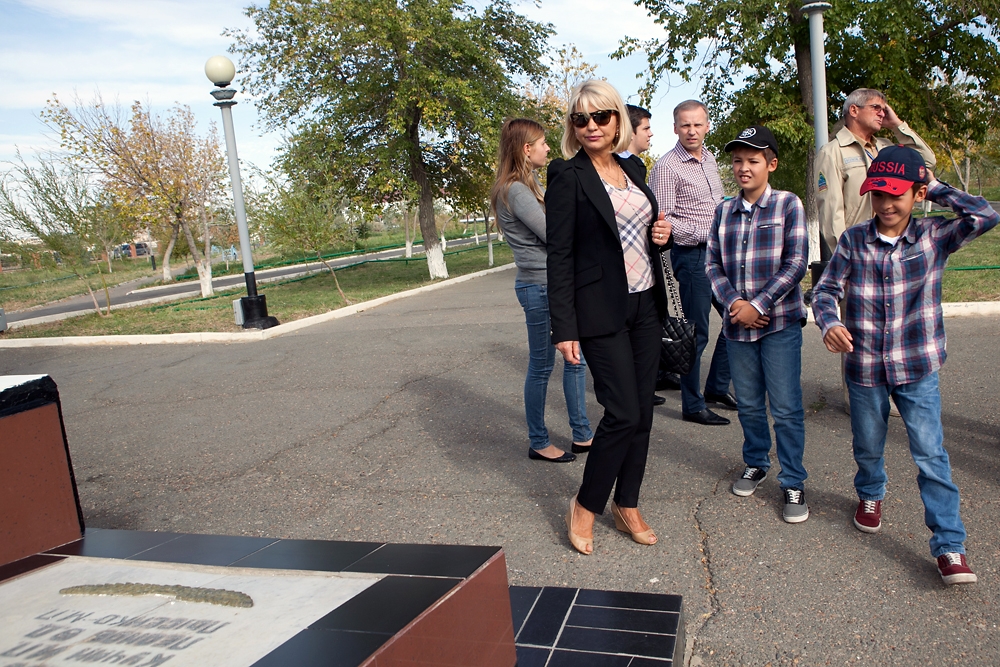 Tourists visit at a tomb for the dozens of engineers killed in the 1960 Nedelin launch-pad accident. 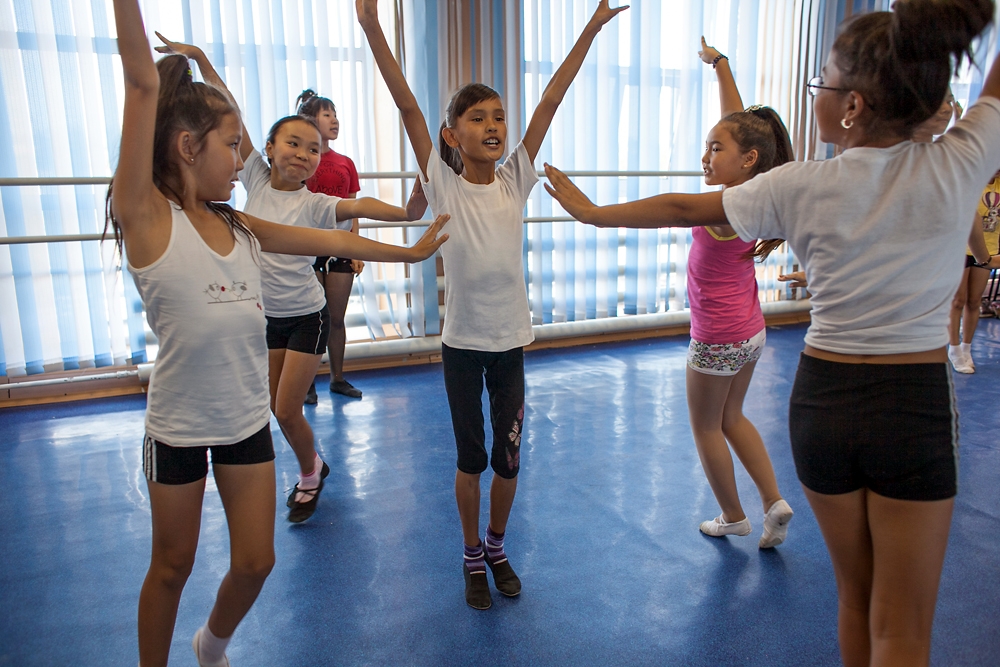 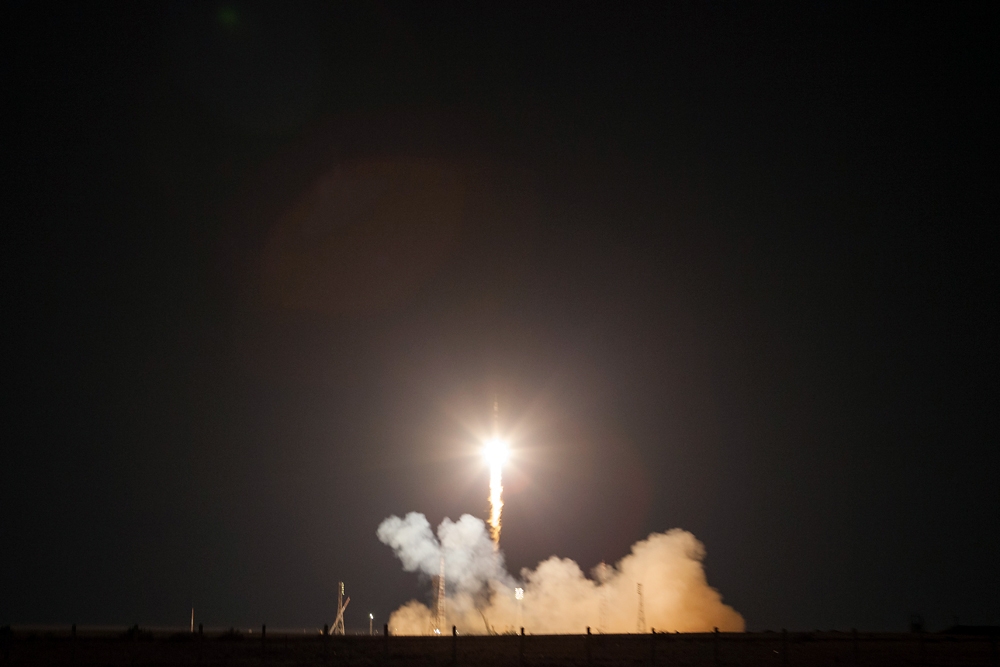 A Soyuz TMA-14M lifts off at the Baikonur Cosmodrome on September 26 with two Russians and an American on board.
prev
next

Tears welled up in Alexey Melnikov’s eyes as a spaceship carrying three astronauts lifted off from the Baikonur Cosmodrome several hours before dawn. The Russian-born, London-based computer programmer had wanted to see the breathtaking spectacle since he was a boy. As the rocket engines lit up the sky and shook varied VIPs into silence, here he was standing on the same stretch of steppe that saw Sputnik and Yuri Gagarin make history.

Eight minutes and 45 seconds after blasting off from the Russian-leased desert spaceport in Kazakhstan, the Soyuz capsule – carrying two Russians and an American – separated from the rocket and safely entered orbit en route to the International Space Station. The crowd cheered. A few bottles of vodka slipped from hand to hand.

About 20 miles away, David and Susan Doig were straining to see the launch from their hotel balcony in the town closest to the cosmodrome, also called Baikonur. Only after arriving from Australia did they learn that Russia’s Federal Space Agency, Roscosmos, would not allow them to watch the launch with the gaggle of journalists, engineers, astronauts’ relatives, and others wearing VIP passes like Melnikov and his partner, Kelly Rhodes.

Kazakhstan has long talked of turning Baikonur into a tourist destination. But visitors hoping to see rockets blast off from the historic cosmodrome are in for a crapshoot, and any serious expansion of tourism still faces significant hurdles.

Melnikov and Rhodes enlisted the help of a Moscow-based tour operator with close ties to Roscosmos, Vegitel Tour, which says it charges $5,400 per person, including transport from Moscow on "special Roscosmos charters" and accommodations in a four-star hotel. “We’ve been really impressed with the access,” said Rhodes. She will “never forget” watching astronauts launch from the same pad Gagarin used when he became the first man in space in 1961, or attending the private sendoff ceremonies. “Unless you’re a member of the [astronauts’] families, you can’t do better.”

The Doigs booked through Baikonur-based Tour Service, which charges $800 per person ($500 for citizens of Russia or Kazakhstan). That price does not cover transportation, but does include a room and three hearty heaps of mystery meat daily at the aging Tsentralnaya Hotel.

Missing the launch left the Doigs “gutted,” said Susan, a schoolteacher from Melbourne. She stressed, though, that Tour Service told them permission to enter the heavily guarded cosmodrome was not guaranteed.

Baikonur the town (formerly Leninsk) has retained its curious status as a closed, Russian-administered city within Kazakhstan. And alone it has little to draw tourists. The settlement – which dates from the 1950s and is now home to roughly 70,000 inhabitants – is cleaner than the average small Russian or Kazakh city, and has a few monuments of note, such as early rocket prototypes, as well as a small museum. But it lacks many of the striking Socialist Realist statues and mosaics celebrating the Soviet space program that one can see in Moscow, or other formerly Soviet cities. The town feels depressed; the population has shrunk since the 1980s and locals fear what will happen when Russia eventually leaves for good.

Local Kazakhs and Russians use bitter ethnic stereotypes to complain about each other. For now, Russian police hunker down at a police station surrounded by barbed wire. Russia’s Federal Security Service, the FSB, controls access to the town.

Most of the noteworthy sites are at the cosmodrome, a stretch of flat desert larger than Delaware.

“I understand there may be security reasons for not letting us into the launch, but it’s a pity the main museum is within the cosmodrome, and thus off limits,” said Susan Doig. Another visitor complained that exhibits are marked only in Russian.

Tour Service manager Nonna Pampushnaya says her company accommodates 400 to 500 tourists per year, about 50 percent of them foreigners, but admits numbers have been dropping as Roscosmos has tightened restrictions since getting a new director last year.

It is not only tourists who have trouble accessing the liftoff site. A NASA official complained that Roscosmos recently prohibited the American space agency, which pays over $76 million for each seat on the Soyuz rockets, to host a group of journalists. (Reporters at the September 26 launch were accredited with Roscosmos).

Nevertheless, Kazakh tourism officials are keen to capitalize on Baikonur, regularly trumpeting the cosmodrome as a must-see destination for visitors. In 2009, President Nursultan Nazarbayev even pitched Baikonur during a speech at the UN World Tourism Organization’s general assembly.

Last December, the Tourism Committee at Kazakhstan’s Ministry of Industry and New Technologies announced that a company named Diamond Trans had spent $1 million to begin a tourism complex that would include “office buildings, hotels and shopping malls.” Kazakh media reported the project’s overall price tag would reach $140 million.

Yet it is unclear where Diamond Trans broke ground, if at all. Phone numbers listed for the company go unanswered. The Kazakh space agency, Kazcosmos, could not provide contact details and a Roscosmos representative based in Baikonur had never heard of the company (sometimes referred to as Diamond Technology or Diamond Group). The air of secrecy is so thick that the Tourism Committee refuses even to share numbers on visitors to Baikonur.

In any case, Astana has little control over Baikonur, which is leased to Russia until 2050.

Kazcosmos deputy director Erkin Shaimagambetov said he would like to see Baikonur developed like the Kennedy Space Center in Florida. But while he says Baikonur needs more hotel rooms, he complains that “it is impossible for an average person to visit” because of the restrictions Russia imposes.

The site is also purposely remote, built at the height of the Cold War to be far from prying eyes and from communities that could suffer fallout from the occasional rocket disaster.

Direct flights from Moscow are difficult to book (and on aging planes whose airworthiness would unlikely receive an honest safety inspector’s stamp of approval); visitors arriving by train must face Kazakhstan’s notoriously crooked cops.

From Kyzylorda, the nearest Kazakh town with an airport, it is a three-to five-hour train ride to Baikonur. Traveling alone, a EurasiaNet.org correspondent found himself harassed by aggressive police as he was boarding trains to and from the city.

For visitors who do make the trek, hardy Soviet technology will offer some logistical certainties: unlike launches of the now-retired Space Shuttle, the Soyuz is rarely delayed. “The Soyuz rocket is very robust,” the NASA official said, describing how he once attended a blastoff during a blizzard with zero visibility. “Unless the sun is exploding, they’re going to launch.”