Bloggers are to get the largest piece of the pie as authorities pin hopes on "digital influencers." 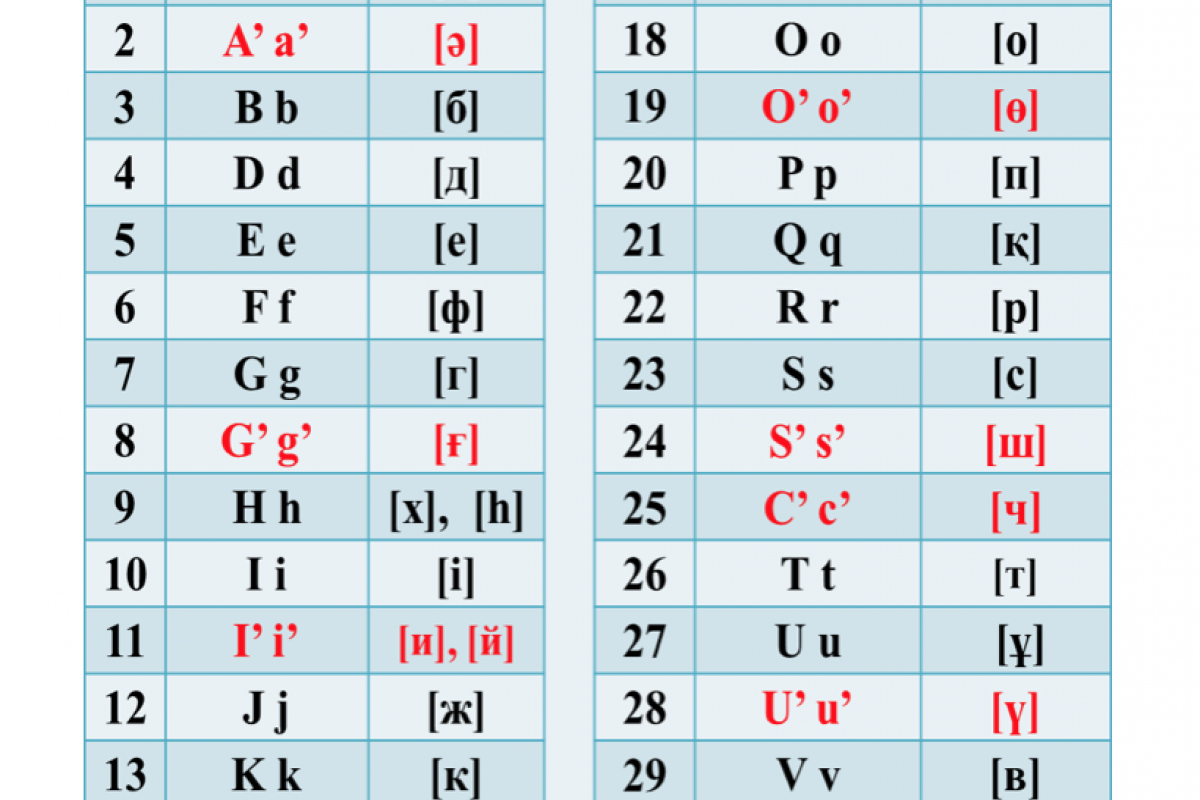 A table showing the new Kazakh alphabet, as published on the presidential website. (Photo: Screenshot of Akorda presidential administration website)

It is probably safe to say most people in Kazakhstan are decidedly cool on the new Latin alphabet devised by the authorities, so the government is now planning to spend big on popularizing the script.

President Nursultan Nazarbayev got the ball rolling in May, when he announced that Kazakh would transition away from the Cyrillic script now in use and fully adopt a Latin alphabet by 2025. By October, after a couple of cursory consultation rounds, Nazarbayev signed off on a 32-character version that has become object of widespread derision.

The problem almost universally cited is the intense reliance on apostrophes to denote vowels and consonants specific to Kazakh — a solution that results in even the simplest of words being peppered with visually unappealing punctuation. What has irked many linguists is that this proposed alphabet was hastily adopted without any proper national discussion.

Nevertheless, the government intends to splash out on an “information campaign” — mainly concentrated at internet users — to popularize the advantages of this new type of writing.

A big piece of pie will be handed out to so-called digital influencers. An exercise described as “explanatory work in social media through the engagement of bloggers” has been granted a budget of over 460 million tenge ($1.4 million). Media experts are taken aback by the size of that sum. The cynics among them have suggested that a large portion might end up in the pockets of pet bloggers, relatives of officials and so on.

While bloggers are to get generous funding, there is no budget envisioned for traditional media. The likelihood is that journalists at those outlets will simply perform the task as part of the permanent “state order” system of subsidies provided by the government to friendly newspapers and broadcasters.

A smaller amount is also being set aside for creating audiovisual content — 168 million tenge ($500,000). The cost of organizing seminars, lectures and courses for the wider population has been set at 427 million tenge ($1.3 million).

The process of actually converting paperwork at state bodies into Latin will start in 2024. But it hardly takes an expert to realize that the switchover will in real terms likely take several years longer than officially envisioned. The fortunes of the Kazakh language itself are a vivid illustration how slow these processes work. Even after 26 years of independence, the bulk of communication within state entities is carried on in Russian, although Kazakh is formally the country’s primary official language.