Qaznews24 had gained 5,000 followers before being deleted. 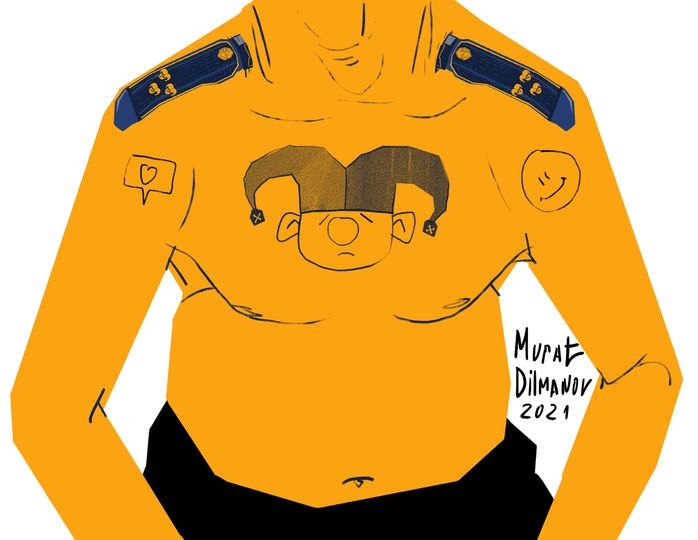 "A satirist's place is in prison": A cartoon by Almaty-based artist Murat Dilmanov.

An Instagrammer in Kazakhstan who amused his followers with Onion-style spoof news items is being investigated by police for disseminating false information.

Police in Almaty said on May 15 that Temirlan Yensebek, 25, the creator of the Qaznews24 account, had been questioned for “misinforming the public.”

Although the parody news produced by Qaznews24 was patently implausible, the ways in which it uncomfortably highlighted the yawning chasm between state rhetoric and reality appears to have irked authorities.

Some notable headlines include “Criminal sanctions for wrongdoings by members of parliament to be handed out to their voters,” “Members of parliament revote law on compulsory declaration of income,” and “Nominal wages in Kazakhstan in 2021 reach 683,432 tenge ($1,600), says National Bureau of Statistics.”

The flavor of the humor requires a feeling for local realities to appreciate fully. The joke in the last of those three headlines is that this figure is so unrealistic, despite being relatively modest by what one might expect of an oil-rich nation, as to be obviously and absurdly false. Not just that, but many suspect the actual figure offered annually by the National Bureau of Statistics is also probably an overestimate.

The parodic quality of the Qaznews24 account, which had garnered more than 5,000 followers before being deleted, was not enough to save it.

“Despite the absurdity of the posts, users actively reposted them, sent fake news to one another through messengers, made screenshots and duplicated them on other information resources,” the police said in their statement.

Meanwhile, news website Vlast has suggested the authorities may have had more specific motivations for acting. The outlet cited correspondence between Yensebek’s wife and her friends as suggesting the most incriminating post was one poking fun at former President Nursultan Nazarbayev.

On May 15, police searched Yensebek’s home and seized two mobile devices and a laptop. His interrogation lasted for several hours. Once he was allowed out after questioning, Yensebek said he was not permitted to talk about his case because he had consented to a non-disclosure of information agreement.

“It was stated plainly on my [Instagram] page that any similarities [between posts and] real people and events are an absolute coincidence. That this was not real news, but satirical content,” Yensebek said.

He said that he deleted the account after receiving threats from persons unknown.

Independent outfits like Vlast and Factcheck.kz have come out in support Yensebek, publishing an open appeal to the Interior Ministry under the title “Satire is not a crime.”

“All over the world, satire and criticism, including that directed at top officials, is considered the norm. Indeed, it is a sign of the development of a society and the extent to which observance of freedom of expression is respected,” the letter states.

The appeal also alludes to a rich Kazakh tradition of improvised folk poetry, known as Aytys, which can often manifest in mocking and satirical verses.

Murat Dilmanov, a cartoonist, told Eurasianet that he believes Yensebek is being targeted under a well-worn method used by authorities to silence its critics.

“Anyone who crosses the red line will sooner or later be intimidated and gagged,” Dilmanov said. “You can joke, but only in ways permitted by the authorities.”