Kazakh activists are outraged at how their government kowtows to Beijing. 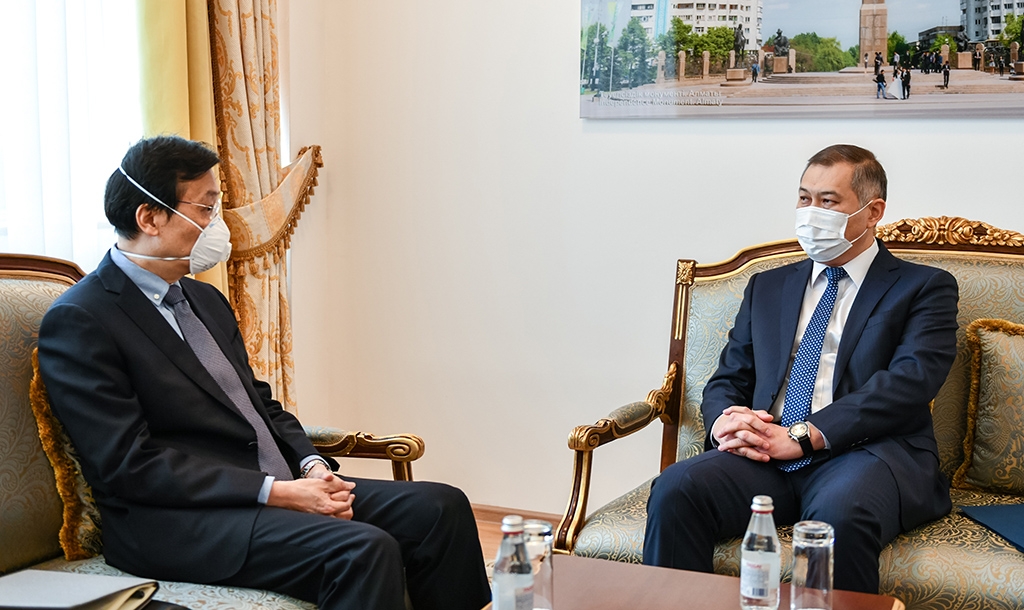 Suspicions about an increasingly assertive China show little sign of flagging in Kazakhstan. But authorities are still intent on demonstrating fealty to Beijing by thwarting grassroots activism critical of the Chinese government.

Serik Azhibai is the latest object of that harassment. On August 3, Azhibai was arrested by police after holding a one-man picket outside China’s consulate in Almaty. The purpose of the demonstration was to demand the expulsion of Beijing’s ambassador, Zhang Xiao, who has provoked ill-will among citizens and officials alike with remarks perceived as disrespecting Kazakhs and their nation’s sovereignty.

Zhang, who has been on the job since 2018, has focused some of his public diplomacies on mounting testy defenses of his government’s policies in China’s Xinjiang province. Hundreds of thousands of minority Muslims, including many ethnic Kazakhs with relatives in Kazakhstan, are believed to have been placed in internment camps there.

More recently, it is the Chinese mission’s observations on the coronavirus outbreak in Kazakhstan that have provoked discomfiture. By alluding in one statement to an unidentified strain of “Kazakhstan pneumonia,” which briefly sparked global panic about the appearance of a deadly new virus in Central Asia, the embassy appeared to be unsubtly pressing Nur-Sultan into changing its protocol for recording COVID-19 cases.

The final straw for Azhibai was when Zhang talked about how Kazakh-Chinese cooperation in security would help Kazakhstan ward off the threat of internal unrest. The ambassador alluded in his remarks to “color revolutions,” a term that officials in places like Beijing and Moscow regularly deploy to demonize shows of mass discontent by citizens ruled by repressive governments.

“We are not an autonomous region of China,” Azhibai complained during his protest. “We are a sovereign state. We have the right to determine our own internal affairs.”

Azhibai is a regular fixture at protest demos, having earlier attended pickets in solidarity with ethnic Kazakhs who managed to flee China. For him, the ambassador’s comments constituted intolerable meddling.

It did not take long for the police to bring a close to his stand. And it was indicative of the mindset of law enforcement officers that they instantly suspected that Azhibai was not moved to organize his picket out of personal conviction.

RFE/RL's Kazakh Service, Radio Azattyq, reported that the police sought to argue in a court hearing on the same day that the activist had been recruited by others.

The judge did not buy the argument but still ruled that the one-man picket violated rules on public assemblies. Azhibai was reportedly sentenced to 15 days in prison.

The person that police evidently suspects of masterminding Azhibai’s actions is a man who has drawn the bitter enmity of the Kazakh government for his vocal and effective activism on Xinjiang: Serikzhan Bilash. His Almaty-based Atajurt group has not only scrupulously collated the information of people believed to have disappeared into Chinese internment camps, but it has also been unusually effective in spreading testimonies about that repression through major Western media outlets.

Nur-Sultan was long at a loss to know how to handle Bilash. On the one hand, they had to consider the sensibilities of citizens enraged by the treatment of their kinfolk in Xinjiang. But then there was Beijing’s attitude to consider too. China is a vital economic partner and was clearly irked by the activism of Bilash and his ilk.

The first warning shots were relatively trivial. In February 2019, Bilash was fined around $700 for operating Atajurt without registration. He laughed that off and continued as before.

It got a bit more serious some months later when Bilash was arrested on extremism charges based on a highly fanciful interpretation of some of his remarks. The same energy that fuels Bilash’s doggedness also manifests in his voluble, bombastic demeanor. At times, he resorts to the kind of highly colorful demagoguery that prosecutors seize upon with glee. Allegedly extremist language is a common expedient in Kazakhstan for the arbitrary jailing of government critics.

In the end, Bilash squirreled out of trouble by means of a plea bargain. After the case was concluded, he formally distanced himself from Atajurt.

The backstory to that entity spotlights another strand of the government’s strategy to squash Xinjiang activism. Although the original Atajurt was repeatedly denied registration by the Justice Ministry, the authorities demurred when they received an application from a splinter group called Atajurt Volunteers. This new organization was run by disaffected Bilash associates and has made no real efforts to promote the Xinjiang cause – the original Atajurt’s entire raison d'être.

This detail has lent weight to suspicions that Atajurt Volunteers is, in fact, a covert catspaw operation. As has the decision by Atajurt Volunteers to report Nagiz Atajurt to the authorities for operating without registration, culminating in another trial featuring Bilash, Maksutkhanuly, and a handful of others. The case is expected to begin imminently.

The harassment of Bilash and his crew is clearly not all about China. The idea that Xinjiang activism and opposition politicking could converge – or maybe already have done so – is something that provokes palpable disquiet in Nur-Sultan.

“I tell them that I am not doing, and have no plans to do, anything against the government,” Bilash told Eurasianet, speaking in English, in a telephone interview. “They never seem to believe me.”

The xenophobic sentiment is never far from the surface in Kazakhstan and has often proven a reliable tool for rousing public outcries.

Some of the largest demonstrations of recent years took place in the spring of 2016 when thousands of people got involved in rowdy protests against purported plans by the government to sell large swathes of land to Chinese investors. The fact that there is no known evidence any such plans existed was of little importance.

There was more angry grumbling in 2019 when talk spread through the grapevine about Chinese companies supposedly being on the cusp of building dozens of polluting factories across Kazakhstan.

What may also trouble Nur-Sultan is that some activists look ever more unmoved by the legal consequences of taking a stand on Chinese repression in Xinjiang.

Baibolat Kunbolat, who filmed Azhibai’s Chinese consulate protest, has more than once picketed the same building to demand the release of his brother, Baimurat Nauryzbek, who was sentenced to 10 years in jail in 2018 over a forum post that he wrote in 2012.

Earlier this year, representatives from Almaty city hall warned Kunbolat that he could be arrested if the unsanctioned protest happened again.

But the 39-year-old is undeterred. And neither is he cowed by the intimidation he got from a Chinese consulate employee, who warned him darkly in a messaging app exchange not to become “a pawn of anti-China forces.”

“Of course, I will ask for permission to protest. But if they refuse, I will protest anyway and sit in jail for 15 days,” Kunbolat told Eurasianet. “I need to get my cousin out.”