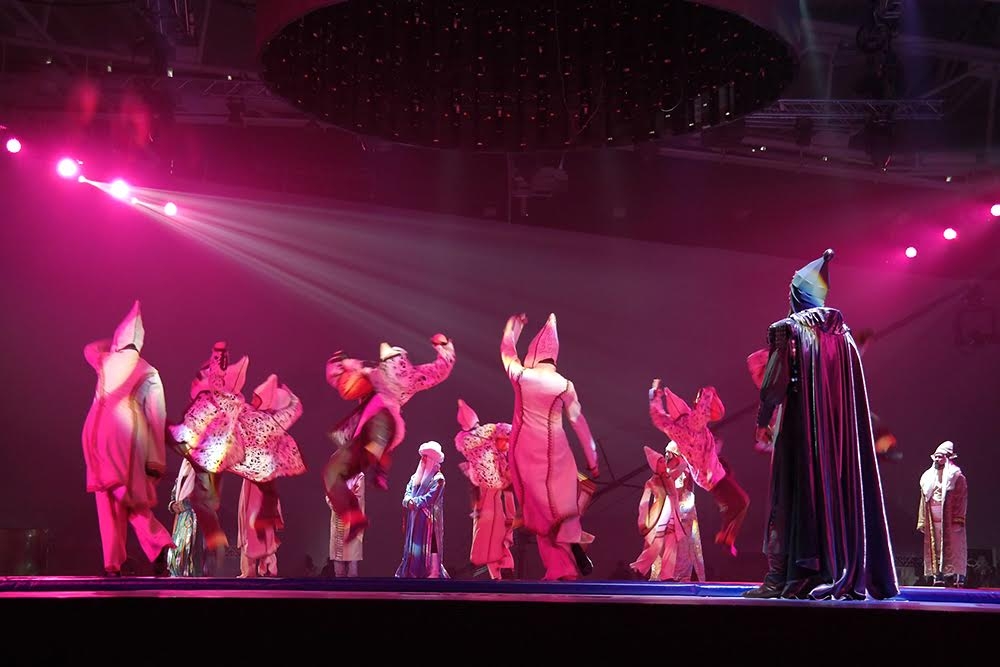 Dancers perform during the two-day festival in Taraz – touted by Astana as the cradle of Kazakh statehood. (Photo: Paul Bartlett)

Kazakhstan held poetry jamborees, horse races, musical performances, wrestling competitions and even a marathon push-ups session to mark the 550th anniversary of the creation of a Kazakh khanate, as authorities fired up patriotic pride.

The celebration of Kazakh heritage was widely seen as a response to the 2014 comments made by Russian President Vladimir Putin in which he seemed to question the nation’s legitimacy. The events wrapped up in early October with two days of partying in Taraz, the usually sleepy southern town now touted by Astana as the cradle of Kazakh statehood. Taraz pulled out all the stops in celebrating the foundation of the first Kazakh khanate in 1465 by the khans Kerey and Zhanibek, staging a slew of traditional sporting and cultural festivities that ranged from horse races to musical poetry competitions and wrestling.

The culmination came with the opening of a new monument to the two khans, whose celebrated founding exploit occurred in a valley near Taraz – an event that amply preceded the reversal of Mongol dominance in territories that would come to form modern-day Russia.

Attempts to cultivate reverence and pride appear to have been successful in Taraz.

“[Statehood] was a historic dream for Kazakhstan, an ancient dream that has come true after 550 years,” said Gulnaz Aydinbayeva, a 45-year-old healthcare worker out taking her first look at the new monument to Kerey and Zhanibek, one day after it was unveiled by President Nursultan Nazarbayev.

“We bow before the president,” Aydinbayeva said, genuflecting to emphasize her point.

In a speech delivered in Taraz, Nazarbayev stressed the antiquity of the date being remembered. “The 550th anniversary of the Kazakh khanate shows that the Kazakh nation and the Kazakh state have a long history,” Nazarbayev said as he unveiled the statue on October 8. “We are showing the world our great history.”

Some critics have criticized the date selected as historically dubious, but Nazarbayev defended it when he announced the plans for the celebrations a year ago.

“The statehood of the Kazakhs dates to those times,” he said. “It may not have been a state in the modern understanding of this term, in the current borders… [But] it is important that the foundation was laid then, and we are the people continuing the great deeds of our ancestors.”

The khanate, which only ever existed as a loose unifying entity, dissolved by the late 16th century, and the institution of the khan was abolished by Russian rulers in 1824.

The resurgence in interest in this passage of history was apparently reinvigorated after Putin questioned the durability of Kazakhstan as a nation state. Putin suggested that Kazakhstan may struggle to withstand the departure of its founding father, 75-year-old Nazarbayev, when the time eventually comes.

Astana did not react directly to Putin’s comments, but the dismissive remarks from an ostensibly close ally caused widespread outrage among many Kazakhs.

Putin’s faux pas came as the Kremlin-instigated conflict in Ukraine was in full swing and while nationalist politicians in Moscow like Vladimir Zhirinovsky were voicing belligerent territorial claims against northern Kazakhstan.

Astana has not publicly linked the statehood celebrations to the Russian leader’s remarks, but many in Kazakhstan were quick to perceive the connection.

Performers taking part in an aytys musical poetry competition in Almaty in September as part of the statehood festivities did not shy from mentioning it. “The leader of a neighboring country said last year that Kazakhs in the past did not have a state,” sang akyn poet Maksat Akanov. “We have answered him, not with words but with deeds, and now we’re getting ready to celebrate.”

To rapturous applause and loud cheers from the thousands-strong audience packed into Almaty’s Palace of the Republic, he issued a metaphorical rallying cry to “bring your sword and slay those who still call Almaty Verny [its colonial name in the Russian Empire], and destroy Zhirinovsky as [14th-century conqueror] Tamerlane destroyed Moscow.”

Other poets sang heartfelt couplets calling for a main Almaty thoroughfare that still bears its Soviet-era name Furmanov, a Russian writer and Bolshevik commissar, to be changed to honor Kerey and Zhanibek. Many streets in Almaty were officially renamed in the post-Soviet period, but it has long been rumored Furmanov has been left as it is so it can one day bear Nazarbayev’s name.

Plays, operas and ballets were staged around the country to celebrate the anniversary. Television broadcasters got into the spirit of things with documentaries, historical dramas and cartoons about the first Kazakh khanate. In Astana, one nine-year-old boy marked the occasion by doing an exhausting set of 550 push-ups.

In Taraz last week, crowds in the holiday mood thronged the moment to Kerey and Zhanibek to take selfies with the khans. Later, people headed to the First President’s Park to enjoy concerts and displays of Kazakh arts and crafts and musical instruments in the yurts erected for the occasion.

The city staged traditional bayga horse races at its hippodrome, and wrestlers competed in the international Eurasia Barysy (Eurasia Snow Leopard) competition at the Taraz-Arena stadium. That contest opened with a flamboyant dance show which culminated with the face of Nazarbayev appearing on a giant screen, superimposed on a map of Kazakhstan in the national colors of blue and yellow – a reminder that the father of the nation was watching over the country’s statehood celebrations.

During the festivities, which kicked off with fanfare in Astana on September 11, the administration has been driving home the message that Kazakhstan’s statehood has ancient roots, but that the people have Nazarbayev, modern Kazakhstan’s first and hitherto only president, to thank for its present-day incarnation.

Many of the townspeople out celebrating on a bright sunny day in Taraz got the message loud and clear. “This dream of independence came true thanks to our president,” said 80-year-old Nakan Aydinbayeva, staring up at the giant figures of Kerey and Zhanibek seated between a tall white column.