The minister was eager to stress that men who wear beards for reasons of style need not worry; they do not fall into a "group at risk." 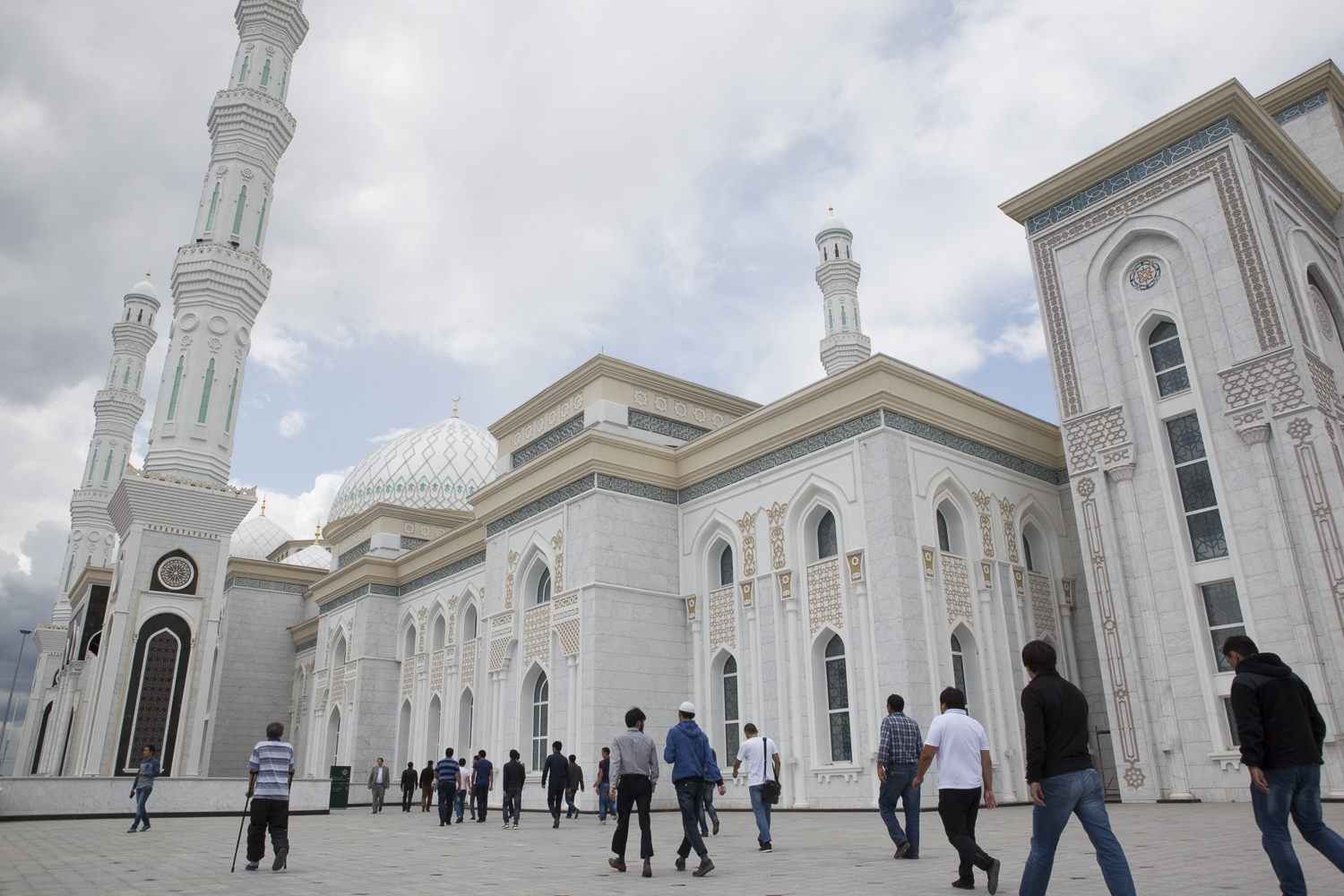 A good Muslim should look the part – legislation now being pushed by Kazakhstan’s government essentially boils down to that simple precept.

Followers of ultra-orthodox currents of Islam are incensed by the plans to strictly regulate the minutiae of their daily life, down to what they wear and talk about, calling the proposed rules a violation of their basic freedoms.

“To be a believer has become dangerous in Kazakhstan. I feel I am breaking the law just by adhering to my religious principles,” Sanat, who moved to Almaty for work from the western city of Aktau, told Eurasianet. Sanat, who asked his full name not be published out of concern he could be targeted by the authorities, proudly identifies as a Salafi, a strict sect that advocates for a return to the way Islam was practiced by the Prophet Muhammad’s contemporaries.

Details of the draft legislation on religious activities began to raise eyebrows as soon as they were made public by the Ministry for Religious and Public Affairs midway through 2017.

Among the more contentious points is a proposed ban on people wearing clothing that covers the face while in public. This is a clear reference to niqabs and similar forms of female dress. Speaking to reporters after lodging the bill with parliament last month, Religious Affairs Minister Nurlan Yermekbayev broadened the scope of the law yet further.

“Among the external attributes of destructive religious currents, we could include things that are characteristic for radical currents in Islam. For example, preaching intolerance, clothes that cover your face, certain types of beards and short trousers,” Yermekbayev said, alluding to attributes commonly deemed to be the preserve of especially pious Muslims.

Yermekbayev said police may initially just issue verbal warnings, but that if this proves insufficient, offenders could face fines of $370 for first-time breaches and up to $740 for repeat offenses. The minister was eager to stress, however, that men who only wear beards for reasons of style need not worry as they do not fall into a “group at risk.”

Sanat described talk of prohibiting beards as an unacceptable invasion of personal liberties.

“Is this not my own personal business, whether I want to grow out my beard or shave it off? This is a violation of my constitutional rights. My government wants to demean me, and I do not intend to put up with this,” he said. “I am already looking into applying for asylum in England or the Czech Republic because of the violation of my religious freedoms in my country.”

As to tolerance, Sanat argued that it is devout Muslims who must put up most often with intransigent positions, not the other way around.

“Yes, it is true that we believe our ideology is right and we reject any other ideology. But I don’t get people who say, ‘Don’t interfere in my personal affairs,’ but then think it is fine to do the same thing themselves,” he said.

Another provision is to tighten rules on obtaining a religious education overseas. Ever-growing numbers of young Kazakhstanis have been setting off for the Middle East for that purpose. Officials worry that while abroad, away from their families and in an alien environment, many of them are falling prey to radicalization. Under the new rules, it may also become illegal to perform religious rites anywhere other than places of worship. For Muslims, ceremonies to seal or even annul nuptials will only take place in the mosque – as opposed to people’s homes, which is now commonplace. A matter of particular concern to proponents of the law is that women married informally are often under 18 years old – below the age at which it is legal to marry.

According to government research, only around 15 percent of Kazakhstan’s citizens, who also include many Christians, pray regularly. The Spiritual Administration of Muslims of Kazakhstan, the state-affiliated body that claims supreme religious authority in the country, espouses the Hanafi school of Sunni Islam. In practice, this state-sanctioned Islam often cross-fertilizes core theological tenets with specifically national customs.

Salafis bridle at such compromises and accretions, decrying them as a corruption of the true spirit of Islam as embodied in the Koran.

“During Kazakh national holidays, it is the custom to pray to the aruaq, the spirits of the departed. But we do not practice these rituals, because we recognize and pray to only one Allah,” Sanat told Eurasianet.

Quite how many believers take such dissenting positions in Kazakhstan is pure guesswork – some wholly unscientific estimates put the number around 20,000 people.

The impulse to increase control over religion gained fresh energy in the wake of violent events in June 2016 in Aktobe. A group of more than 20 men in the western Kazakhstan city attacked two hunting-supplies stores, grabbing shotguns that they then used to mount a doomed assault on a military garrison. Seven people were killed and dozens injured in the unrest.

President Nursultan Nazarbayev dubbed the attackers Salafis and claimed that they had received their orders from abroad. He then instructed officials to tighten legislation and control over “non-traditional religious groups.”

The responses have generally been ad hoc and unstructured.

In some cases, authorities applied pressure to schoolchildren. When the subsequent academic year began, reports emerged of schools preventing girls in hijabs from attending classes. Outraged parents complained that their religious freedoms were being flouted.

Elsewhere, the emphasis has been put on outreach programs to bring people back into the fold of officially sanctioned Islam. Officials in the Aktobe region, where the Salafi current is said to have the deepest roots, announced this week that their “theological work” had successfully converted 400 people in 2017.

“We set up an expert council of 15 strong theologians and psychologists who analyze the religious situation in the region every month,” the head of the Aktobe regional government’s religious affairs department, Zholdas Kalmaganbetov, said on February 14. “In 2017, they held around 1,500 one-on-one meetings and conversations with representatives of target groups.”

Supporters of the legislation under review believe it would help maintain public order. Amanjol Urazbayev, head of Counterterrorism Committee, a nongovernmental group, told Eurasianet that official thinking behind imposing bans is to avoid “sowing confusion in the minds of respectable believers and to protect them from the influence of destructive currents.”

“Faith should be in people’s hearts, not in their exterior attributes. About 80 percent of those people who openly demonstrate their religious convictions have a very superficial understanding of Islam. But for all that, they are intolerant to alternative viewpoints and beliefs. This is a hidden protest potential that represents a threat to society,” Urazbayev said.

Some experts take a divergent view, expressing concern that pressure from above could produce a counterproductive effect, inciting dissenting moods rather than dampening them.

“Religion is an area of life with its own specificities and any incorrect dealings with it can lead to undesirable outcomes,” Asylbek Izbairov, a professor of religious studies at the Eurasian National University, wrote recently for the website of Moscow-based geopolitics think tank Information-Analytical Center.

A broader approach to the issue proposed by yet others is that the government consider religion in the broader context of material wellbeing. Yulia Denisenko, director of the Astana-based Association of Centers for Religious Studies, said that the best way to combat what officials call “destructive trends” is not to adopt hardline measures but by developing the nation’s economy.

“A strong economy is the government’s trump card. If people live in prosperity, no destructive ideas about so-called justice can take root,” Denisenko told Eurasianet.