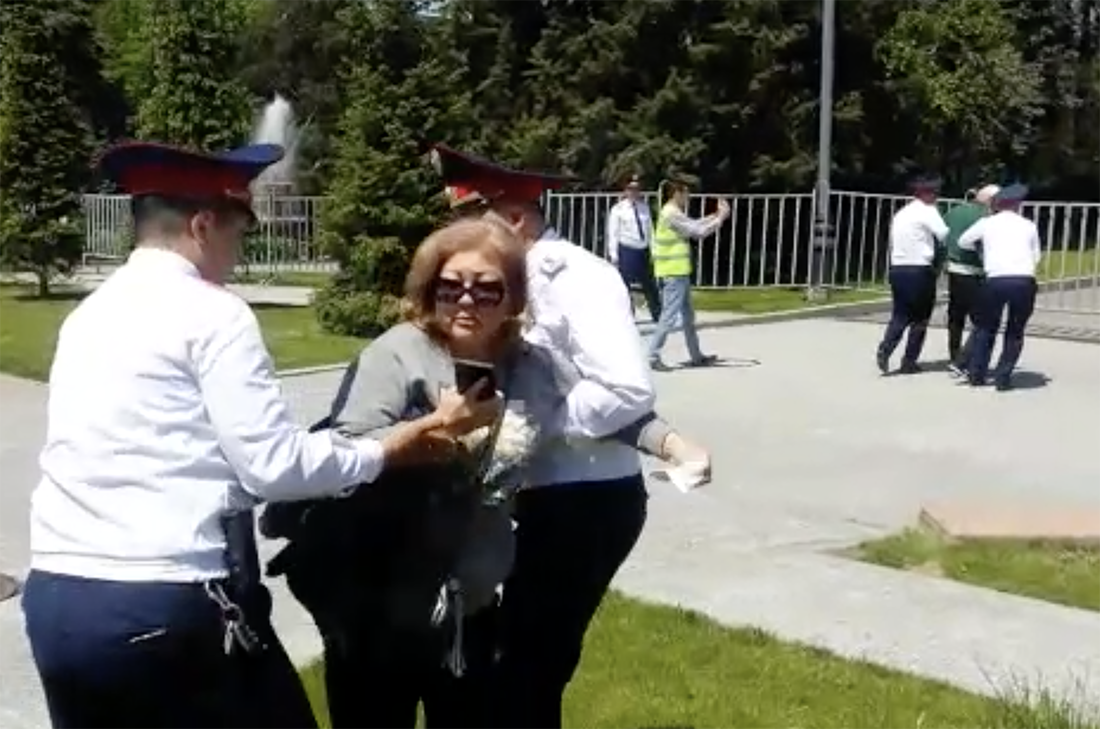 A woman is detained on May 9 in Almaty (Eurasianet)

Kazakh police were well-prepared on May 9, detaining protestors in some cases before they could even leave their homes.

Multiple social media platforms and independent news sites were unavailable for much of the day, a major public holiday across the former Soviet Union that marks the defeat of Nazi Germany. The website of the Kazakhstan Bureau of Human Rights and Rule of Law also appeared to be blocked.

The few protestors who turned out in an Almaty park were quickly arrested. Journalists were harassed; men with umbrellas, for example, prevented a RFE/RL reporter from filming.

Arrests were made across the country. According to a tally by Aina Shormanbayeva, president of the International Legal Initiative, a human rights NGO, nine people were arrested in Almaty and three in Nur-Sultan, the capital. In addition, she reported arrests in Aktau, Aktobe, Atyrau and Uralsk.

The mood for protest in Kazakhstan has swelled since interim President Kassym-Jomart Tokayev took power in March from veteran strongman Nursultan Nazarbayev, when he resigned suddenly. Nazarbayev, who ran Kazakhstan for almost 30 years, still wields immense power, however.

In what looks like a carefully stage-managed transition, Tokayev then planned snap elections next month. Kazakhstan has never held an election deemed free and fair by credible observers; there is little reason to expect the vote on June 9 will be any different. In 2015, Nazarbayev took almost 98 percent of the ballots.

The May 9 rallies were ostensibly called by fugitive former banker Mukhtar Ablyazov, a regime foe who has lived in Europe for years. But it is unclear how much sway the exiled rabble-rouser can muster. Many protestors say they are simply angry that they are not being consulted in such a crucial national decision.

While police officers in Almaty were making door-to-door enquiries to record residents’ personal information – including their place of work, job titles and mobile phone numbers – busloads of riot police sat in central squares and parks, preparing to nab any plucky protestors.

Daniyar Moldabekov, a reporter for the independent online magazine Vlast.kz, was detained in the morning and taken to a police station. He was released an hour later.

Most of Kazakhstan’s media chooses not to report on anything remotely critical of the authorities, such as protests. Eurasianet has seen a screenshot of a message, purportedly from the editor of Informburo.kz to his newsroom, which reads: “In the next four days no demonstrations, no arrests, no attempts to undermine the celebration of the joyous holiday allowed on the site!”

But social media is rich with discussion about the presidential transition and the ongoing crackdown. (Politically active Kazakhs on social media often use VPNs to access blocked sites.)

Some people take pictures of themselves holding up blank pieces of paper or even invisible signs to mock police who detained 24-year-old Aslan Sagutdinov in Uralsk earlier in the week for holding a blank sheet of printer paper.

Amirzhan Kosanov, the only opposition candidate allowed to register for the presidential vote next month, expressed his support for a free media and for the protestors.

“Victory Day over [Nazi Germany’s] fascism has turned into Victory Day of the absurd over common sense and the constitutional rights of citizens,” he wrote on his Facebook page.