There is a gaping inconsistency between the president’s promises and how police treat activists. 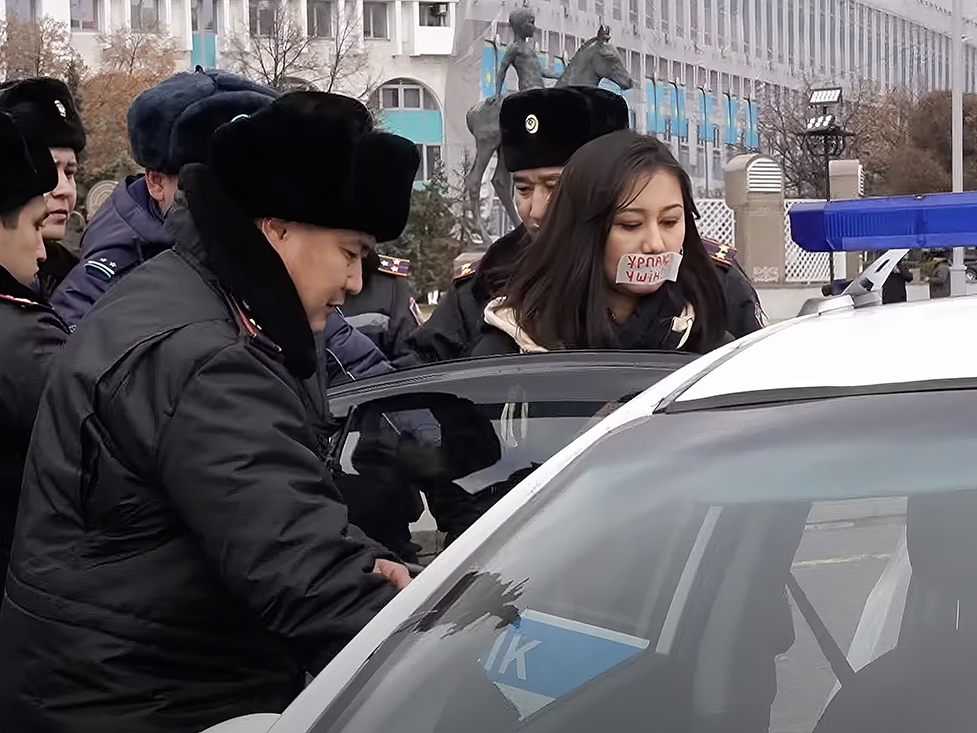 On the day of Kazakhstan’s presidential election over the weekend, a small group of demonstrators assembled in a central Almaty square and unfurled a banner.

The sign read: “Will we live to see fair elections?”

The picketers were calm and small in number, but the police nevertheless quickly swooped in. The banner was snatched away and the handful of protesters bundled into a van.

The scene was strongly at odds with the words of President Kassym-Jomart Tokayev, who recently offered a firm pledge to a gathering of diplomats about the “irreversible nature of Kazakhstan's course towards consistent democratization.”

“Special efforts are being undertaken to increase the role of civil society, to bolster various social forces, to implement the concept of the ‘listening state’,” Tokayev said at the November 3 gathering.

Only one day before the president spoke, a pair of activists in Almaty, 28-year-old Aidana Zhanadilova and 33-year-old Aigerim Tleubayeva, failed in their legal bid to get the city to allow them to mount authorized demonstrations. It is only those kinds of rallies that do not end with participants being stuffed into a police van.

For political campaigners, the inconsistency here is plain on its face.

Zhanadilova and Tleubayeva are becoming well-used to having their rally permits turned down. They have racked up more than 30 refusals to date.

The reason that they are so eager to hold a demonstration is that they are steadfastly opposed to changes to electoral rules adopted in December 2020 that critics have argued limit the scope for independent observers to keep tabs on how votes are being conducted.

One provision of the legislation stipulates that only organizations that specifically include election-observation activities within their founding charter may be authorized to post monitors in polling stations.

Zhanadilova, Tleubayeva and other similarly vocal pro-democracy crusaders are seasoned vote monitors who feel this provision has been designed to shut out people like them. Holding a rally would be one way to draw attention to the problem, they say.

But again and again, Almaty city hall refuses to give them the green light to protest publicly.

In 2020, Tokayev signed off on a law regulating how and where demonstrations may take place in what his proxies described as a “paradigm shift” that would transform the nation’s political culture. Among the most trumpeted provisions of the legislation was one ostensibly requiring organizers of a rally to provide only advance warning of their intentions, rather than requesting permission.

As Zhanadilova and Tleubayeva have found to their dismay, however, the law changed almost nothing. In despair at the Almaty city hall’s constant refusals, they decided to sue.

“We filed lawsuits because we believe that the refusal to hold rallies was illegal and that our right to peaceful assembly was violated,” Zhanadilova told Eurasianet.

What has troubled Tleubayeva most about the failure of their legal campaign is what it says about the justice system, which analysts argue has barely been touched by Tokayev’s reforms.

“I understand that the Kazakh judicial system cannot be independent of the executive, so I did not expect a miracle,” Tleubayeva said. “But I was disappointed with the level of competence of the legal representative for the defendant [the city hall]. […] He did not even try to argue in a logical way and speak convincingly.”

When city hall has refused to give permission for rallies to happen, their justifications have tended to strain credibility. Doing their due diligence, Zhanadilova and Tleubayeva one time went to inspect the three Almaty locations where demonstrations are sometimes allowed to take place – except, it seems, when they are the ones asking.

“One of the locations was supposedly under repair, but all we saw was a twisted hose lying in the middle of the square behind the Sary-Arka cinema. On Valikhanov Square, there was supposed to be a cultural event, be we went there after 6 p.m. on August 20 and there was nobody there. And there was also no cultural event in the Gandhi Park at 4 p.m. In the morning, there were about seven or eight students with an amplifier. Apparently, that was a mass cultural event, according to the city hall,” Zhanadilova said.

Yevgeny Zhovtis, a lawyer and rights campaigner who was involved in the working group assembled to offer insights on the 2020 demonstration law, said at the time that the authorities appeared to be drawing inspiration from unhealthy international models.

“They are using the experience of countries such as Russia or Singapore. But the experience of these countries is not only not the best global practice, but they have also been heavily criticized by the international community,” Zhovtis told RFE/RL’s Kazakhstan service in April 2020, shortly after abandoning the working group in dismay. “Russia has lost cases in the European Court of Human Rights because its legislation on peaceful assemblies, and especially its law enforcement practices, are contrary to the Convention for the Protection of Human Rights and Fundamental Freedoms, which it has ratified.”

Events at the start of this year seem to have intensified the anxieties of the authorities around mass gatherings. A small demonstration in western Kazakhstan over rising fuel prices after New Year quickly escalated into large protests around the country. None was bigger than the one in Almaty. Riot police reacted aggressively, precipitating ugly clashes. Later, a rowdier element stepped into the fray, further escalating the violence. Authorities would go on to claim this was an attempted coup.

Three days before the November 20 election, the National Security Committee, or KNB, issued a statement to claim that a “criminal group” was planning to mount mass riots on the day of the vote in order to finish the work allegedly started in January. The KNB produced a video, complete with a dramatic soundtrack, with images of Molotov cocktails and guns they said were to be used during the planned unrest.

None of the claims in the video statement are possible to verify and whatever trials do take place will, if precedent is a guide, be secretive and perfunctory. Government critics would argue that claims of mysterious plots are merely a pretext to suffocate opposition activism.

At present, it is not only mass rallies that worry the government. Even one-person pickets draw immediate suspicion.

At the end of October, activist Bekbolat Utebayev mounted one such solitary stand in the northern city of Uralsk to demand more political reforms. It was not long before he was approached by two representatives of the local authorities to tell him his actions were in violation of the law.

In the summer, Almaty-based IT engineer and activist Daniyar Supiyev performed a similar feat. In his case it was to complain about the election observation rules. He was detained and fined 153,000 tenge ($330).