Kazakhstan: Struggling for Air in a Suffocating City 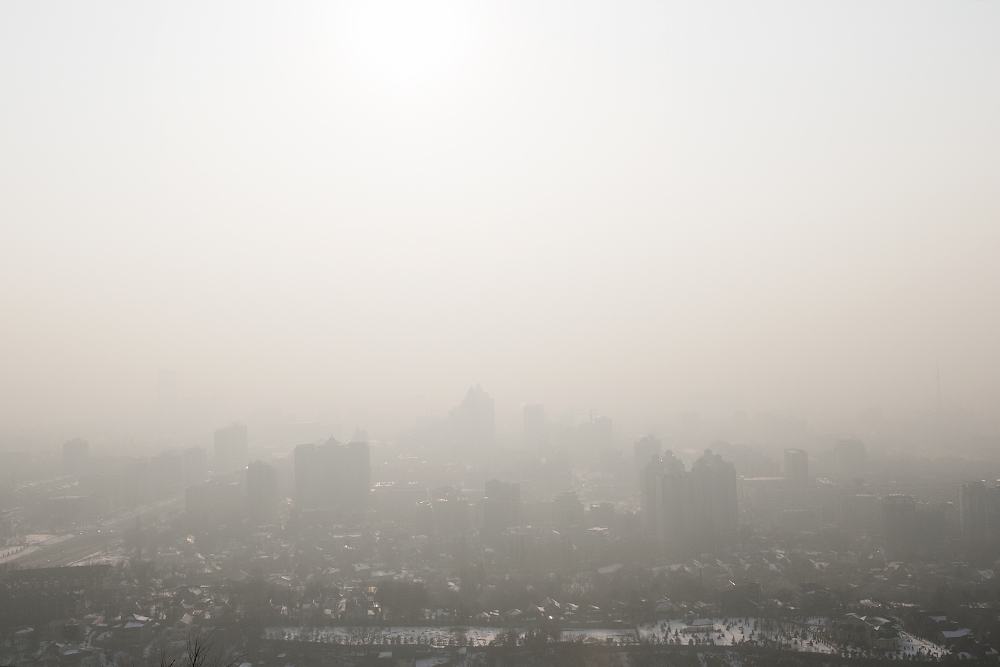 A thick haze of pollution settles over the Almaty skyline in March 2011. (Photo: Dean C.K. Cox)

People in Almaty know their air is filthy, but when a group of activists got together to tell them exactly how bad it was, it did not go down well.

Smog hovering above Kazakhstan’s largest city is now an almost permanent feature that mars otherwise stunning views from the snow-capped mountains to the south. In just a quarter century, haphazard urban planning has led to erosion of the city’s green space, giving way to a proliferation of tall buildings that have disrupted natural ventilation patterns, thus trapping pollution churned out by the ever-growing number of outsized gas-guzzling vehicles that now clog roads.

Just so Almaty residents could understand how serious the problem had become, Asya Tulesova has now dreamt up Almaty Urban Air, or AUA for short, which is also the Kazakh word for “air.”

In August, AUA began monitoring air quality data with a device similar to one used by the state weather service, Kazhydromet. The meter was paid for through a US State Department grant. Tulesova’s team used their instruments to calculate the presence of PM10 particles, specks of material in the air that might be too small to see, but are still potentially deeply harmful.

“The project is new and no one did this before us,” Tulesova told EurasiaNet.org.

Tulesova admits she is not an expert on air pollution, but she has found imaginative ways to raise popular awareness about environmental issues. On one occasion, she set up a mobile cinema that worked off power generated by the pedaling of viewers in the audience.

In November, AUA began making its findings public through its website and mobile applications. The app was a hit and was downloaded by 6,000 people — all of whom must have been shocked by what they learned. The presence of harmful particulates in Almaty’s air exceeded the norm by five to six times at regular hours and became even worse during morning and evening rush hours, when the city’s grid-like roads grind to a virtual standstill.

Three weeks after AUA’s app was launched, authorities stepped in to shut down the operation. Almaty city hall questioned the reliability of the data and demanded that the creators of the AUA app retune their measuring devices to fit government standards.

Tulesova has since told EurasiaNet.org that AUA’s dust meters passed the muster with government officials in Astana, the capital, but that they are still not being allowed to make information public. The reason for this appears to be rooted in legislation that gives Kazhydromet monopoly privileges to publicizing analyses of air quality, Tulesova said.

“We can [assess air pollution] as part of public monitoring, which we are still doing. But we cannot broadcast the data. That can only be done through Kazhydromet,” Tulesova said.

The government’s wariness over the AUA initiative flies in the face of an emerging consensus about the quality of Almaty’s atmosphere.

In April, a group of students organized a photo exhibition titled “All We Need Is Air” that displayed pictures taken by the public showing the different ways in which air pollution was affecting the city. Again, the aim was to open people’s eyes to things they already suspected.

“We found out that Almaty is among the top 10 most polluted cities in the world,” said Ilyas Seitov, one of the organizers. “We decided to show people the truth of this problem, at least in photos.”

AUA team members say they want to cooperate with Kazhydromet, but progress has been slow. “It is proper that government should want us to ensure we are giving out reliable data. But it is also good to have many instruments and see how various information is correlating. Our device can complement that of Kazhydromet, and then the overall picture will be more accurate,” Tulesova said.

More than 80 percent of air pollution in Almaty is caused by the overwhelming amount of traffic — around 250,000 cars and other vehicles move around the city daily. Other miscellaneous sources of harmful emissions include electricity and heating plants and privately owned factories.

Aitkul Khalelov, chief laboratory technician at the Almaty government’s Environment Department, said the quality of gas being pumped into cars is also part of the problem. Low-grade gas, which is becoming more sought after as the economy goes through tough times, means worse emissions.

“The situation with fuel is awful. It is very hard to keep tabs on the gas stations,” Khalelov said.

People living in residential areas not connected to the centralized heating grid fire up their household stoves in the cold winter months. Khalelov said many throw hazardous materials containing rubber and plastic onto the fire, compounding the smog problem in the coldest months of the year.

Then there is the matter of illegal logging. One blogger in Almaty compared satellite shots featured on Google Earth to calculate that an area of 17,000 square meters was stripped of trees in the city from 2013 to 2015. Almaty’s older residents recall fondly how they once picked apples from the countless trees lining the city’s broad avenues, but those and other plants have long since been eradicated in the frenzy of development in the 1990s and 2000s.

Despite the authorities’ apparent resistance to grassroots efforts like the one spearheaded by Tulesova, some officials in Almaty are trying to keep the environment at the top of the agenda.

The city government has invested heavily in natural gas-powered buses, which should lighten the public transportation system’s carbon footprint. The creation of dedicated bus lanes along one of Almaty’s busiest thoroughfares, Abay Avenue, has persuaded some drivers to trade their cars for public transport.

Mayor Baurzhan Baybek has joined in efforts to popularize the use of bicycles as a means of commuting. The bike lane network has been extended to around 30 kilometers, although the route has at times proven to be impractical in its layout.

City authorities have also prohibited the construction of buildings taller than three stories in the foothills of southern Almaty, which should guarantee some wind circulation from the mountains.

The stakes are high and not just to do with embellishing Almaty — not to speak of other pollution-afflicted cities in Kazakhstan — but rather with extending life expectancy.

Improvements may be imminent, although as a conclusion to a 2013 article in the Journal of Environmental Protection has noted, Kazakhstan is starting from a worryingly low standard: “In relative terms, the impact of air pollution on premature mortality in Kazakhstan is notably higher than in Russia and the Ukraine.”