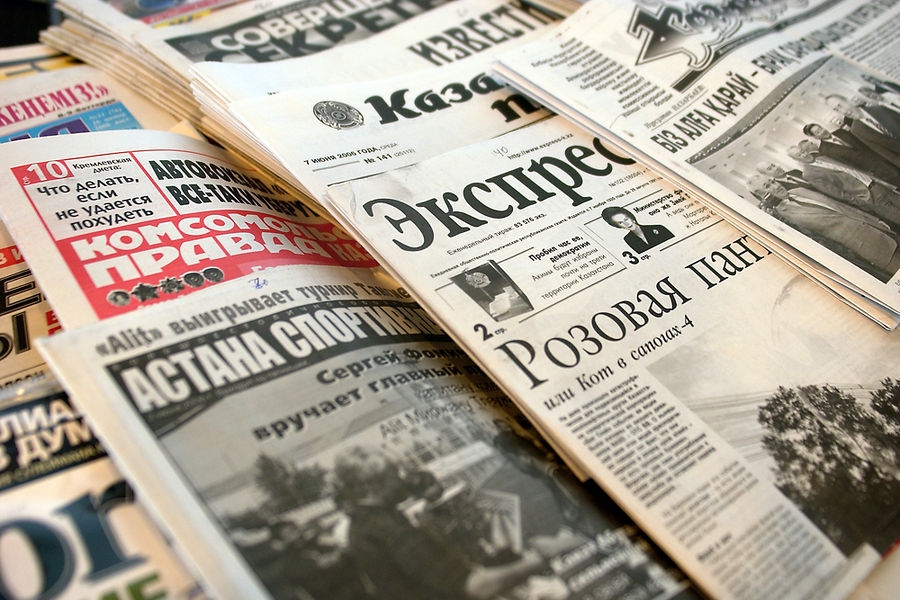 The government of Kazakhstan maintains a system of state subsidies for mass media, under which authorities pay outlets to cover selected topics in a particular way. These subsidies keep many struggling outlets afloat in a challenging operating environment. But they also distort coverage and hinder the development of healthy competition.

Under the system known as the “state order,” media outlets publish or broadcast material on certain topics that are selected by officials, who want such content to shape public opinion in ways that cast the government in a favorable light. In return, the participating outlets receive state funds.

The Ministry of Culture and Sport is responsible for placing material in the national media via the state order, while local executive authorities allocate funds to regional media outlets. There are currently about 3,000 media outlets of all sizes operating in Kazakhstan, and 95 percent of them receive government subsidies through the state order. For many outlets, these subsidies are a critical source of income.

In 2012, a non-governmental organization called the Legal Media Center, using a grant from the Soros Foundation-Kazakhstan, developed a database of recipients of media subsidies via the state order. This is the only publicly accessible resource in which information can be found about the use of public funds as part of the government’s media policy in Kazakhstan. The database (http://lmc.kz/baza.html) contains data on media subsidies allocated since 2008, and includes information on outlets arranged by type of media and information on tenders. It is updated every year.

"We wanted to understand whether or not the existing system contributes to the development of the media market; how well budget funds are spent; and how the projects that are implemented are monitored and assessed. The answers to these and to other questions have been disappointing," says Diana Okremova, the director of the Legal Media Center.

Okremova believes the state order has encouraged a culture of dependency – both financially and editorially – among media outlets in Kazakhstan. Such conditions discourage innovation, and thus make it more difficult for news organizations to build sustainable operating models.

"Ultimately, the media are dependent on the state, not only in terms of finances but also ideologically. This is contrary to the standards of professional journalism," says Okremova.

The government is not solely responsible for the current situation. Many outlets that accept state funds are a part of the problem.

Transparency, or the lack thereof, is a major issue for many outlets. By law, all recipients of state order funds are required to disclose information about this on their respective websites. Yet during the process of building the database, activists with the Legal Media Center found that not all outlets complied with the requirement.

As a result of non-compliance, information concerning state-order subsidies often had to be uncovered using a variety of means. In addition, there is unfortunately no uniform standard for the publication of budget information: not all state agencies publish data on the allocation of funds, and many refer readers to the government procurement website—where it is often difficult to locate sought-after data.

Some 42 billion tenge (about $126.8 million USD) is allocated every year from the treasury for media subsidies. The level of financing reached a peak in 2015, and there has been no significant reduction for 2016, despite a severe economic downturn in Kazakhstan. Of the funds allocated as media subsidies, 90 percent is distributed as direct financing to selected outlets and the remaining 10 percent is allotted through competitive tenders.

To understand exactly how budget funds are spent, representatives of the Legal Media Center analyzed the titles of the tenders. They mainly focus on covering government activities; promoting public agencies and government policies; and developing a sense of patriotism, civic identity and “social optimism” in the general public.

In addition, many publications in the regions that receive media subsidies are also indirectly supported through forced subscriptions, whereby organizations and individuals are required by local authorities to take out subscriptions to outlets. Such a policy also distorts the development of a healthy media market.

If the state is interested in encouraging the development of a sustainable media market, subsidization via the state order program is not the only way of going about it. A more efficient way would be for the state to allocate funds that would help all media outlets by reducing printing costs and the costs of distributing newspaper and periodicals via Kazpost, the national postal service.

Authorities could also encourage greater transparency by issuing public reports on allocations, and by requiring articles produced using public money to carry a disclaimer. Such measures would bolster professionalism by encouraging journalists to publish higher-quality material, rather than simply filling column inches.

"Our ultimate goal is to see the state order for the media abolished. We believe that the government should provide support to the media, but only support, without interfering in editorial policy," Okremova contends.

Anton Artemyev is the executive director of the Soros Foundation-Kazakhstan.