Campaigners said the project would have ruined the pristine beauty of the Bozzhyra escarpment. 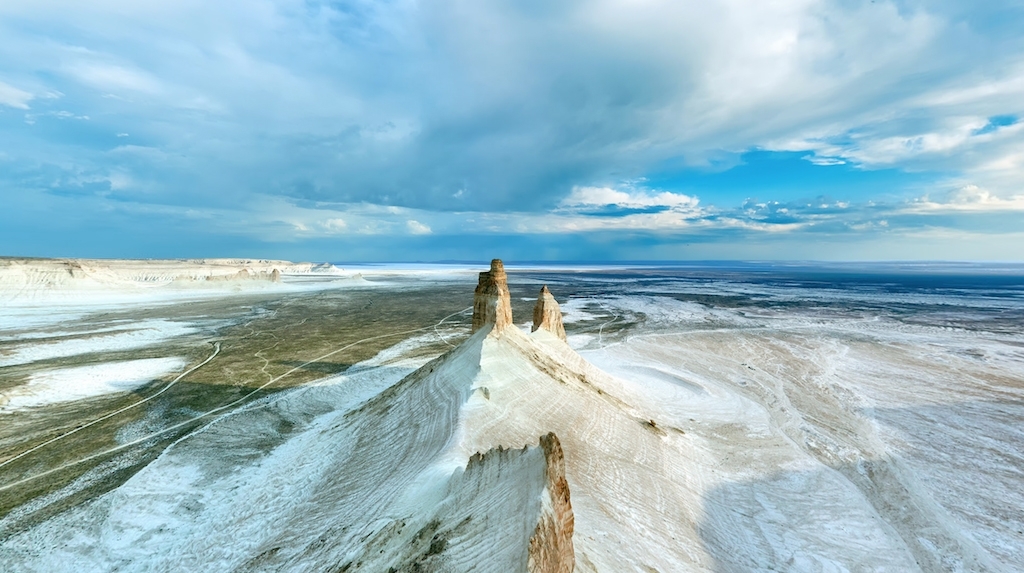 Developers of a sprawling, multimillion-dollar hotel project in an area of pristine natural beauty in western Kazakhstan have caved under public pressure and put a stop to construction. For now.

Tethys Aktau IV, a company jointly owned by Turkish businessman Fettah Tamince and the government of Kazakhstan, said it will study the concept to see if there are ways to improve it before proceeding, Almaty-based news agency KazTag reported on April 12, citing local officials.

If confirmed, the suspension of works will be eagerly welcomed by campaigners who had fought to prevent a project that threatened to ruin the unspoiled appeal of the nearby Bozzhyra escarpment, a pair of towering, rocky fingers in the heart of the Ustyurt Plateau in the western Mangystau region. For its admirers, the attractiveness of the 200-meter-tall formation, dubbed by some as “sugar castles,” lies precisely in the secluded desolation of the setting.

The Bozzhyra hotel was conceived as a bookend development to accompany another major investment undertaken by Tethys Aktau IV. In 2020, the company launched its upscale Rixos Aktau Resort in the Caspian city of the same name, around 300 kilometers west of Bozzhyra. The Bozzhyra ethno-tourism complex was expected to cost 40 billion tenge (around $90 milion) to complete and feature 50 luxury villas, swimming pools, parking areas, stables, and a helipad.

Amid much public discontent over the project, President Kassym-Jomart Tokayev at the end of 2020 instructed the government, which holds its stake in Tethys Aktau IV via the Kazakhstan Development Investment Fund, to consider moving the construction site to a location four kilometers away. Work had since then come to a standstill.

The derailing of the Bozzhyra project may fit into a larger political picture.

As the government probes ever further into the financial affairs of the extended family of former President Nursultan Nazarbayev, businesspeople who prospered through their association with the retired leader – such as Tamince – may be coming under closer scrutiny.

In the end, it is palace intrigue that might have saved Bozzhyra, not environmentalism.