July has seen 100 convictions so far, but there is little faith in investigators’ impartiality. 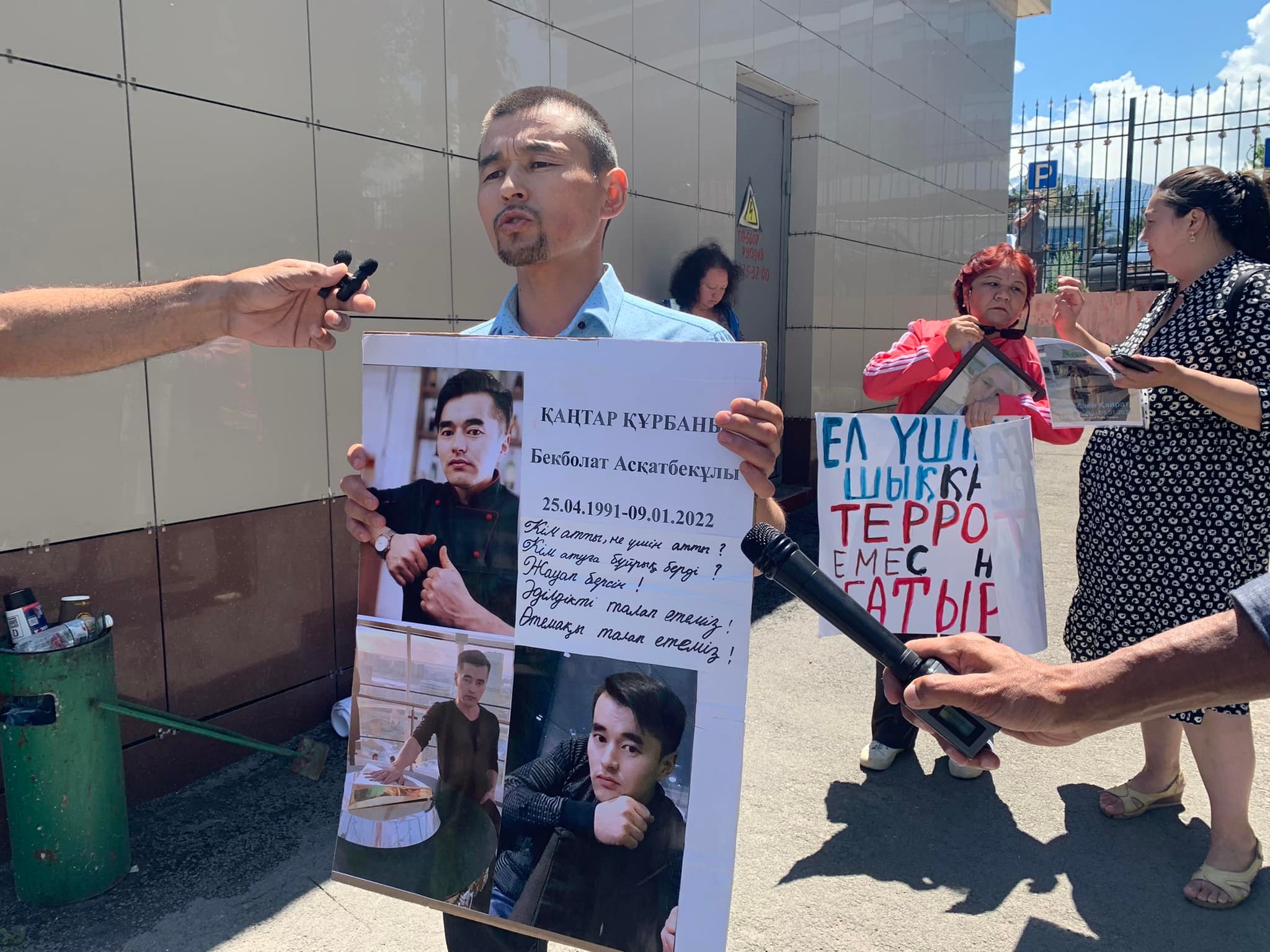 On July 15, a court in Shymkent, Kazakhstan’s third-largest city, sentenced to jail three people who took to the streets during January’s political upheaval.

One of the defendants, Lyazzat Dosmambetova, said that during the January 5 protest outside Shymkent’s city administration she shouted, “Old man out” – a reference to Kazakhstan’s first president, Nursultan Nazarbayev. She also called for a parliamentary republic, she said.

“I heard screams, but I did not see any disorders in the area where I was standing,” Dosmambetova was quoted as saying by RFE/RL’s Kazakh service Azattyq before her sentencing.

Dosmambetova received three years and seven months imprisonment for “participating in public disorder.” Co-defendants Kairat Sultanbek, who claimed in court to have witnessed a man shot dead by security services on January 5, and Zhanmurat Ashtayev, received similar terms for the same crime.

Their judgement was one of many in the last few weeks, suggesting authorities are eying an endgame in the investigation of events that left at least 238 dead and are now known popularly as “Bloody January.”

Across the country, defendants are overwhelmingly facing the same charges as the Shymkent trio. This trend has contributed to consistent and widespread doubt over the official narrative that Kazakhstan was plunged into turmoil by terrorists who were seeking to seize power.

Other verdicts include the sentencing of seven people to probation-like punishments on public disorder charges in the northeastern city of Ust-Kamenogorsk on July 14.

In the western city of Aktobe on July 7, three men each got three-and-a-half years of restricted freedom after being accused of an attempt to seize the airport. They admitted their guilt.

A man in the northern province of Kostanay was sentenced on June 24 to a year on probation for spreading false information on Telegram – specifically that elite special forces units had switched sides to the protesters.

One of the heaviest sentences so far was handed down to Alibek Imanbekov, a father of two in Almaty, who received six years for allegedly stealing weapons on July 11 after maintaining in court that he had been tortured into confessing.

Kazakhstan’s prosecutor general Eldos Kilymzhanov said on July 18 that 545 people had been sentenced to date in connection to the unrest, exactly 100 more than the last time the same official briefed on the investigation on June 30.

There are 32 criminal cases open in connection to acts of terrorism, all of which are being investigated by a special prosecutor.

Kilymzhanov complained that defendants and their supporters were attempting to “put pressure” on the investigation, including via social media, and that interference in the investigations was a prosecutable offense.

If Kilymzhanov’s figures hint at the scale of Kazakhstan’s January turbulence, the recent reports of convictions point to its geographic spread, encompassing multiple provincial capitals.

In Almaty, the epicenter of the violence, high-profile trials have been slower to conclude, a fact that defense lawyers attribute to the volume of the evidence base, accusations of torture during the investigations, and possible political foot-dragging in a city where civic activism around the trials is strongest.

Almaty-based civil rights campaigner Bakytzhan Toregozhina said that those trials she had observed so far were “not transparent and open.”

“The investigation, unfortunately, took place in [conditions of] one-sided, accusatory bias. Many people – and not just many, almost all – who consider themselves innocent, have not been able to prove their innocence. Not during the investigation and not in court,” she told Eurasianet.

In contrast, there has been little progress in the few cases wherein officers face charges over torture, she said.

“For some reason, the ones considered guilty are the ones that took part in peaceful protests, but who were not seen rioting, or using violence, or causing the death of people,” Toregozhina added.

Revenge, or at minimum, deterrence of civil activism, appears to be a motivation for some of the verdicts.

In Shymkent, Ashtayev, Dosmambetova and Sultanbek received real jail sentences – rather than the probation-type judgments received by others for the same crime – because they had already been found guilty of “membership in an extremist organization” when the unrest broke out.

This designation refers to the Democratic Choice of Kazakhstan movement, an opposition group with no known history of violence.