The loss of the market threatens to suck considerable economic vitality out of Kazakhstan’s business capital. 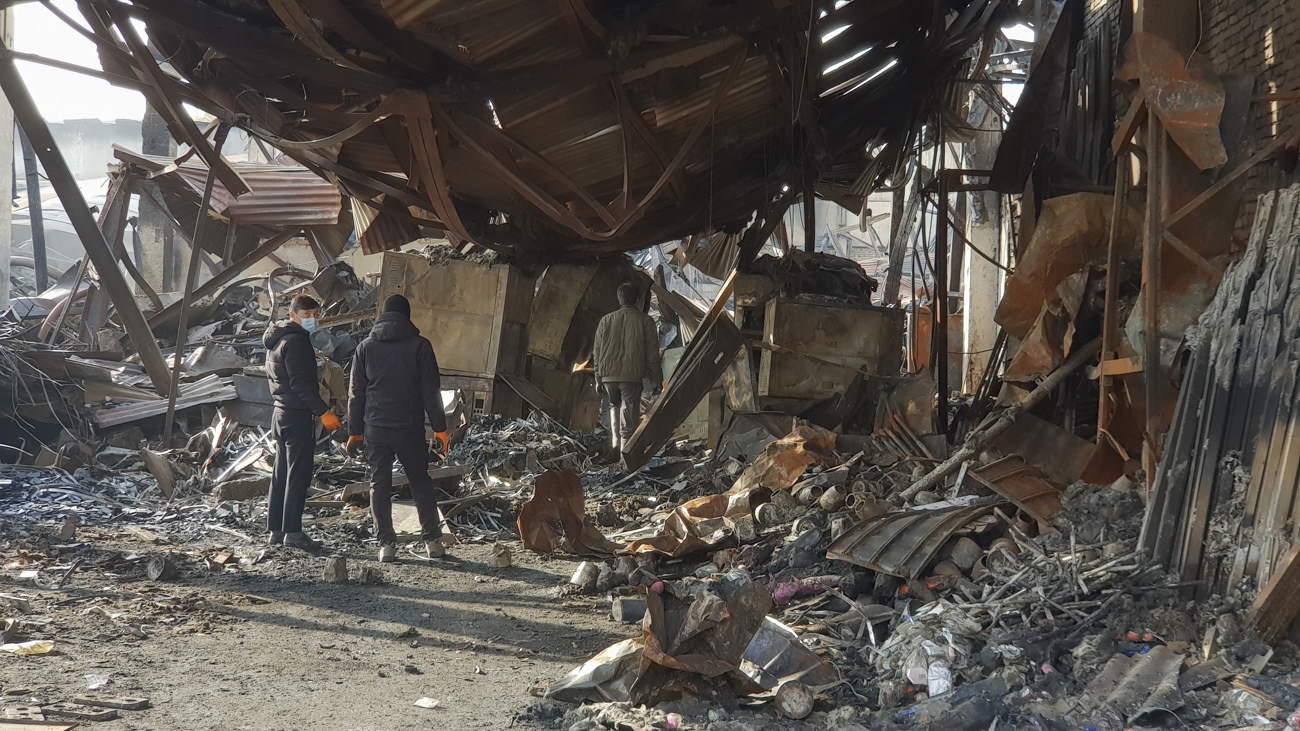 Barakholka Bazaar after a recent fire. (All photos by Almaz Kumenov)

It was around lunchtime on the first day of November when thick plumes of acrid smoke billowed into the sky over Barakholka, Almaty’s sprawling archipelago of wholesale bazaars. A two-story warehouse had caught fire. The blaze spread fast, destroying furniture, household appliances and crockery.

People have been predicting the demise of Barakholka – a confounding maze of shipping containers, stalls and warehouses on the northern edge of Kazakhstan’s business capital – for over a decade.

This time they may just be right. The Almaty government, which wants to see consumers gravitate toward a more modern form of shopping, has long tired of the bazaar. And the fires never seem to stop.

During the latest blaze, workers were quick to evacuate the building, so no lives were lost. But the financial damage caused by the fire will be felt for some time.

“We had crockery in there worth 70 million tenge ($188,000). They won’t let us in,” a woman in her fifties called Bakhyt told TV journalists, her voice breaking with emotion, shortly after the fire. 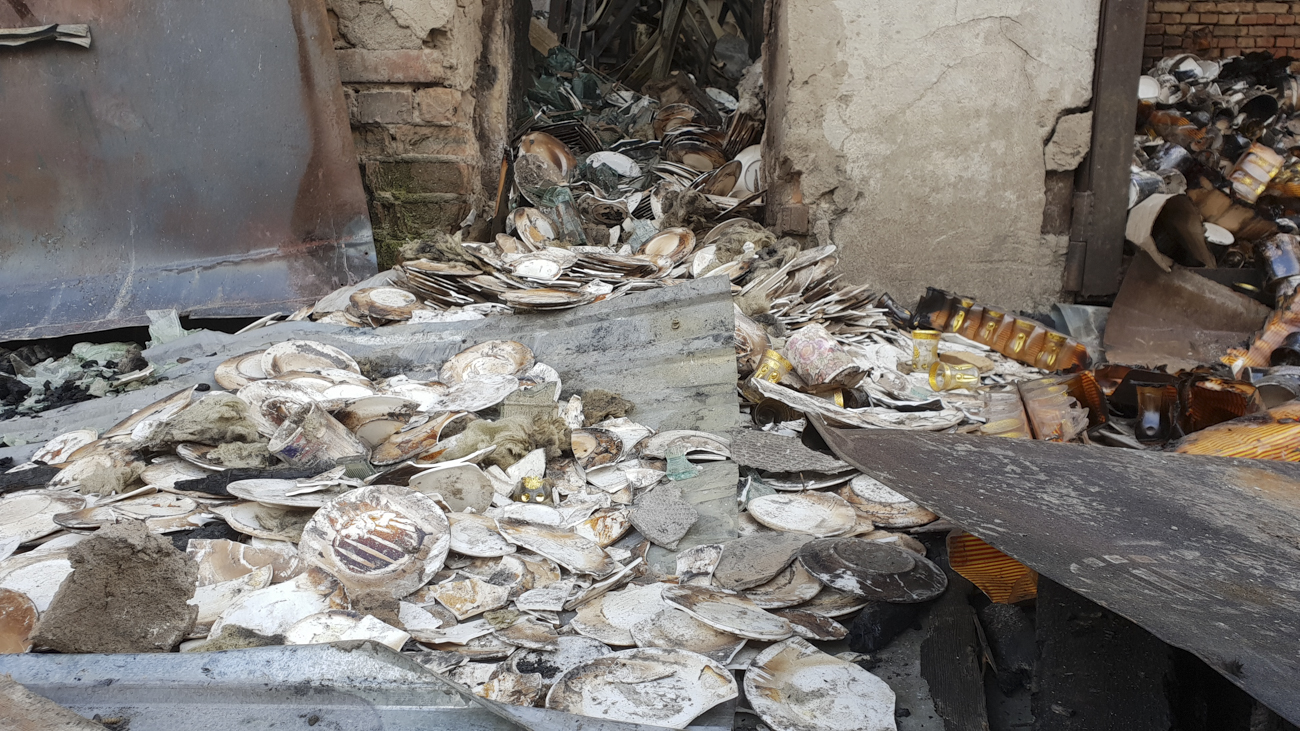 One stallholder, Rafik Azizov, was at the Kazakh-Chinese border on a supplies run when he got a phone call about the fire. He lost his stock of electric ovens and fridges. He was not insured.

“I have six children and I am the only breadwinner in the family. I don’t know what to do now,” Azizov told Eurasianet.

A representative for the company that owns the warehouse, who gave his name only as Batyr, told Eurasianet that the company had “stuck to the fire safety rules” and that this was the first time anything of this kind had happened. He refused to comment further.

But the reality is that fires have become frequent at Barakholka in recent years.

In September 2013, a produce market spanning 5,000 square meters went up in flames. Emergency officials traced the initial spark to welding work being done in the area.

Zhibek Azhibayeva, deputy head of the Kazakhstan Association of Trading Enterprises, told Eurasianet that she believes the bulk of fires at Barakholka tend to be the result of malicious action. 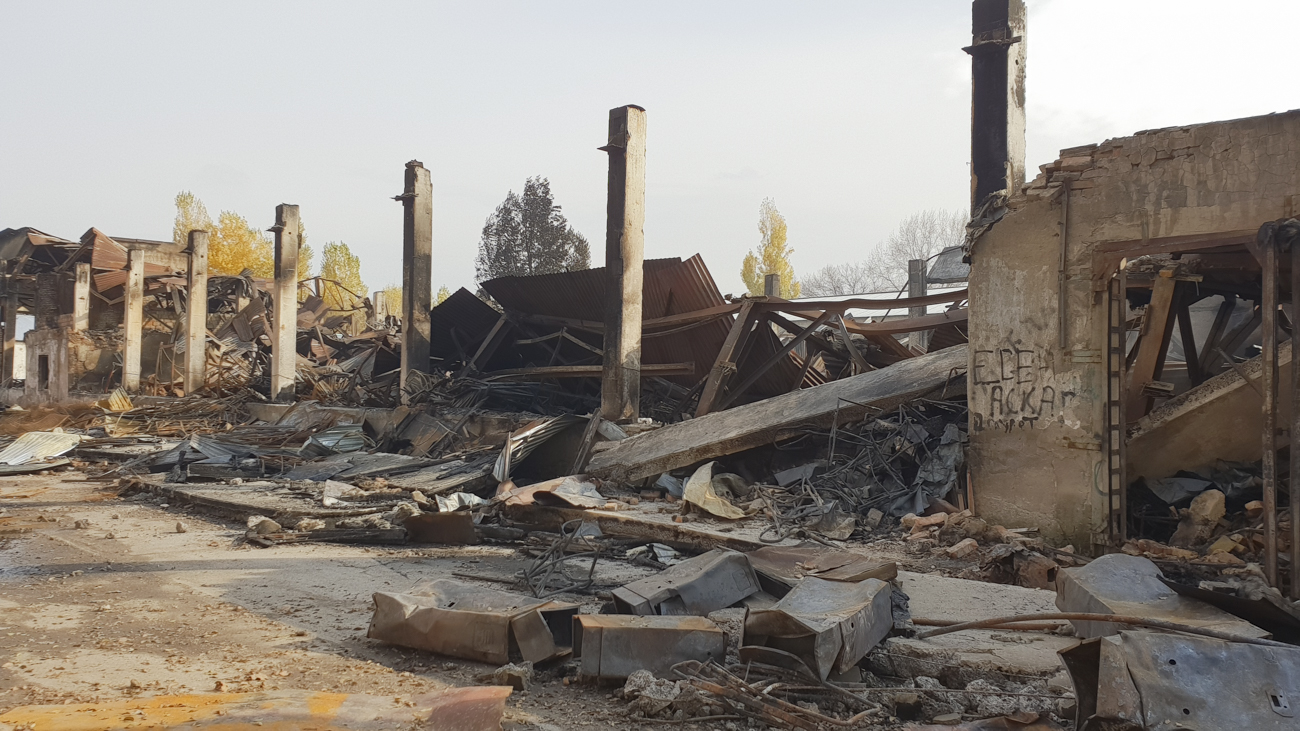 “While admitting that the cause of these incidents is arson, the Interior Ministry and the Emergency Situations Department have been unable to discover who was responsible,” Azhibayeva said.

The city government pins these blazes on the traders themselves for purportedly failing to abide by health and safety requirements. Azhibayeva said it is government inspectors who should be more closely monitoring whether safety provisions meet legal requirements.

Many traders have resigned themselves to the likelihood that they will soon have to seek employment elsewhere.

The loss of Barakholka threatens to suck considerable economic vitality out of Almaty. In a report compiled a decade ago, the World Bank found that annual turnover at the market stood around $1.8 billion and that Barakholka provided work – indirectly or otherwise – to around 250,000 people.

But the bazaar, which operates to a great extent in a gray legal zone, generates as much as chaos as prosperity. Visitors squeeze through narrow corridors of stalls, trying to dodge perilously fast-moving trollies piled high with bags and boxes. In summer, it is a stuffy cauldron. In winter, a chilly breeze whistles through. In the colder months, traders layer their clothes and nurse cups of tea and coffee bought from roving hot drinks carts. 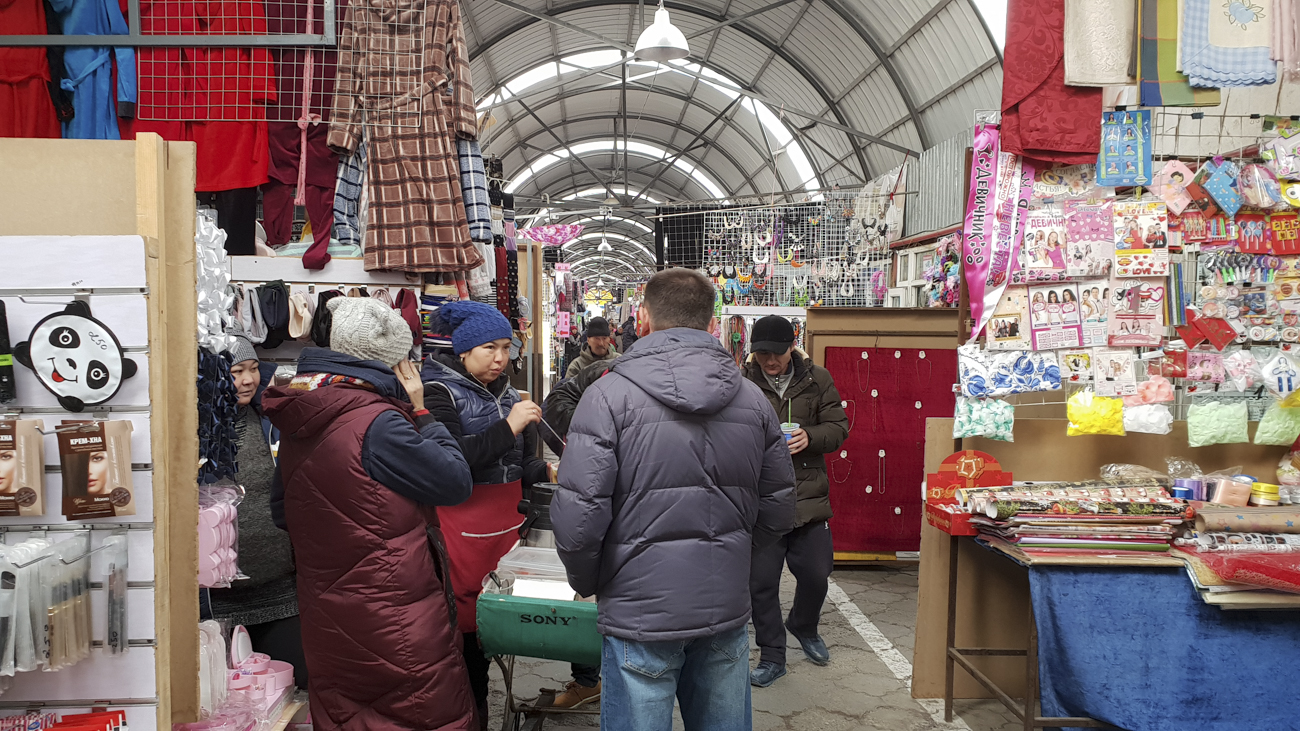 For the bargain-hunters, the prices are worth the discomfort.

“The people who come shop at Barakholka are those who cannot afford expensive stores in the city,” Madiyar Tleuov, a trader, told Eurasianet.

Tleuov, 37, has been selling shoes at the market for five years now. He admits that he would prefer to work in an office, but he lacks the qualifications. Still, when the going is good, the income is decent – around 300,000 tenge ($800) monthly.

“But everything is going to change here soon,” he said.

Almaty town hall has been grousing about Barakholka for years. Officials would prefer to see more malls, where they can keep closer tabs on traders and make sure they are paying taxes regularly and reliably.

In 2011, then-Mayor Akhmetzhan Yesimov ordered the demolition of a large section of Barakholka and that a mall be built on the spot. The idea was met with protest. Traders and stall-owners declared they would go nowhere.

Undeterred by the pushback, city authorities in 2014 demolished around three dozen markets at Barakholka, widened roads and erected a covered trading area complete with kiosks for hire. 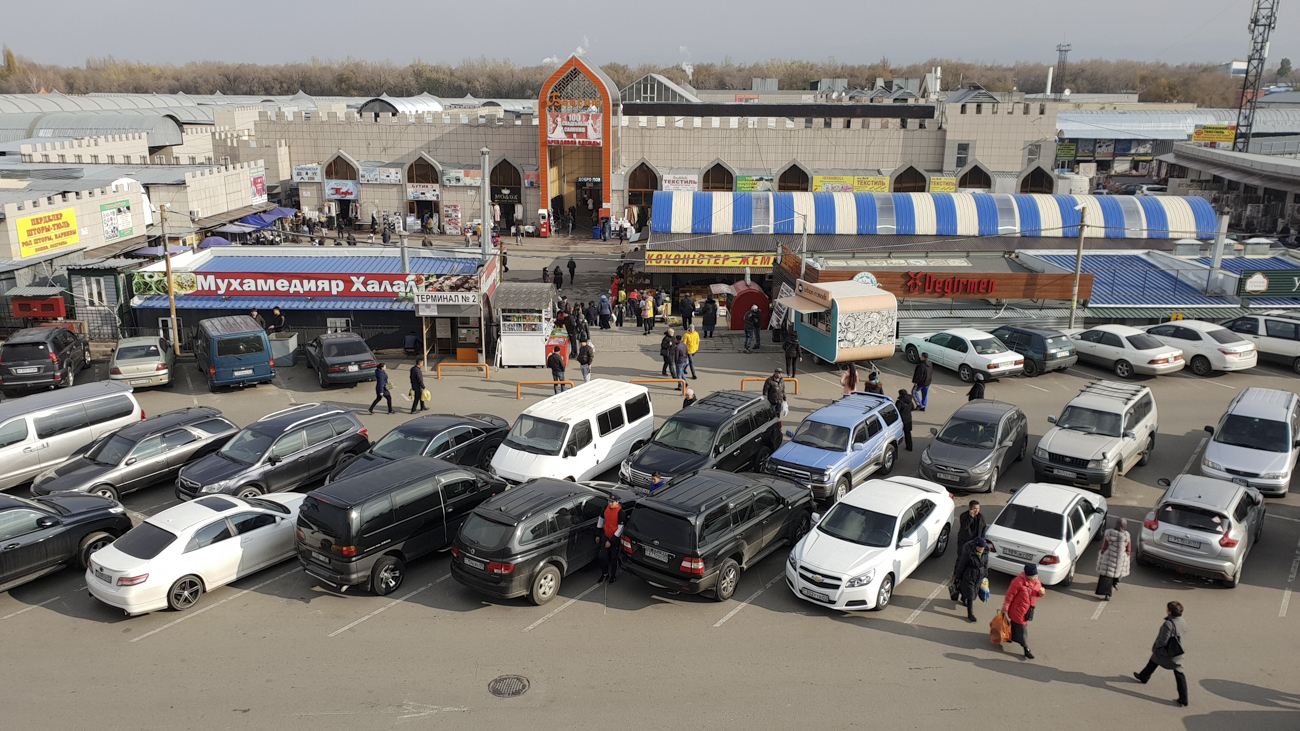 Tleuov grumbles that kiosks are more expensive to rent that a spot for a stall. And that pushes up prices for wares.

“This way people will stop coming to Barakholka,” he said.

Bayan Kuatova, managing director of consulting company Colliers International, is not mourning the evolution of shopping tastes. She says consumers only stand to benefit from the proliferation of well-ordained retail facilities with convenient parking areas. Shopping habits are changing and the draw of bazaars is waning, she said.

According to Colliers International, Almaty is dotted with around 30 malls today.

As for the produce markets, it is most often older people who buy their meat, vegetable and fruit in those places, said Kuatova.

“Modern city-dwellers with active lives do not have time to go to the market. It is easier for them to do their shopping at the nearest supermarket, where they are open till late or even round-the-clock,” Kuatova said.