Bringing politics to the stage can be difficult in a country where open discussion of government is implicitly discouraged. 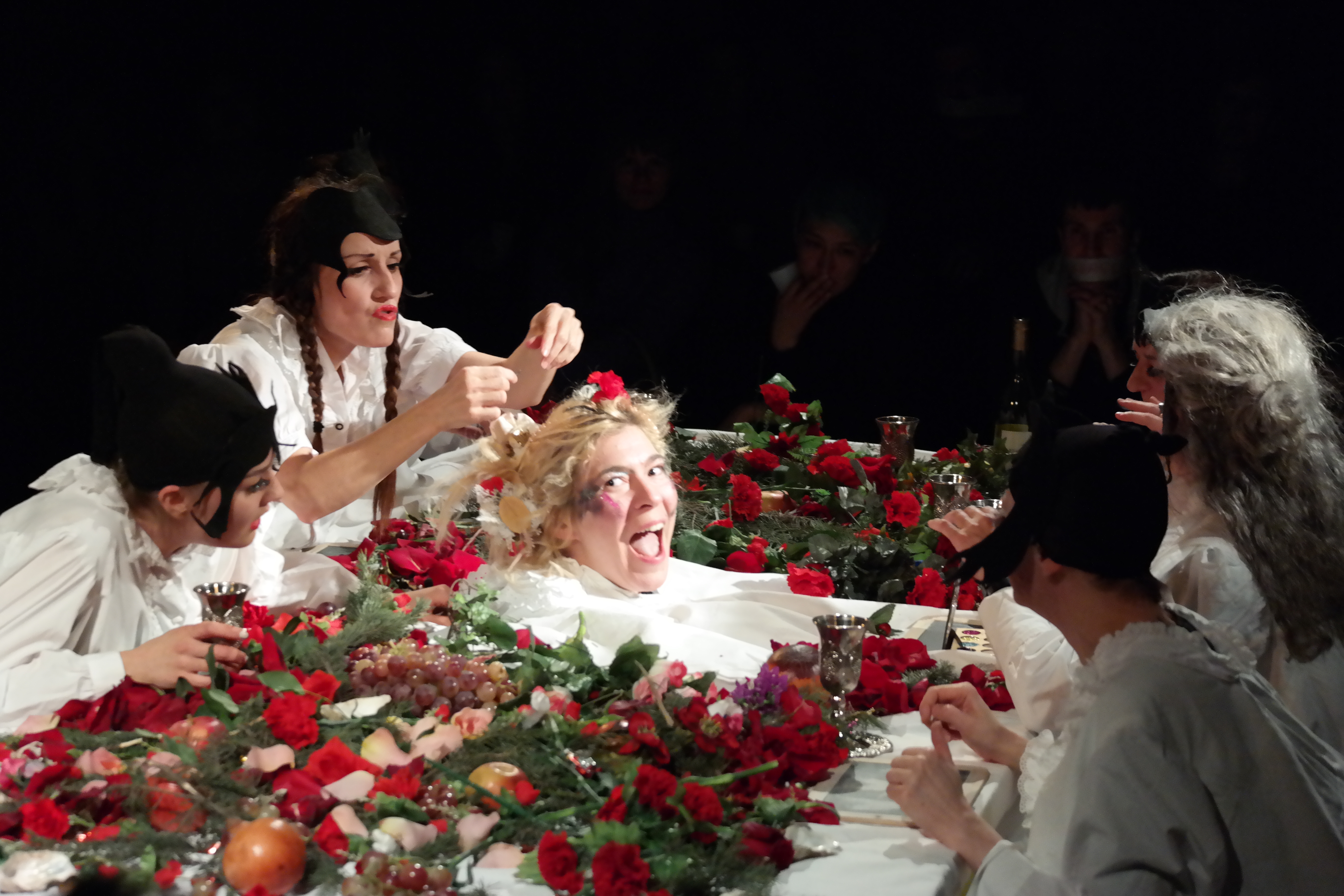 A scene from the production "Banquette des Platonnes" at Transforma, a new performance space in Almaty, Kazakhstan. (Photo by Paul Bartlett)

A man careers through haze as leather-coated figures give chase against a background of wailing sirens. When they reach their prey, the pursuers mete out a ruthless beating before dragging the man off to jail, where he will meet a gruesome end.

The scene played out in a recent theatrical dramatization of demonstrations that occurred in 1986 in what was then Alma-Ata, capital of Soviet Kazakhstan, when security forces crushed a rally of young Kazakhs.

This seminal and politically charged moment in Kazakhstan’s history was one of several sensitive themes to receive theatrical treatment at Almaty’s Revelation Festival, an annual event held this year under the rubric: “Look Your Fear in the Eye.” Aside from politics, the two-week festival, which wrapped up on February 14, also touched on women’s rights and transgender issues.

“It’s about overcoming fear,” festival director Olga Sultanova told reporters in January. “Through the theater, it is possible to look at such topics in a beautiful, subtle, light and intelligent manner […] and to reveal something new to yourself.”

State-run theaters in Kazakhstan incline toward running old favorites from the international canon, such as the works of Chekhov or Shakespeare. New productions typically cleave to uncontroversial patriotic themes, like the life stories of ancient Kazakh heroes.

Revelation Festival, now in its fifth year, has nudged the local theater scene in another direction. There are now 20 groups in Almaty alone performing more cutting-edge repertoires. And it is not just Almaty that is seeing the burgeoning of an indie theater movement.

StarTDrama, the troupe behind the musical production about the 1986 demonstrations — which is titled simply “86” — is based in Petropavl, a city near the Russian border. The group is the side-project of actors from the city’s state-funded theater who were itching to do something novel.

“86” is based on eyewitness testimonies of the protests. Everything from the beatings of demonstrators to their arrests and trials is dramatically interpreted through music and dance. The play culminates with the death of a protester in a prison cell, an episode based on the real-life fate of Kayrat Ryskulbekov in 1987. His death was officially deemed suicide.

Director Farkhat Moldagali said he chose to dramatize those events, which are known as Zheltoksan (“December” in Kazakh), because he was deeply moved by the episode and how history has handled it.

“I was upset that we are afraid to stage something like this because it’s politics,” Moldagali told Eurasianet on February 4, speaking after the production received a rousing reception at the Auezov State Academic Drama Theater. “More than 30 years have passed […] but people do not want to talk about it.”

Although the emotionally charged staging of “86” broadly followed the official Astana line that Zheltoksan was a Kazakh uprising that laid a path to independence, it was still ground-breaking in its way. Bringing politics to the stage in Kazakhstan can be problematic as open discussion of political affairs is implicitly discouraged. And Zheltoksan is especially tricky because the country’s long-serving president, Nursultan Nazarbayev, was a prominent Soviet apparatchik when the events took place. Even veiled criticism of Nazarbayev is one of the government’s many red lines.

As one Kazakhstani arts correspondent remarked after watching “86”: “It’s dangerous to show political plays in Kazakhstan.”

The audience was enthused. But although the play mostly echoed the state-sanctioned narrative, some saw parallels with which the government might not feel so comfortable.

“Zheltoksan has had an impact on life in modern Kazakhstan, but those in government seem to have forgotten about ordinary people and do not care about them now,” one spectator, Lyazzat Kurmangaliyeva, told Eurasianet.

If “86” was aimed at sparking a conversation about history, another recent performance addressed more current issues.

Kyz Kuu, which had its premiere a week before the Revelation Festival, was a dance drama about bride-kidnapping based on verbatim accounts of women snatched and married off against their will in Kazakhstan. This practice is illegal but is still regarded by some as a “national tradition.”

“We wanted to talk about what is tradition and what is violence, and where the line is drawn between tradition and violence,” producer Marina Konstantinova told reporters in January.

Kyz Kuu is the first production of a series of three plays developed from a British Council-sponsored masterclass with UK-based theater director Jan-willem van den Bosch in 2017.

Women’s rights were also at the fore at the festival. An all-woman troupe from France, Les Platonnes, presented a feminist take on Plato’s “Symposium,” an imaginary gathering of male luminaries in ancient Greece.

Men in the audience were gagged with duct tape to silence them for the duration of the production. Not only could the men not speak; they weren’t allowed to sample the free wine offered to the women present. The show consisted of performers gathering around a table strewn with flowers and food as a disembodied talking head at the center engaged in a wine-fueled discourse on male and female identities interspersed with bursts of song.

“I liked it […] It was surprising,” spectator Anel Zhunusova told Eurasianet after the show. “The script is interesting, as is the genre. Not just that they gagged the men, but the fact that we got to hear women’s points of view on love, on the role of women in life, or the role of men in life, on their relations.”

“I think the role of the arts is to bring new ideas into people’s lives,” she added, as a lively post-performance discussion proceeded between the audience and cast members at Transforma, an artsy new performance space in downtown Almaty. “It’s great.”

The staging of “Testosterone,” the true story of Kit Redstone, a transgender man from the UK who wrote and stars in the show, pushed the envelope even further. The production before a packed house in Almaty included scenes of nudity and same-sex kissing – sights rarely, if ever, seen on the stage in Kazakhstan.