Kazakhstan: The mothers that became the faces of dissent

Government critics argue that the ruling has transformed the protestors, three of whom are mothers of young children, into political martyrs. 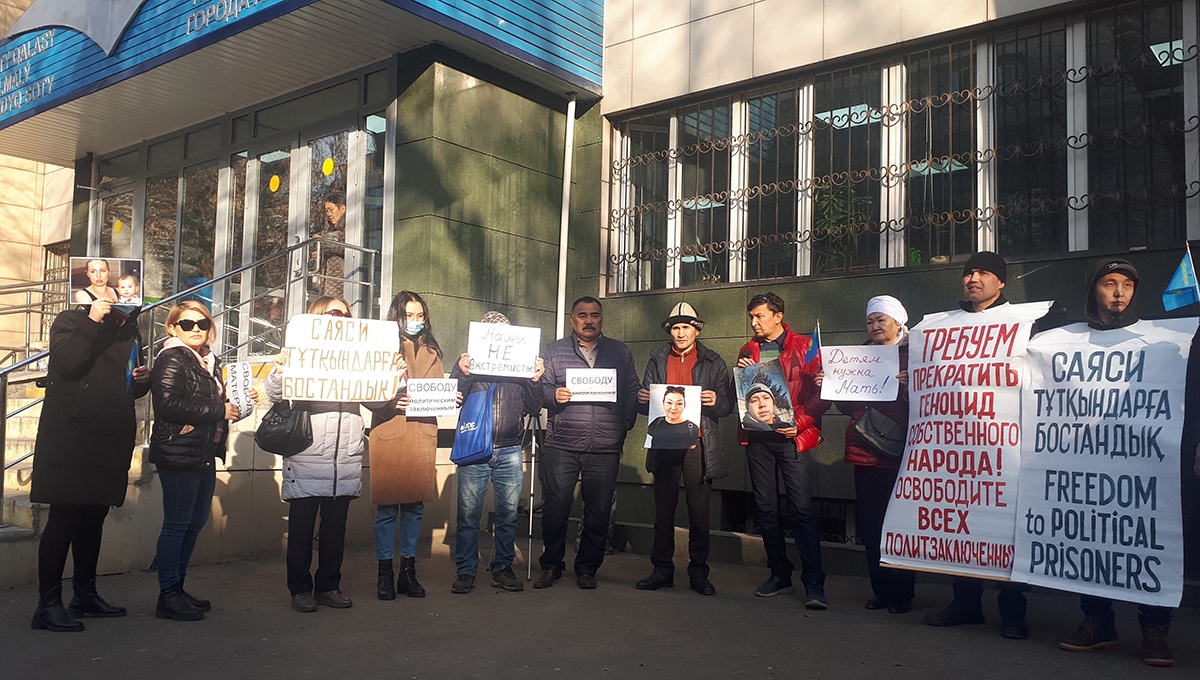 Protestors outside the courtroom on the final day of the trial. Some carried placards urging the release of “political prisoners” – a bold stunt seeing how two men were jailed for doing the same thing at an earlier hearing. (photo: Joanna Lillis)

Oksana Shevchuk was still breastfeeding when she was arrested.

Her subsequent conviction earlier this week – on charges of adherence to a proscribed political movement – was triggered by her attendance at a demonstration against Kazakhstan’s government in May.

The authorities clearly hope that the sentencing of Shevchuk and three other likeminded activists will, for now, dampen enthusiasm for dissent. But analysts and critics of the authorities argue this ruling has transformed the prisoners, three of whom are mothers of young children, into martyrs for a political cause and an ongoing test for the self-styled reformist government of President Kassym-Jomart Tokayev.

The scene outside court on sentencing day, November 19, was a lively one. Supporters of the defendants chanted: “We are the people! We are the power!”

It had not been much less rambunctious inside the courthouse, where lawyers, defendants and the prosecutor fierily debated the limits and merits of free expression and assembly. The boundaries of these liberties are again in play following the surprise resignation of Nursultan Nazarbayev as president in March and the ascent to power of Tokayev, who has promised to usher in a “listening state.”

The protest in Almaty that precipitated the arrest of Shevchuk and three co-defendants – Gulzipa Dzhaukerova, Zhazira Demeuova and Anuar Ashiraliyev – took place on May 1. That was one week after Tokayev was formally named as the presidential candidate for the ruling Nur Otan party, and six weeks before he would go on to be elected.

Shevchuk, Dzhaukerova and Demeuova, who were among the most prominent participants of that rally, all had their children in tow and used megaphones to address a crowd of several hundred people. Their rallying cry at the protest, the largest that Kazakhstan had seen for some years, was against what they saw as the prevailing social injustice.

As Shevchuk later told Eurasianet, the purpose in bringing her daughter, whom she carried in her arms throughout the event, was to signal her peaceful intent and the relevance of her message for future generations.

With her waist-length blonde hair and engaging oratory style, she cut a striking figure. For Kazakhstan, this was a new type of demonstrator: an ordinary person, rather than a seasoned opposition activist, prepared to brave draconian rules against unauthorized rallies.

While the defendants in this trial had broadly confined themselves at the demonstration to airing socioeconomic grievances, others had more explicitly political messages. Some marchers shouted slogans like: “No to dictatorship!”

Shevchuk is something of a novice on the activist front. The mother of four, born in 1989, the year Nazarbayev became leader of Soviet Kazakhstan, only got involved in civic activism at the start of this year. It was around that time that mothers across the country had begun to coalesce into a vocal lobby group as they made impassioned calls for improved education, healthcare and welfare provisions.

The problem for Shevchuk and her allies was that the Almaty demonstration had been called by France-based Mukhtar Ablyazov, the leader of an opposition group called the Democratic Choice of Kazakhstan, or DVK. A court in Kazakhstan last year designated the movement as extremist, a ruling that exposed supporters and sympathizers to severe legal action.

By linking the quartet of defendants to DVK, prosecutors were able to call for prison terms of up to two years.

The defendants denied that they were members of DVK or that they were acting on Ablyazov’s orders to stoke unrest in return for payment, as claimed by prosecutors. They admitted only that they support his stated reform agenda.

“I have the right under the constitution to express my thoughts,” Demeuova told Eurasianet in a recess. “I merely spoke about my own social problems, and I was arrested for that.”

In the end, the four escaped prison terms, although they had spent months in custody awaiting trial. The judge opted for a milder sentence of one year of restricted freedom, a punishment that requires the group to abide by a curfew and check in regularly with the police.

The court also banned the defendants from engaging in public activity for a period of two years, thereby “de-activating the activists” as defense lawyer Gulnara Zhuaspayeva put it.

The case was designed “to serve as an example to others,” Zhuaspayeva said.

Shevchuk, who spoke to Eurasianet at her home in the presence of her lawyer, Galym Nurpeisov, on the day after the conviction, said she was overjoyed to be home but dismayed by the disruption the trial had wrought on her personal life. Eva, her one-year-old daughter, is struggling to re-bond with her, Shevchuk said.

Trials like this show that “all citizens who really have the courage to express their opinions are subjected to these repressions,” civil society campaigner Marzhan Aspandiyarova told Eurasianet outside the court.

Still, the sentence was more lenient than some had anticipated. The precedent with DVK-associated cases has been for severe custodial penalties. Last year, Aset Abishev, who was identified by investigators as a sympathizer of the movement, was imprisoned for four years just for remarks he made on social media.

It is possible the authorities recognize the heavy-handed approach is proving counterproductive.

Analyst Dosym Satpayev believes the tactics are backfiring, “since Ablyazov’s popularity is growing even more among protest groups who do not believe in the reforms” pledged by Tokayev.

Nur-Sultan has shown greater leniency towards pro-reform movements with no links to DVK, in what looks like a tactic to divide and rule the opposition and create a veneer of liberalism.

For all Tokayev’s promises of dialogue with civil society, however, powers of persuasion are not Nur-Sultan’s strong suit, said rights campaigner Galym Ageleuov.

“The nature of an authoritarian regime does not permit it to act with lenient methods,” he told Eurasianet. “If the opposition mood grows, they will keep suppressing it with forceful methods, and turn people against themselves even more.”

Government opponents are undoubtedly emboldened. Around 70 people turned up to show solidarity on the final day of the trial, some bearing placards urging the release of “political prisoners” – a bold stunt seeing how two men were jailed for doing the same thing at an earlier hearing.

As supporters waited for the convicted quartet to leave the courthouse, they chanted “Freedom!” and “We are the people! We are the power!” When the four finally appeared, the crowd burst into applause and delivered a lusty rendition of the national anthem.