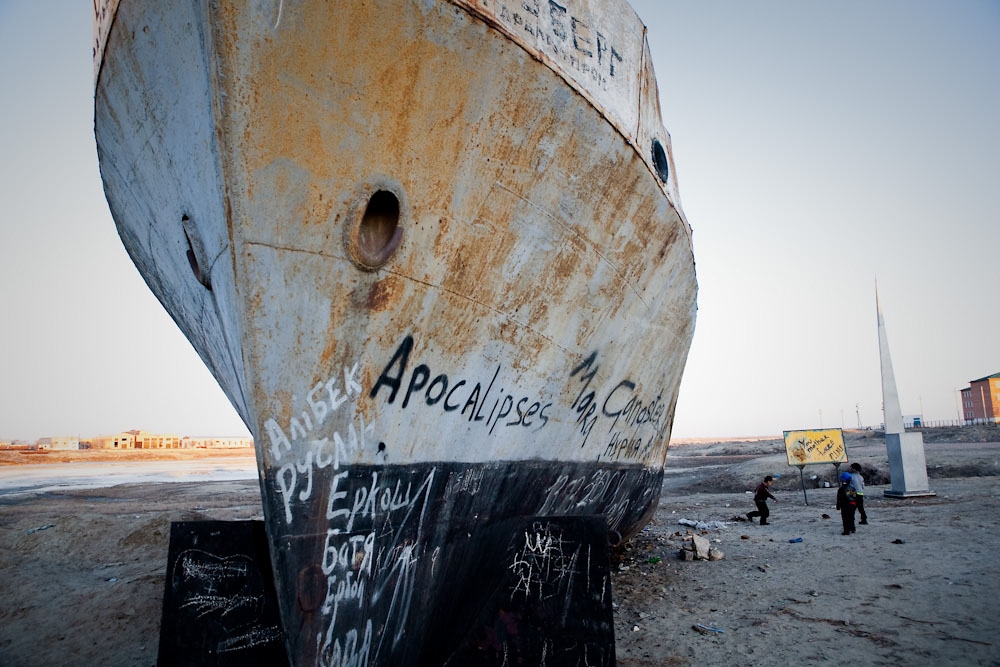 The Lev Berg, named after a Soviet geographer of Central Asian lakes, sits rusting in the dry harbor of the town of Aral. (Photo: David Trilling)

The rusting portholes of the Lev Berg, once a proud vessel in the Aral fishing fleet, stare out across the garbage-strewn expanse of the dry Aral Sea bed. The rotting, graffiti-covered hulk of this ship, resting in what used to be the harbor of Aral (formerly Aralsk), is a testament to the environmental devastation that ill-conceived irrigation policies inflicted on the region. But amid such evidence of despair, fragile signs of hope are starting to appear.

Today, the shrinking sea is a source of health risks. But not so long ago it was a font of bounty. Locals talk wistfully of the time when the sea was associated with prosperity. "It was like a fairytale," Arman, a middle-aged resident, recalled to EurasiaNet. "Everything was different. The air was different; the climate was different; there were more people here. Now what's changed? Everyone's left, gone to live elsewhere. The weather's changed -- dust and wind and that's it."

The namesake of the rusting vessel in the erstwhile harbor, Lev Berg, was a Soviet geographer famed for his studies of Central Asian lakes. He would be turning in his grave if he saw the current state of the Aral Sea, now shared between Kazakhstan and Uzbekistan: what was in 1960 the world's fourth largest lake is now a shadow of its former self. Starved of water as the Syr Darya and Amu Darya rivers were diverted to feed thirsty crops such as cotton and rice, the sea contracted by 70 percent from 1960 to 2004. Overall, the sea level has dropped by 20 meters, and in the late 1980s the Aral split into two parts.

Kazakhstan's former fishing village of Bogen once enjoyed near mythological status in the Soviet Union, its fishermen lionized during World War II for supplying truckloads of their catch to soldiers fighting on the eastern front. Bogen is now well inland, and camels roam what was once the seabed. On a late March afternoon it was engulfed in one of the dust storms that have become more common since the Aral started drying. These storms kick up cloud of salt, dust and toxic substances across inhabited areas. "This is how we live here," said an elderly resident who worked in the local fish factory before it closed down, as he stood in line to pump water from the village well. "You see how it all goes up when the wind blows."

Although conditions in the vicinity of the sea are currently grim, there is a whiff of hope in the air: a 13-kilometer dike opened in 2005 is leading to a recovery of the Northern Aral Sea (NAS) in Kazakhstan. Fired up by this success, officials are working to launch the project's second phase, intended to further expand the NAS. Optimists say that within a few years the sea could again be lapping at the shores of the town of Aral, bringing environmental recovery and new economic opportunities.

This dike was combined with new hydro-facilities along the Syr Darya which have increased the flow into the NAS and are also rehabilitating surrounding wetlands. The project cost Kazakhstan's government $86 million, of which $64.5 million came from a World Bank loan. Today, the NAS's surface area is 50 percent larger than it was at its lowest point. "The facility is working in line with the design -- preserving the NAS at the level of 42 meters," Serikbay Smailov, chief consultant and coordinator at the Agriculture Ministry's Water Resources Committee in the regional center of Kyzylorda, told EurasiaNet.

The shrinking of the Aral led to increased saline levels, killing the fish in the sea. Now, however, saline levels have halved and fish are being reintroduced in the hopes of reviving the fishing industry. Catches have risen from 52 tons in 2004 to 1,490 tons in 2008. "Last year there were a lot of fish," said Tolyk, a fisherman from Bogen who is looking forward to fishing in the Aral Sea again when the fishing season starts shortly. In the town of Aral, where a new fish processing plant with an annual capacity of 6,000 tons has opened, traders are happy to cash in on increased catches. "[Fishermen] brought a lot of fish last year. I hope they'll bring more this year," said Sagyda, who runs a fish stall in the market.

A feasibility study has been completed for the second stage of the project, which would take five to six years to implement. It is now being examined by government agencies and the World Bank. "This study makes proposals to improve the water management of the Kazakhstani part of the Syr Darya," World Bank task team leader Joop Stoutjesdijk told EurasiaNet.

The proposed measures include building a dike to separate Saryshyganak Bay (sometimes called Saryshaganak) -- on which the town of Aral stands -- from the NAS, boosting its recovery, and improving structures along the Syr Darya to expand the flow of water.

Smailov says implementation of the second phase should bring the sea back to the town of Aral, which now stands 35 kilometers from the shore. It will involve constructing a canal from the Syr Darya into the Saryshyganak Bay, which is at a higher elevation than the existing NAS. The new dike will maintain the water there, and another canal will channel it to the town of Aral. If plans for the second phase are approved, the World Bank expects a government request for funding around July and could make a loan available within a year, Stoutjesdijk said.

Amid the optimism in Kazakhstan, it is easy to forget that the NAS recovery does nothing to help the larger, still shrinking Southern Aral Sea, which is receiving little water from the Amu Darya. "In the late 1990s-early 2000s, the arguments made in support of damming the Small or Northern Aral were to preserve that part and abandon the largest portion of the Aral (Southern) to its fate of disappearance," Amanda Wooden, Assistant Professor of Environmental Studies at Bucknell University, told EurasiaNet. "A larger population surrounds the Southern Aral than the Northern Aral, thus any acceleration of negative impacts from the damming of the Northern Aral -- for example, more rapid desiccation of the southern part and its ramifications for ecosystem and human health -- raises distributive justice questions. If the southern lake declined more rapidly, there would be additional impacts in an already severe situation for the population in the disaster zone."

The subject is likely to cause hot debates at a meeting of the International Fund for Saving the Aral Sea in Almaty, scheduled to open on April 28, to be attended by heads of Central Asian states. For people living around the Northern Aral Sea, the prospect of its return is exciting, and the slogan on a poster hanging over a street in the town of Aral sums up the optimistic mood. "Good news," it says, "the mother sea is coming."