Kazakhstan: The Sweet Smell of Success 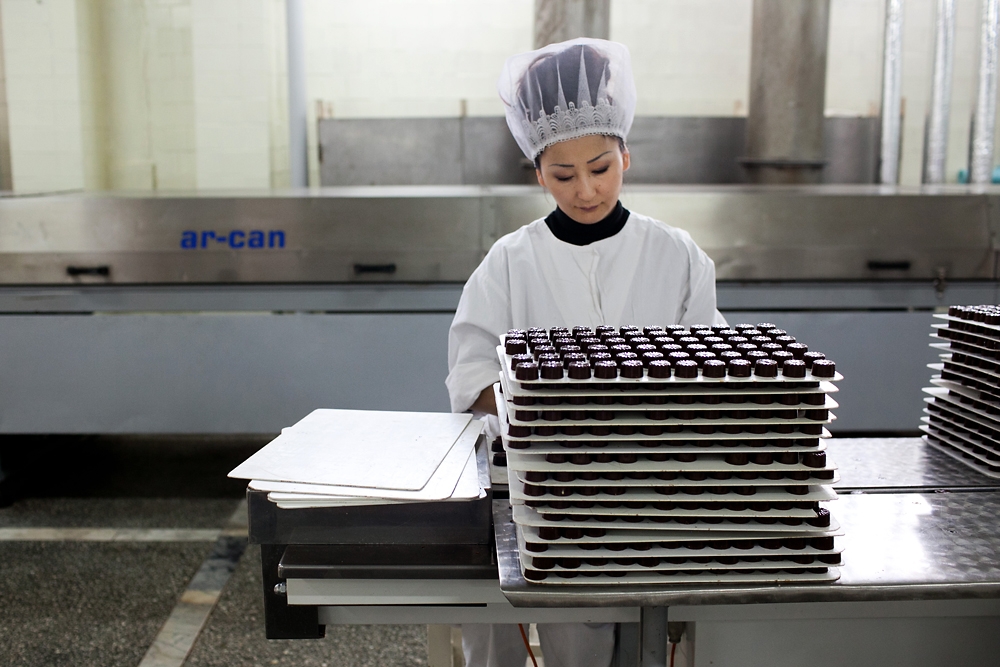 A woman sorts chocolates before feeding them into an automated wrapping machine. 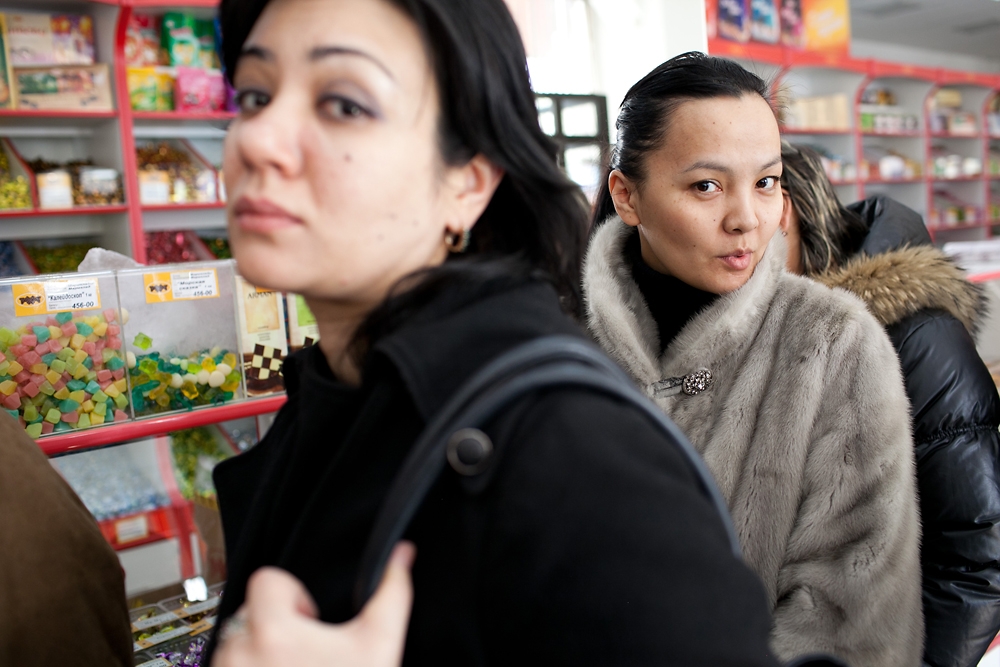 Shoppers queue to buy their favorite sweets at the Rakhat store. 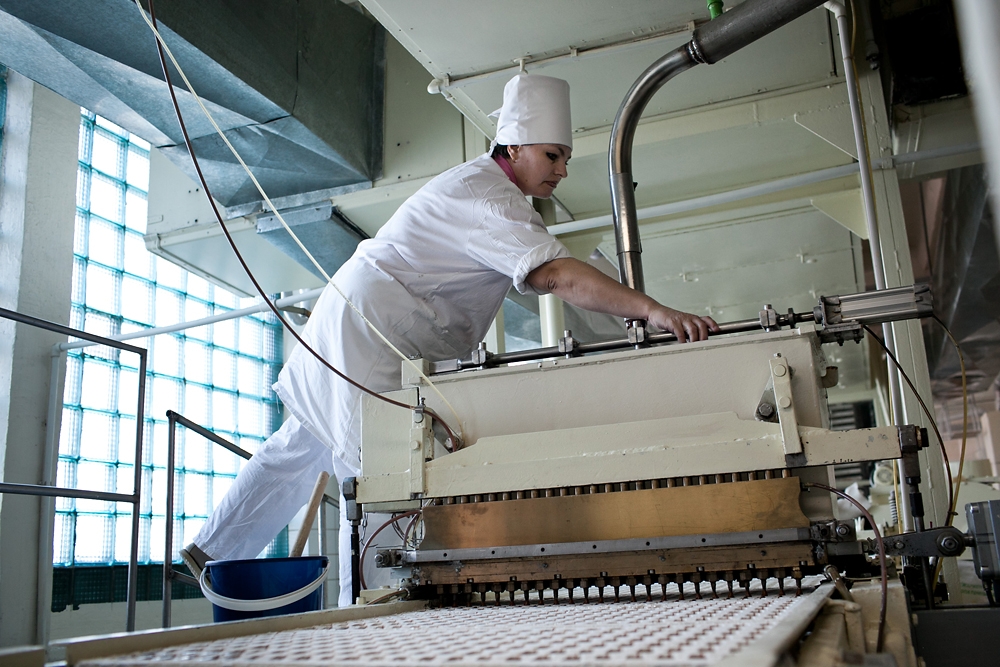 A worker monitors as a machine squirts chocolate into molds. 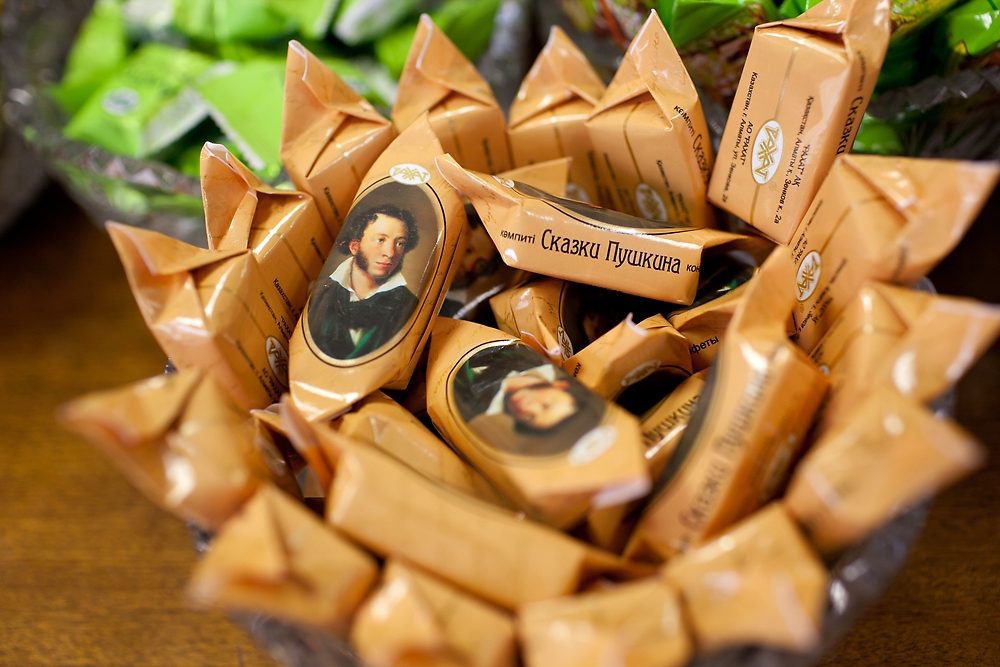 "Pushkin's Fairy Tales" is one of the chocolates produced at Rakhat. 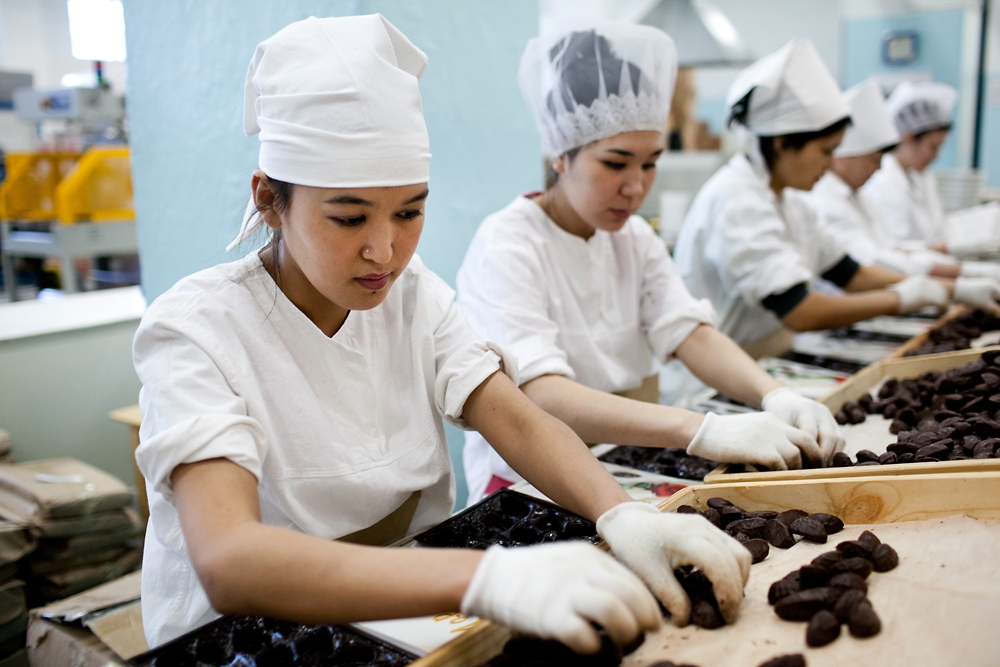 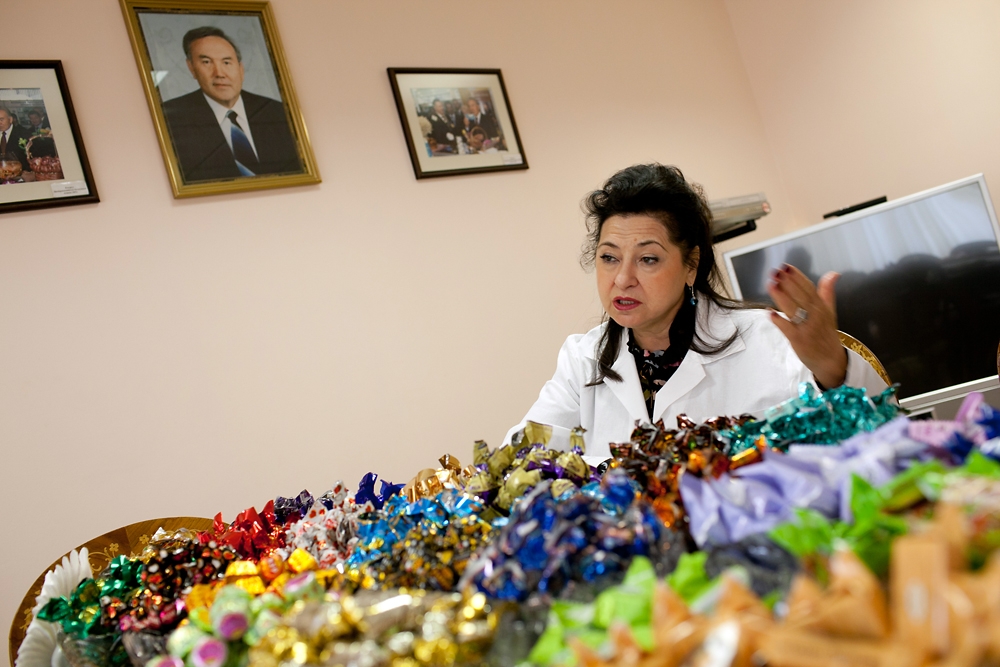 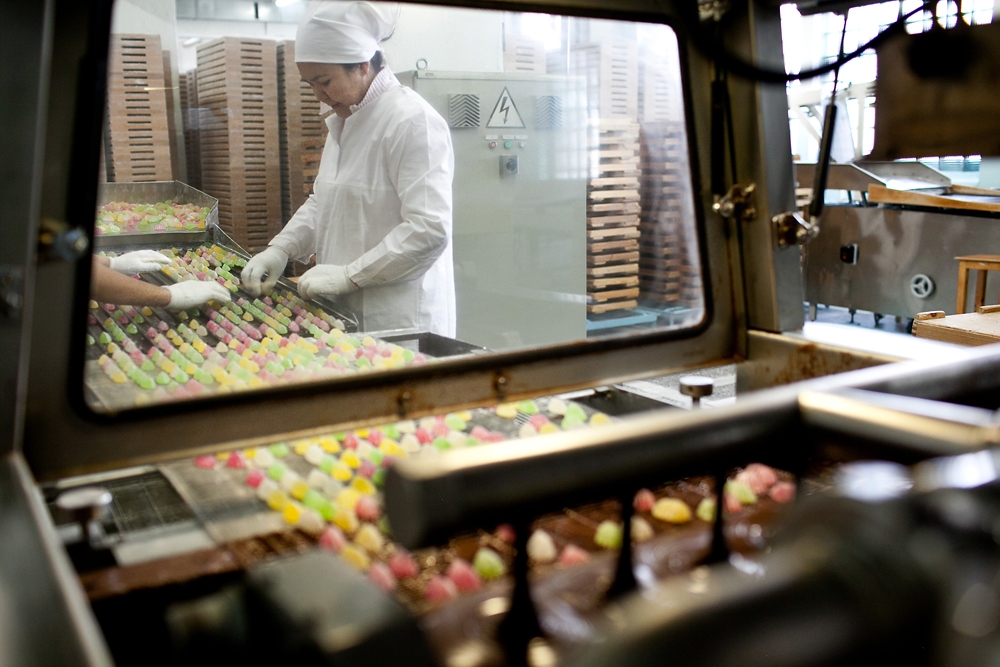 Workers sort candies before they are covered in chocolate. 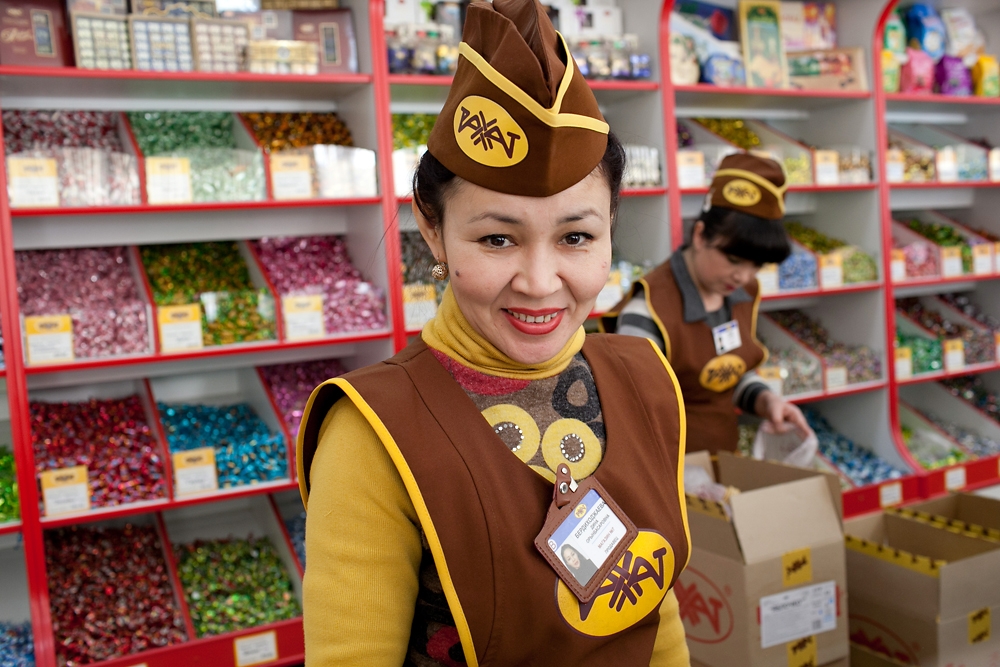 A sales lady at the Rakhat store helps shoppers select from dozens of candy variations. 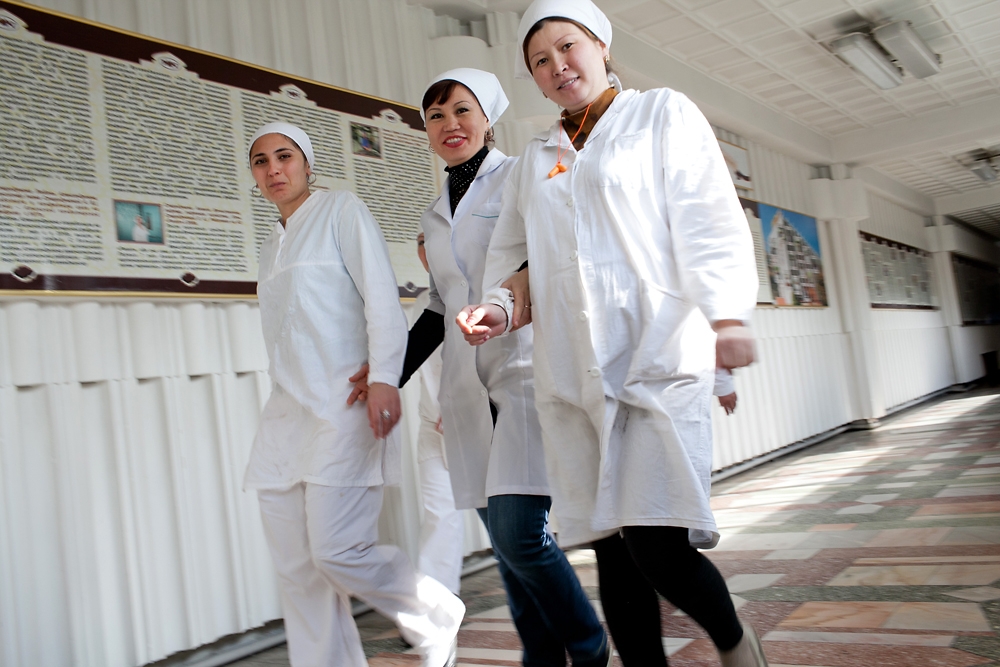 Women leave the factory for a break. 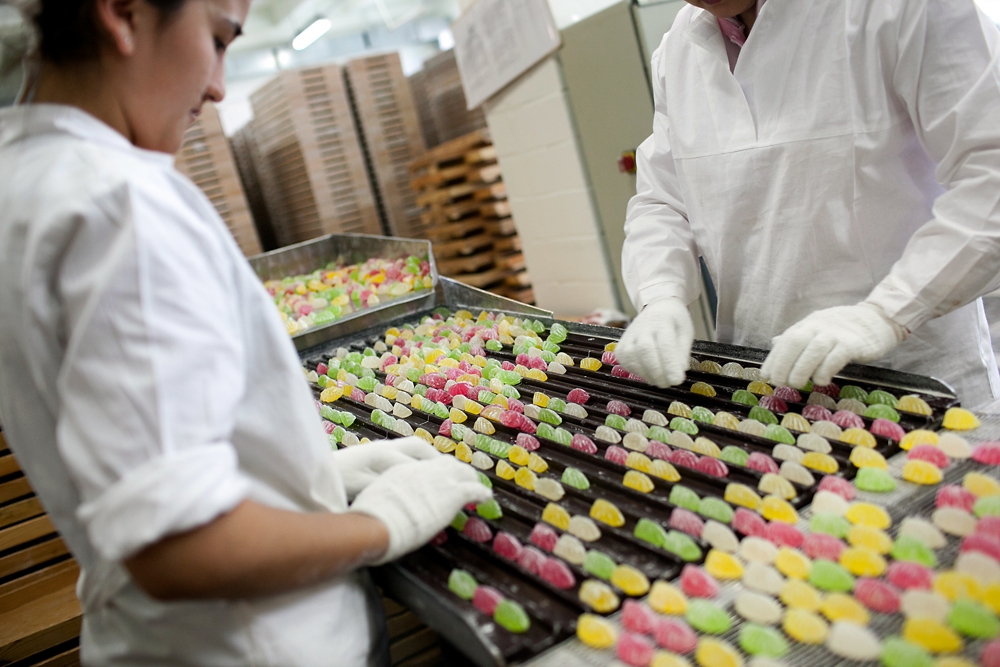 Although it employs around 4,000 people, Rakhat has the feel of a family business. 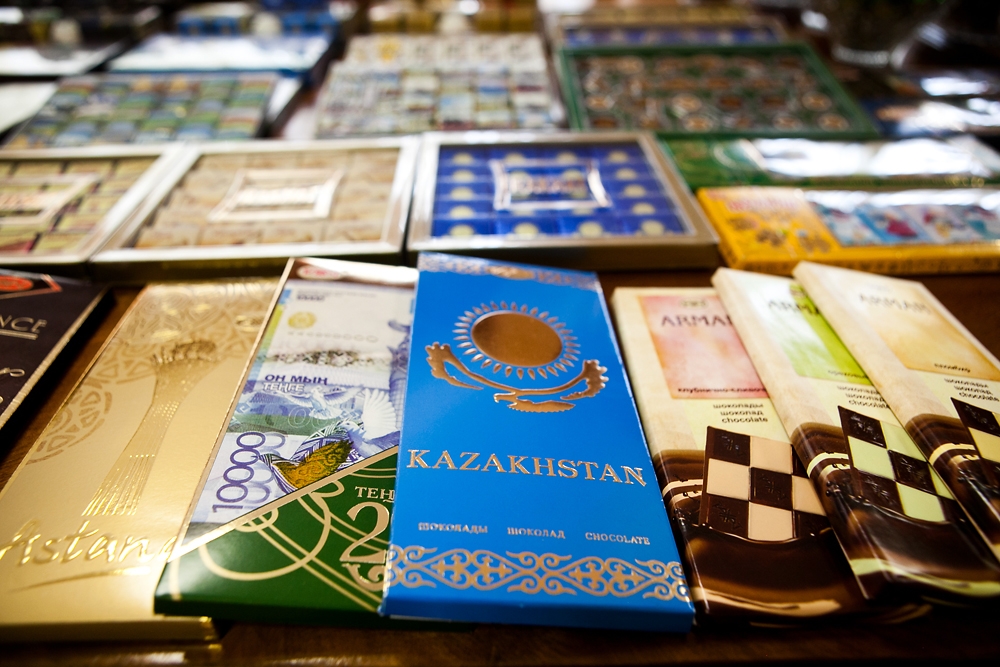 Rakhat’s best known brand is called simply Kazakhstan, a slab of milk chocolate in a wrapper the color of the Kazakh flag.
prev
next

On a factory floor in Kazakhstan’s commercial capital, Almaty, a machine squirts elegant swirls of rich brown chocolate into molds and the tray clatters down the production line. Caramel filling is piped in before it zooms onward for a topping of chocolate, then it is whisked off the conveyor belt by deft, white-gloved hands and stacked atop a towering pile of trays of finished chocolates awaiting packaging.

This is the Rakhat factory, where some of Kazakhstan’s best-loved chocolate is made – and far more besides. Colored jelly candies chug along another production line, waiting for a dusting of sugar before being spewed out into metal trays in a psychedelic blur. An automatic hotplate flicks out waffles at a dazzling speed, while another machine wraps candies with a flash of shiny paper.

Amid stiff competition from Russian rivals and global giants like Nestle and Mars, Rakhat – whose name derives from the Kazakh word for “pleasure” – has carved out a niche in Kazakhstan’s confectionary market. This is a business success story in a country whose economy is for many synonymous with oil and gas and little else. As a mark of its success, Rakhat’s director, Anatoliy Popelyushko, was ranked the country’s 29th most influential businessman last year by Forbes Kazakhstan.

This is just the type of business Astana is seeking to encourage as it promotes economic diversification to reduce Kazakhstan’s heavy dependence on the energy sector: Rakhat is a Kazakhstani firm with a steady track record and a solid local brand that can compete with global brands in a country where consumers often prefer imported goods.

Natalya Khilchuk, Rakhat’s chief production designer, says a personal touch is what keeps the company competitive. “Everything of ours is so individual,” she told EurasiaNet.org, brandishing a chocolate enthusiastically. “Every type of candy has its own life and its own history.”

She is sitting in the elegant degustation room above the factory at a long table piled with a dizzying array of confectionary. Rakhat produces over 300 different lines, with whimsical names like Makhabat (Love) and Arman (Dream) in Kazakh and Tayna (Secret) and Skazka (Fairytale) in Russian.

Rakhat’s best known brand is called simply Kazakhstan, a slab of milk chocolate in a sky-blue wrapper, the color of the Kazakh flag. Playing on the patriotic theme, the company has branched out into all things Kazakh: the yurt – the circular felt home of the nomads that is a national symbol – features strongly, with gift selections in yurt packaging and candies sold with mini decorative yurts as gimmicky gifts. Rakhat also produces chocolate apples, a nod to Almaty as the birthplace of the fruit.

Although it employs around 4,000 people, Rakhat has the feel of a family business. Khilchuk has 30 years’ experience under her belt there, and Popelyushko, the director, has headed the company since 1986. He owns 25 percent of the business, and Khilchuk owns 11 percent (the other main shareholders are an Almaty-based company called Sweet City and BD Associates, a UK-registered firm).

Rakhat prides itself on its “family dynasties” – several generations of one family that have worked together at the factory. One “dynasty” has had family members clocking in to work there for over 70 years, since its patriarch, Amre Berdybayev, joined in 1942.

That was the year this factory ended up in Kazakhstan due to a twist of fate, when – in the darkest days of World War II – the Kremlin relocated strategic industries from European parts of the Soviet Union in areas beyond the Urals to prevent them from falling into the hands of the advancing German army.

In 1942, two candy factories – Moscow’s historic Babayevskiy plant and one in Kharkov, Ukraine – were evacuated to the capital of the then-Soviet Republic of Kazakhstan, Alma-Ata. The two enterprises merged to become the Alma-Ata Candy Factory, which would spend the next three years supporting the war effort, sending chocolate to the frontline and to hospitals treating the wounded to keep up morale. To celebrate the war’s end, the factory called the first peacetime candy to roll off its production lines Pobeda, Russian for “victory.”

Since then the factory has weathered some tough times, including the economic slump that accompanied the Soviet collapse in 1991 and the 2008 global financial crisis that drove many Kazakhstani businesses into bankruptcy.

These days, its biggest challenge is stiff competition: Kazakhstan’s confectionary market is swamped with output from Russian companies, which benefit from trade privileges under the Customs Union of Belarus, Kazakhstan and Russia. Russian brands make up 80 percent of confectionary imports, Larisa Konstantinidi, president of the Kazakhstan Confectioners Association, said last year. Global giants like Nestle and Mars also have a strong presence.

Yet Rakhat is holding its ground, having made a net profit of nearly $10 million in 2011, the last year for which figures are available.

Kazakhstan has a sweet tooth: chocolate consumption stood at 7.75 kilograms per capita in 2011, on a par with consumption in a rich Western country like Finland. Research published in January suggested that Rakhat has a 20-percent share of the chocolate confectionary market.

Outside the factory, customers are drawn to Rakhat’s retail outlet by the rich aroma of chocolate wafting out over the streets. “It’s our natural chocolate and it’s the tastiest,” says one eager consumer, Kulash Sadvakasova. “You have to eat chocolate so your brain works!”

For some, Rakhat is simply the nostalgic taste of home. “My daughter lives in California, and she’s asked for Rakhat chocolates to be sent over there,” said shopper Gulya Khudaytkulova, who was standing in line to fulfill the request from overseas. “She really misses them!”