Kazakhstan: Theater with a Political Edge 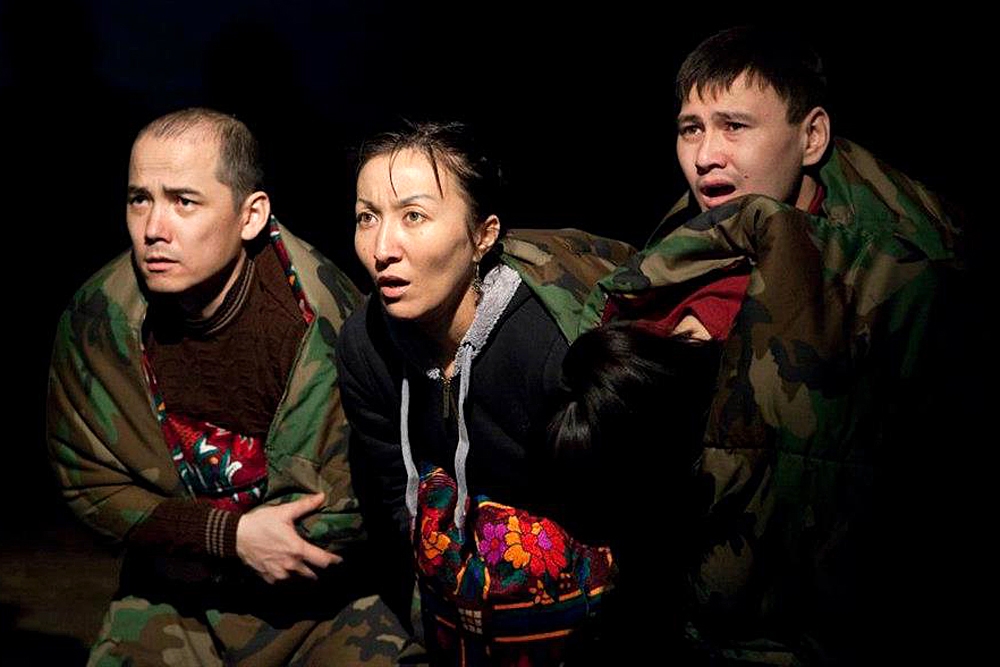 A group of villagers is held in thrall by omnipotent rulers, who warn that misfortune will befall the inhabitants if they defy authorities. And then, one day, the emperor is revealed to have no clothes.

On a recent Friday evening in Kazakhstan’s cultural capital, Almaty, a small audience was transfixed by the story unfolding on the stage in Avalanche, a play by Turkish playwright Tuncer Cücenoğlu.

Avalanche is a tale of a village whose inhabitants walk on eggshells because their rulers have convinced them that if they flout strict rules governing their everyday lives, they will spark an avalanche that will engulf them.

A childbirth breaks the spell: as the rulers order a woman buried alive for going into labor without authorization, the child is born. The commotion fails to bring down a disastrous avalanche, and the leaders are revealed to have lied and manipulated to keep the people in check.

The political parallels with Kazakhstan are unmistakable. A country led by an authoritarian president, Nursultan Nazarbayev, who has retained power for over two decades through methods that his critics say include sham elections, restrictions on political freedoms, and the silencing of dissent.

Airing this tale about the subjugation of personal and political freedoms to the whims of powerful rulers is provocative, and the Aksaray theater troupe performing the play has left no doubt that it is sending a political message. This is a play about how “fear does not let people fight for their rights,” Gulnar Amanzhanova, the troupe’s director, told the audience before the performance. “Maybe it’s necessary to get rid of that fear and fight for justice.”

Last spring the theater performed Avalanche to raise money for the victims of social unrest in the town of Zhanaozen in December 2011, when 15 people died after police opened fire on protestors in violence that shook Kazakhstan to the core.

Last summer the troupe performed Avalanche again to draw attention to the plight of its founder, 61-year-old Bolat Atabayev, then jailed on suspicion of helping to orchestrate the Zhanaozen violence.
Atabayev is now free, absolved of charges soon after Amnesty International declared him a prisoner of conscience  – but others, including opposition leader Vladimir Kozlov and dozens of inhabitants of Zhanaozen, are serving prison sentences on what their supporters maintain are politically motivated charges.

Aksaray – which is mainly a musical theater troupe – did not initially have a political message in mind when it staged Avalanche, which it performs in Kazakh, long before the Zhanaozen turmoil. After the violence, the play assumed a new significance, the performers say.

“Why did the show change after Zhanaozen? We started to perform it differently. The show took on an edge,” actor Asan Kirkabakov told EurasiaNet.org after a recent performance. “I feel that this is my civic position. I have to perform this; I have to get this across to my audience.”

By a quirk of fate, Avalanche was first staged using a state grant allocated to Aksaray. At that time, Amanzhanova said, the troupe’s main source of funding came from the financial patronage of Kazakh oligarch Mukhtar Ablyazov, a political foe of Nazarbayev’s who lives outside Kazakhstan. That funding has now dried up. Ablyazov is currently on the run from British justice, his whereabouts unknown since he fled the UK last year after a British court ordered him jailed for concealing his assets in a fraud case.

Ablyazov has also become tied up with the real-life drama played out in Kazakhstan over the Zhanaozen turmoil: Astana has accused him of bankrolling the unrest in a bid to overthrow the state, a charge he denies.

Using the arts to send political messages is nothing new, but in Kazakhstan the theater has more usually been utilized as a platform for promoting messages favorable to Astana than as a forum for airing messages critical of the Nazarbayev administration.

Productions at state-funded theaters, which receive generous arts subsidies, are often lavish affairs that – whether by accident or by design – feed subtly into Astana’s nation-building efforts, such as the popular showpiece opera about national hero Abylay Khan, the 18th-century warrior revered as the founder of Kazakh statehood.

Shows like this use feel-good historical stories to boost patriotic sentiments, but the theater has also been overtly used to foster loyalty to the modern-day politician who towers over Kazakhstan’s political stage: Two years ago a play called Deep Roots that lionized Nazarbayev in a mythologized version of his life was staged in Astana.

After the recent performance of Avalanche, the Aksaray actors held a question and answer session with the fascinated audience. They explained how they feel driven to perform a play. “Our job is to have an impact on [public] consciousness,” Almas Azhabayev explained.

In the aftermath of the Zhanaozen rioting, authorities have cracked down on dissent, resulting in the closure of Kazakhstan’s most vocal opposition party, Alga! and the shuttering of independent media outlets.

Are the actors not afraid of suffering retribution from the authorities, one member of the audience asked – a pertinent question given that many who voiced solidarity with the protestors in Zhanaozen later faced unpleasant consequences.