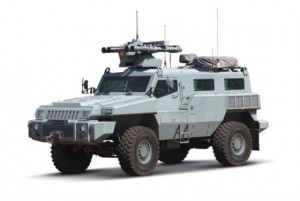 Kazakhstan will start assembling armored vehicles as part of a joint venture with a South African company soon, with a factory scheduled to be constructed in Astana by the end of this year, local media have reported. The vehicles, slated both for local use and for export, are the latest products in Kazakhstan's burgeoning defense industry.

The joint venture, Kazakhstan Paramount Engineering, was formed last year and will produce three types of vehicles: the mine-resistant armor-protected "Arlan," the armored police vehicle "Nomad," and the infantry fighting vehicle "Barys." (These are local variations of Paramount's Marauder, Maverick, and Mbombe, respectively.)

The construction facility, in Astana's Zhana Kala free trade zone, will be completed by the end of this year, according to a report on Kazakhstan's Radio Totchka, citing a Ministry of Defense official. It's not yet known when the first vehicles will be produced, but at the start they will be 30 percent locally sourced, and by 2018 that figure will rise to 50 percent, the report adds.

"The facility will crank out up to 360 vehicles a year beginning in late 2015. Kazakhstan said the plant should meet the bulk of its military-vehicle needs. Plans are for a sizable percentage of the output to be exported," the Astana Times reported earlier this summer.

A number of reports have suggested that Kazakhstan would be exporting the vehicles to Azerbaijan, Brazil, and Gabon, but that appears to be mistaken; those are the countries that currently operate the Paramount vehicles. Azerbaijan is already producing its own Marauder and Matador (an armored personnel carrier) under its own joint venture with Paramount.