Kazakhstan: Tokayev gets nod for presidential run in choreographed contest

The jailing of activists confirms Kazakhstan’s zero-tolerance attitude toward dissent during the political transition. 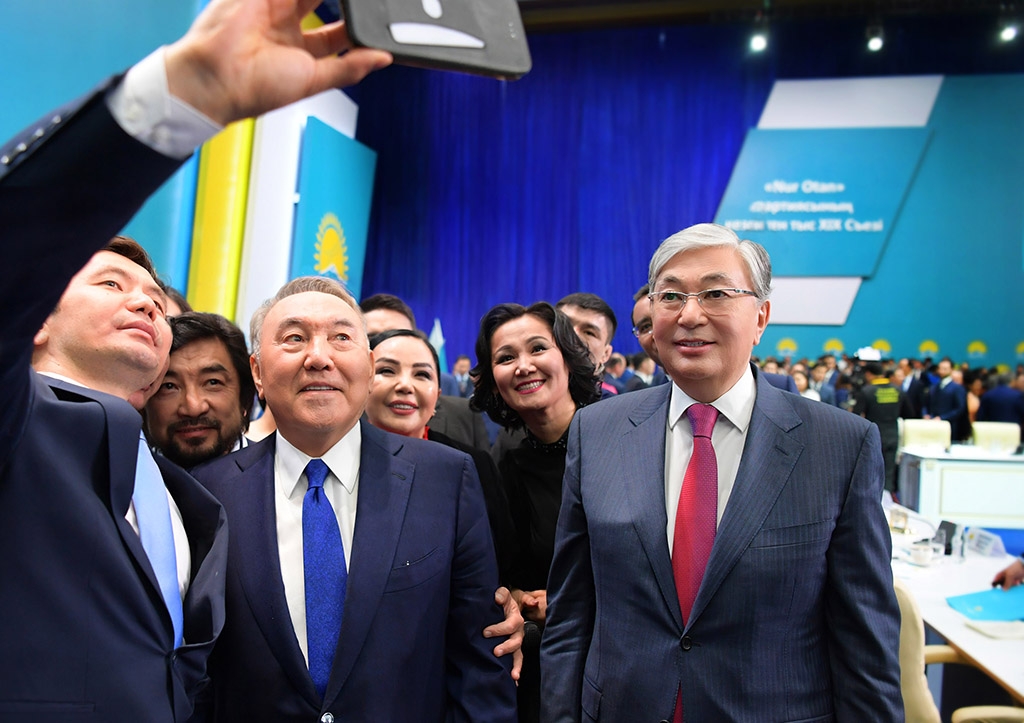 As marathon competitors raced along a street in Almaty on April 21, a pair of activists unfurled a banner bearing the words: “You cannot run from the truth” and the hashtags #forafairelection and #Ihaveachoice.

The call for a fair presidential election on June 9 was, however, too much for Kazakhstan's authorities to stomach. Asya Tulesova and Beibaris Tolymbekov were carted away by police and then handed two-week jail sentences for violating public assembly laws. Three people involved in filming the stunt were fined.

Elections in Kazakhstan are not about choice but choreography.

And there was a lot of that going on in Nur-Sultan – the new name for the capital city, formerly Astana – on April 23, as the ruling Nur Otan party convened a congress to anoint their candidate.

To nobody’s surprise, the pick was interim President Kassym-Jomart Tokayev, who has been doing the job since Nursultan Nazarbayev announced on March 19 to a shocked nation that he was stepping down after three decades in the saddle.

Nazarbayev was on hand at the congress to hand over the baton in person. When he named Tokayev, the hall broke into rapturous applause.

“For these long years he has been my faithful associate, and supported all my endeavors and initiatives. I have complete confidence in him, and consider him a worthy citizen for the leadership of the country,” Nazarbayev said.

True to form, delegates voted unanimously in favor. Sycophantic speeches then followed as one person after another fell over themselves hailing Nazarbayev's legacy and the choice of Tokayev to succeed him. The emeritus president nodded along as Tokayev sat with a ghost of a smile occasionally playing across his poker face.

Tokayev will be elected handily – there is little question about that. His only pro forma challengers will likely be no-name stalking horses whose only job is to add flavor to the simulacra of democratic procedure. Independent candidates are barred from standing.

In their bold gesture of defiance against this preordained program, Tulesova and Tolymbekov have spoken for many who are too nervous and afraid to speak out publicly against the artificiality of the ballot. The severity with which they have been treated has sparked outrage on social media, where most grumbling happens in Kazakhstan.

Vyacheslav Abramov, editor-in-chief of the Vlast.kz news site, tweeted that the pair’s blitz trial was “utter stupidity.” He pointed out that the activists had merely been calling for fair elections – something that Tokayev himself has pledged.

Underlining frustrations over the stage-managed political process, fliers have also begun appearing on Almaty’s streets with a black question mark and the query: “Do we have a choice?”

The jailing of the activists confirmed a zero-tolerance attitude toward dissent during the political transition. That was emphasized by the detention of people who held impromptu demos following Tokayev’s inauguration. Nazarbayev’s assurance during his nomination speech that Tokayev would observe basic civil rights could not have sounded more hollow.

Along with his official titles – First President and Yelbasy, Kazakh for “Leader of the Nation” – Nazarbayev wields considerable post-retirement powers and is micromanaging the succession process. Not for nothing has Tokayev been dubbed the “Nur-Candidate” by one wag on Twitter.

Chatter about the former president bequeathing his throne to his eldest daughter, Dariga Nazarbayeva, turned out to be hot air from analysts determined to see Kazakhstan join the club of family dynasties.

Since stepping into Nazarbayev’s shoes, Tokayev, a career diplomat and former prime minister, has adopted a markedly presidential mien. The state media machine is rebranding the bland functionary into a leader and trying to ensure the public acquaints itself with his still-unfamiliar face.

The 65-year-old has boosted his social media profile, tweeting and Instagramming frequently, albeit uninspiringly, about his assorted doings – be it talking security issues, meeting fellow heads of state or hanging out with Kazakh pop star Dimash Kudaibergen.

Populism is the order of the day. Tokayev has so far brought forward planned public-sector pay rises, ordered a drop in interest rates and claimed credit for the postponement of unpopular plans to build a ski resort at a beautiful spot near Almaty.

Of the seven registered political parties that are legally entitled to put forward a rival candidate, only two have done anything remotely resembling opposition politics. Azat has been a moribund force since leader Bolat Abilov bowed out of politics and is therefore unlikely to field a candidate.

The National Social Democratic Party of Kazakhstan, popularly known as OSDP, is also a spent quality, although it has said it will consider putting forward its candidate, journalist and government critic Yermurat Bapi, at its April 26 congress.

If Bapi were to get the green light from election administrators – which is far from certain seeing how the state favors excluding naysayers – Kazakhstan would experience its first presidential vote featuring a genuine opposition candidate since 2005.

The two parties that sit in parliament alongside Nur Otan, Ak Zhol and the Communist People’s Party of Kazakhstan – ersatz opposition forces that do not criticize the authorities – also plan to field candidates.

Officially approved public associations can also put candidates forward. On April 22, a total unknown called Sadybek Tugel, who belongs to something called the Eagles of the Great Steppe, became the first contender to submit registration papers.

Kazakhstan has never held an election deemed free and fair by credible international observers. Lack of choice, vote-rigging and the pervasive use of “administrative resources” are cited as the main problem areas.

Tokayev has already turned some voters off with his fawning over Nazarbayev and his highhanded proposal to rename the capital after his political master without public consultation.

Asked if she would vote for Tokayev after he called this election, one middle-aged voter in the city of Semey – also known as Semipalatinsk – pulled a face and snapped: “No!”

Others are happy to endorse Tokayev with their votes, trusting the political choice of the man who ruled them for the previous 30 years.

“If Nazarbayev trusts him, we should trust him,” Umit Zhospanbayeva, another Semey voter, told Eurasianet.