The comments were prompted by footage showing abuse of a prison inmate. 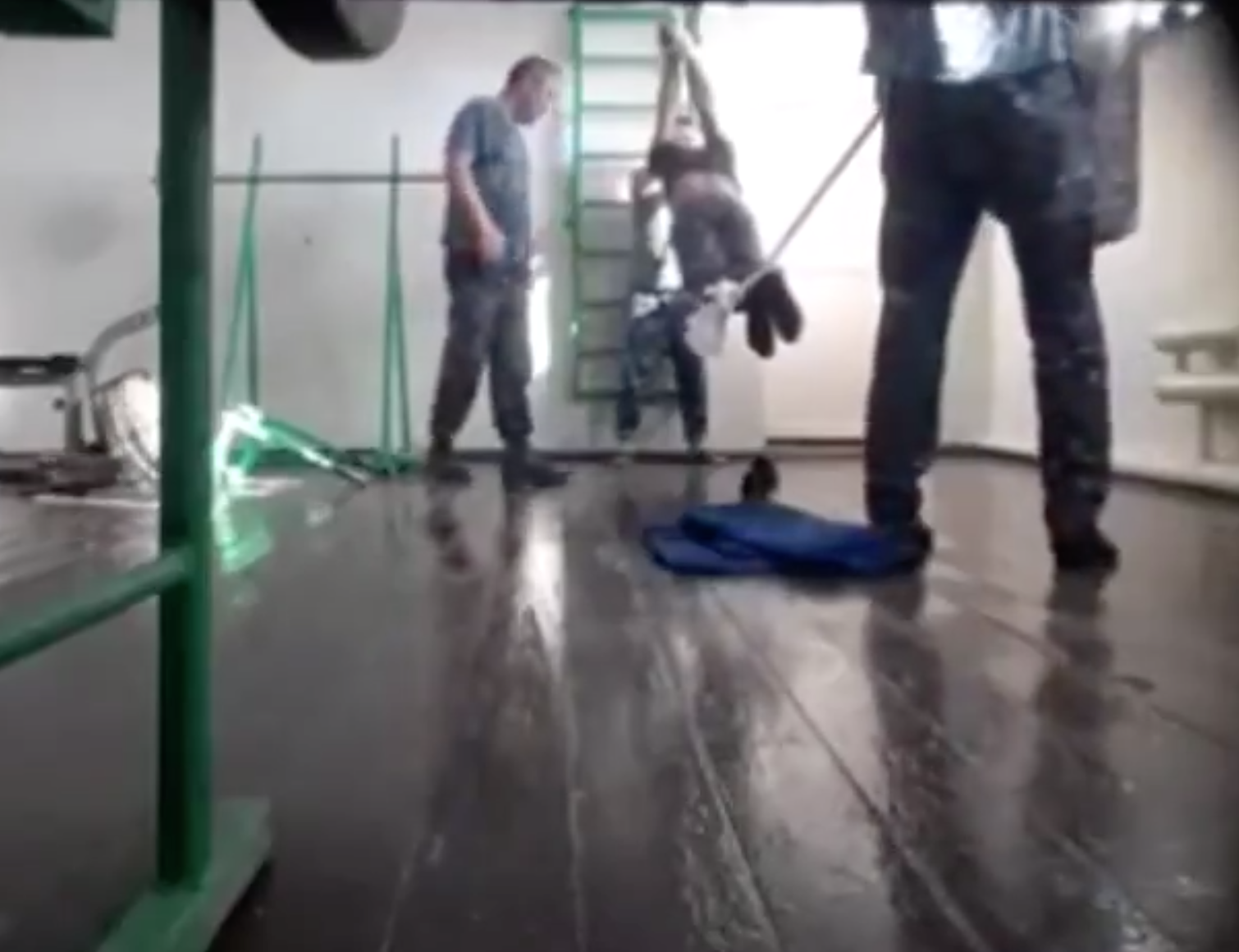 A screenshot taken from the video documenting the alleged torture at Zarechnoye prison.

The president of Kazakhstan has in a break from custom waded into a furor about torture in the nation’s prisons following the leak of footage showing inmates being mistreated by guards.

Taking to his official Twitter account on July 31, Kassym-Jomart Tokayev said he ordered prosecutors to conduct a thorough investigation into torture at a penal facility north of Almaty, where the images are said to have been filmed.

Five employees at the jail in Zarechnoye village have been detained and several dismissed, he wrote.

The Interior Ministry had been charged with modernizing the penal facility and “strengthening civilian control to prevent such incidents,” his tweet concluded.

The video, which surfaced on YouTube late last month, shows men in police fatigues deploying a painful stress position technique by suspending a man with his hands tied behind his back from gym equipment. This treatment was purportedly instigated by the prisoner’s appeal to the Prosecutor General to investigate prison abuse.

“Will you write?” one guard asks the prisoner.

“I won’t!” the prisoner responds after receiving several blows to the abdomen.

Several other similarly compromising videos have emerged from the same facility in recent days. In one, an inmate threatens to commit suicide over abuses, according to a report by RFE/RL’s Current Time strand.

These are far from isolated incidents at the Zarechnoye facility.

Last August, an inmate whose wife had alleged he had been subjected to torture died in the hospital one day before he was due to give testimony about his injuries. Prison officials said the man had injured himself falling from an object “30 centimeters from the ground.”

A few months later, a fellow prisoner who had testified about the same case was reported to have committed suicide.

Although allegations – and evidence – of systemic physical abuse in Kazakhstan’s prisons is nothing new, the president’s comments do mark a departure from the norm.

Vyacheslav Abramov, a former rights campaigner and founder of Vlast.kz news website, argued that Tokayev’s tweet was the first reference to torture ever made by a Kazakh head of state.

Yevgeniy Zhovtis, director of the Kazakhstan International Bureau for Human Rights and Rule of Law, shared this assessment. He told Eurasianet that under Tokayev’s predecessor, Nursultan Nazarbayev, discussions about torture were left to underlings.

By virtue of his station as head of the Senate, Tokayev was thrust into the top seat in March, following the surprise resignation of Nazarbayev, who had been in the post for almost three decades. Tokayev’s election win in June formalized his status, although the vote was met by an unusual level of protest activity and a concomitant police crackdown.

While Tokayev is widely seen as a loyal continuer of Nazarbayev’s legacy, there is some chatter among the commentariat about a possible rift on reforms and appointments.

Those watching the situation closely are picking up little clues. On July 29, the official website for Nazarbayev, who retains wide-ranging powers in his bespoke position as Leader of the Nation and head of the National Security Council, posted a statement about a meeting with Tokayev in which the pair discussed “the social and political situation … and the development of civil society.”

Tokayev’s office failed to return the compliment, perhaps, some might want to argue, subtly implying that although Nazarbayev is consulted, his views no longer carry such import. Even though the presence of the 79-year-old former president looms large, his 66-year-old successor may be trying to carve out his own profile and agenda.

Political commentator Dosym Satpayev has suggested Tokayev would like to position himself in the mold of Shavkat Mirziyoyev, his counterpart in Uzbekistan. While retaining a firm and unchallenged grip over the levers of power, Mirziyoyev has earned much praise for curbing his late predecessor’s authoritarian excesses. One way in which the Uzbek leader has scored points, both domestically and internationally, has been through his acknowledgement of torture within the system and his vows to eliminate it.

But Tokayev's space for maneuver is limited for as long as “the second president is under the strict control of the first,” Satpayev wrote on Facebook.