A new plant in the Atyrau province will provide work for more than 630 people. 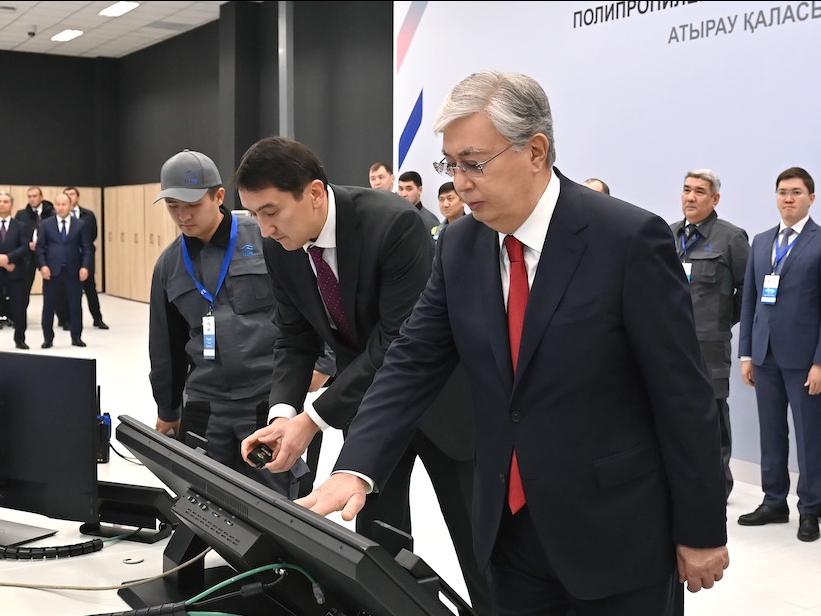 Cheer up: Tokayev at the opening of the Atyrau plant. (Photo: Akorda presidential administration)

The president of Kazakhstan traveled to the northwestern province of Atyrau on November 8 to open a major plastics-manufacturing plant in a bid to lend some vim to a largely unengaging presidential election campaign unfolding against the backdrop of a limping economy.

President Kassym-Jomart Tokayev talked up the new factory built by Kazakhstan Petrochemical Industries as a source of new jobs – more than 630 people will be employed there – and a boon for local manufacturers.

“This production complex will not only meet the demand for polypropylene in the domestic market, it will also promote the activities of small and medium-sized enterprises producing products out of polypropylene for the construction, medical, automotive and food industries," his office said in a statement.

Tokayev is on course to win the November 20 vote with ease since none of his five rivals have any significant public profile to speak of. Moreover, none of the candidates enjoy the luxury of being able to earn extensive and glowing coverage on state media for opening giant industrial plants.

There is little papering over the cracks of a disappointing economic performance, however.

Analysts polled by the Interfax-Kazakhstan news agency last month projected that year-on-year economic growth in the January-October period might land in the 2.5-3.5 percent range.

Those figures would be the envy of most countries in Europe or the United States, but the trend they point to is unnerving. As the World Bank has noted, where economic growth in the first half of this year reached 3.4 percent, that was markedly down from 4.1 percent seen over the same period in 2021.

And the biggest worry is rising prices, always a source of social tension. Annual inflation as recorded in September hit 17.7 percent, which was considerably higher than the authorities had expected.

In October, the central bank hiked interest rates from 14.5 percent to 16 percent, their highest level in six years, in a bid to curb that problem, which has been caused, in part, by an influx of Russians fleeing mobilization.

Opening high-tech plants is for Tokayev about more than just ginning up enthusiasm for the current state of the economy, though. He also wants to demonstrate that the country’s hydrocarbon reserves can be put to better and more profitable use than being sent overseas in its raw form, which accounts for most of the country’s export income.

The overwhelming size of the oil industry has come at the cost of suffocating prospects for diversification. Overreliance on oil has historically left Kazakhstan vulnerable to deep and sharp shocks entirely out of its control.

That was seen most vividly this year when the oil pipeline across southern Russia that Kazakhstan uses to export most of its crude to the world was repeatedly forced to limit its throughput. The slowdown of operations at the Caspian Pipeline Consortium was precipitated by purported damage to loading moorings at a port facility on Russia’s Black Sea coast. While Russia attributed the alleged damage to storms, some analysts have speculated that Moscow was trying to apply pressure to Kazakhstan for the latter’s perceived attempts to distance itself from Russia over the war in Ukraine.