Early results show the incumbent getting 81.3 percent of the vote against a field of no-name rivals. 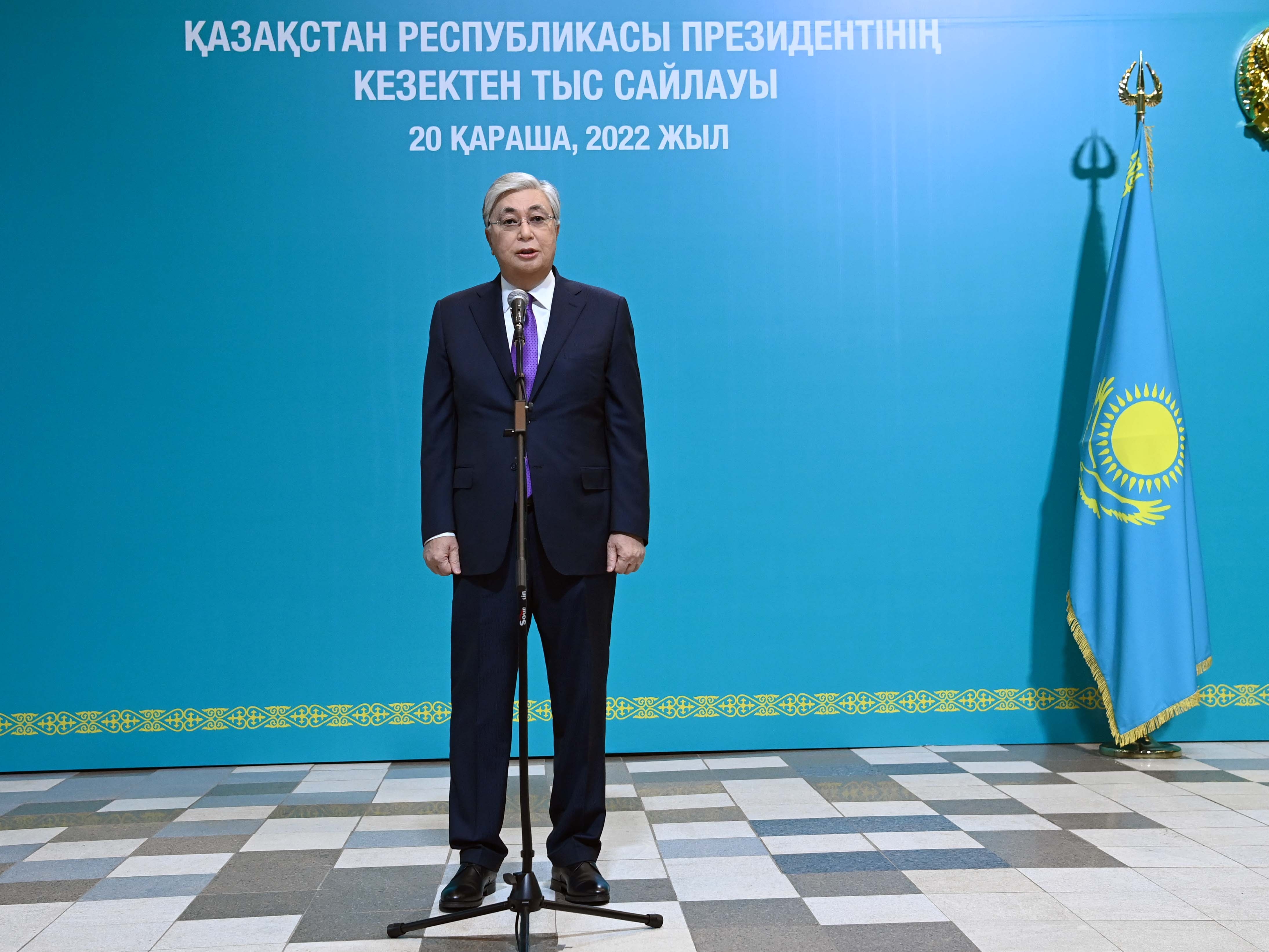 I did it my way: Tokayev speaking after casting his ballot. (Photo: Presidential administration)

Kazakhstan’s President Kassym-Jomart Tokayev has secured another term with ease, winning 81.3 percent of votes cast in the November 20 election, early results have shown.

Fully 5.8 percent of voters cast the ballot for the Against All option, while 68-year-old Zhiguli Dayrabayev, a member of the Auyl (Village) party, got 3.4 percent of the vote, numbers released on the morning of November 21 showed.

The result is ostensibly a boost for Tokayev, although this outcome was generally considered a foregone conclusion since none of his rival candidates had any public profile to speak of.

“I voted for Tokayev, because I didn’t know any of the others,” Yelena, a 50-year-old voter who only agreed to give her first name, told Eurasianet at an Almaty polling station. “I didn’t watch the debates. But he’s a good man, he’s trying to do something for the country, correct the mistakes.”

Correcting mistakes was the unspoken pitch of the Tokayev campaign. He came to power in 2019 after being handpicked as successor by the retiring President Nursultan Nazarbayev. That fact for many bound Tokayev’s brand with that of Nazarbayev, who retained considerable influence from behind the scenes.

This became a problem after the violent political unrest that spread through the country in the first days of 2022. Much of the anger seen on the streets at the time was directed at perceptions of a corrupt and crony-dominated system built and presided over by Nazarbayev.

So as to prove that he could serve as his own man, Tokayev on September 1 called the snap election that he has now won. Although Tokayev’s supporters sought to make the case that he was pursuing greater openness and democratization, analysts were immediately skeptical.

The fact that so little time was left between the announcement of the election and the vote itself – a problem in a political field devoid of viable actors, the result of decades of repression and co-optation – only added fuel to the argument that Tokayev was merely performing a tactical move.

Most people who voted for candidates that were not Tokayev will have done so full in the knowledge that it was a wasted ballot.

“I voted for Zhiguli, just for kicks,” Adil Baizakov, a 22-year-old travel agent in Almaty, told Eurasianet. “Me and my friends all did it. And why not? Let’s see how many ended up voting for him.”

Asel, a schoolteacher, picked Saltanat Tursynbekova, one of two women in the running.

“She is trying to do something to help women, trying to lower the pension age for women. I don’t think she will win. It was just symbolic support,” Asel, who gave only her first name, told Eurasianet.

Tokayev may have won a strong mandate, but under changes made to the law this year, he will only be permitted to serve a single, seven-year mandate. He has sold this feature as an important break with the past.

“I believe that seven years will be enough, because this is a long time in the life of any person. The most important thing is that there will be no monopoly on power in our country,” he said after voting.

As for Nazarbayev, 82, he made an appearance on voting day – a rare one since he doesn’t often show his face in public these days. After casting his ballot in Astana, a city whose name only a few weeks ago reverted back from Nur-Sultan, a visibly weary-looking Nazarbayev spoke to journalists about his lingering dismay over events in January, which the authorities have cast not as a show of popular discontent, but as a sinister plot hatched by treacherous insiders led by the former head of the security services, Karim Massimov.

“Massimov worked with me for many years. But how was I to know? Did Jesus Christ know about Judas who was sitting next to him?” Nazarbayev said of a man known widely as a dutiful loyalist. “Let’s wait until the end of the trial, and then we will all, I think, find out the truth.”

Many political observers are convinced, though, that Massimov may have been acting in league with members of Nazarbayev’s clan disgruntled at being edged out of power. The secretive treason trial against Massimov is unlikely to shed any truth on that theory.

With the conclusion of the perfunctory exercise of the presidential election, attention will now turn to parliamentary elections scheduled for the first half of 2023.

As things stand, only the ruling Amanat party (formerly Nur Otan) and a handful of government-loyal parties, some posing as opposition, are on the menu.

But Tokayev has vowed that a wider selection will be made available in time for the elections.

“New parties will be registered, this process is underway. We cannot artificially register parties, violating the law. Of course, we are creating favorable conditions,” he said. “I believe that before the start of the parliamentary elections, several parties will be able to fulfill the proper conditions and get registered.”

There continue to be strong signs, however, that only what have always euphemistically been dubbed “constructive critics” of the government will be allowed to enter the conversation.

On the day of the election, participants of a small protest picket in central Almaty from the Oyan, Qazaqstan (Wake Up Kazakhstan) movement were detained by police. A banner reading, "Will we live to see fair elections?" was quickly removed from the scene.