Kazakhstan: Too close for comfort in the age of coronavirus

Officials concede their exhortations to maintain social distance have had little impact. 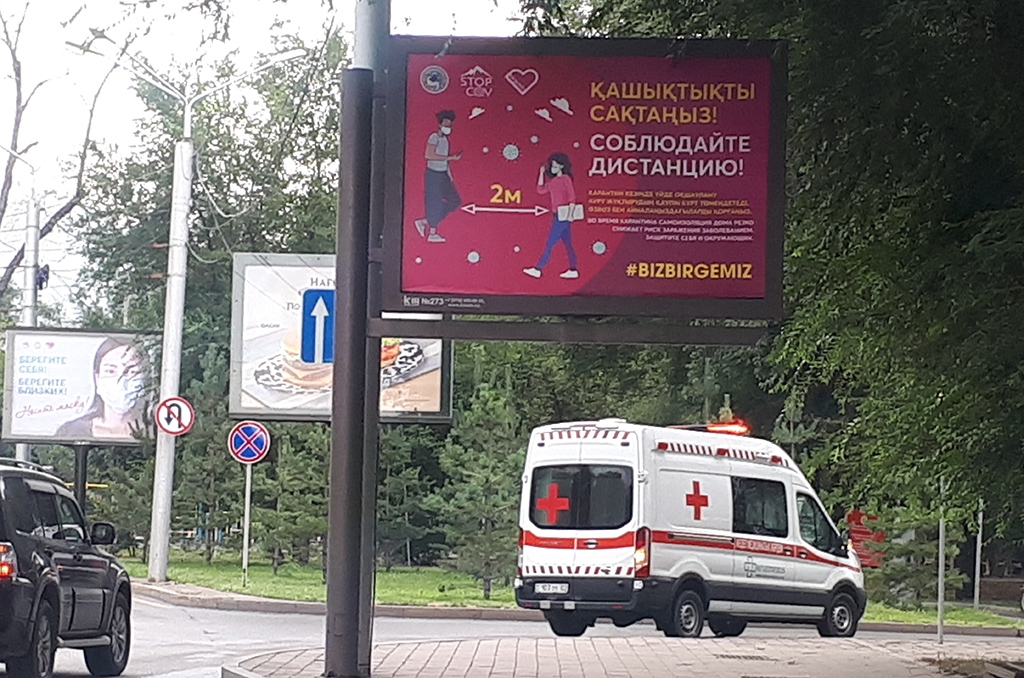 One afternoon in July, as medics battled to contain the wave of coronavirus infections washing through Kazakhstan, an ambulance screeched past a freshly minted billboard on an Almaty boulevard popular with pedestrians.

“Maintain your distance!” the eye-catching pink sign implored. The billboard illustrated the point with an image of two people separated by an arrow indicating a distance of two meters.

Few were heeding that entreaty.

Nobody moved aside even a few centimeters, let alone two meters, to create space as couples strolled past groups eating ice-cream on benches. Deliverymen weaved through on electric scooters, dodging teenagers zooming up and down on skateboards and children riding bicycles.

And this was happening just as Kazakhstan had imposed fresh lockdown restrictions to curb a surge in new coronavirus cases.

Recently surfaced video footage showing shoppers thronging a popular Almaty market has demonstrated how disregard for distancing guidelines may explain why confirmed cases of COVID-19 have risen by nearly 2,000 percent since the first lockdown was lifted in May. At last count, more than 103,000 Kazakhs are known to have contracted the virus

Traders running that offending section of the Barakholka market, which was allowed to open under lockdown restrictions, because unlike shopping malls, it is largely open-air, were fined $2,000. Punishments notwithstanding, many shops, bars and restaurants are making either token efforts to ensure distancing, or often none at all.

The reaction to the footage has been telling though. Many are incensed by safety-conscious critics rather than the reckless behavior.

“All of you moaning about violations of social distancing […] are scum!” ran one Instagram comment. “If you’re afraid of croaking, panting like a dog, stay at home.”

Officials concede their exhortations have had little impact.

“In Kazakhstan, unfortunately, social distancing is still little practiced,” the government’s National Center for Public Health said in written responses to Eurasianet about strategies it is using to communicate virus prevention messages.

The center, part of the Ministry of Health, is behind a new campaign that officials hope will capture the public imagination by harnessing culturally specific imagery to change ingrained behavior.

Galloping horses and golden eagles have appeared on billboards in Nur-Sultan, illustrating the two-meter distancing guideline via the length of the equine body and the size of the avian wingspan.

“The trusty steed and the predatory golden eagle are among the seven treasures prized by the Kazakh nomad,” the center said of the planned nationwide campaign. “Visual information presented in an unusual manner sends a ‘signal’ that we should all be responsible and remember how people should distance and how far apart.”

This is “a great example of how national symbols can be adapted to echo and amplify such an important message and measure such as physical distancing,” the WHO Country Office enthused in emailed comments to Eurasianet.

WHO country director Dr. Caroline Clarinval recently expressed alarm over disregard for distancing in Kazakhstan. In unusually outspoken comments, she professed herself “deeply concerned by public behavior” and noted the flouting of “precautionary measures, including physical distancing – especially in families.”

Officials in Kazakhstan are now wielding the carrot as well as the stick to discourage suspected super-spreading events, like the extended family feasts known as toi.

Another new information drive with a local slant is leveraging the theme of uyat (shame), which is customarily used by the censorious to condemn behavior deemed socially unacceptable.

In the coronavirus era, throwing a toi is the “new shame,” one video clip intones. “Think not only of yourself but of those around you,” it admonishes.

Consciously or otherwise, this is a nod to the behavioral principle of “social norming” – presenting desired conduct as the norm to encourage its adoption.

Framing messages like this can be effective, Joshua Liao, a U.S.-based physician who has written extensively about how behavioral science can help curb the coronavirus, told Eurasianet.

“It’s one thing to say we all have an individual responsibility to do x or y, or to not do z,” he explained. “It’s another thing to say: everyone in your community is doing this.”

Although if virtually everybody is visibly doing the opposite of the desired conduct, changing behavior will be more challenging, even with more imaginative advertising campaigns.

Powerful messages about maintaining physical distancing have hitherto been absent from coronavirus awareness drives, which have instead comprised primarily anodyne messages about avoiding crowded places and observing good hygiene.

Recently, more dynamic efforts have been made to promote the wearing of facemasks in line with new rules making this obligatory in public places. Almaty is plastered with billboards shouting slogans like “Wear a mask! Stop the virus!” “Wear a mask! Protect yourself! Protect your near and dear!”

Breaking the rule incurs a $200 fine. But enforcement is rare, and the frequent sight of mask-less people passing by these billboards raises questions about the effectiveness of government messaging.

Clarity is key to getting the message across, experts say. “These rules should be very well-defined so that the population can follow the rules,” Gaukhar Mergenova, an Almaty-based public health consultant, told Eurasianet.

But the government’s masking up messaging has been garbled.

It was recently forced to backtrack on a claim by a top public health official that a written rule existed requiring masks be worn outdoors. In actual fact, a patchily enforced regulation in place since March only made masks obligatory in indoor settings like shops and public transport.

After officials had hastily rewritten the regulations to make facemasks compulsory outdoors, Aleksei Tsoi, the health minister, further muddled the message by adding ad hoc exceptions, such as allowing people exercising rather than simply walking on the streets to forgo masks.

Critics saw the communication debacle as another example of the kind of bungling that has undermined government credibility and eroded public trust.

One poll showed that 61 percent of citizens believe the risks of COVID-19 are exaggerated. Conspiracy theories peddled by Instagram celebrities have gained currency.

Effective communication “depends on how the government understands the population,” Mergenova points out.

Countries that invest efforts into studying the public mood “have instruments to collect data, analyze and inform the policy messaging tools,” she said. “In Kazakhstan, to be honest, I don’t know how many instruments we have.”