The state’s taboo on addressing ethnic tensions has allowed them to fester. 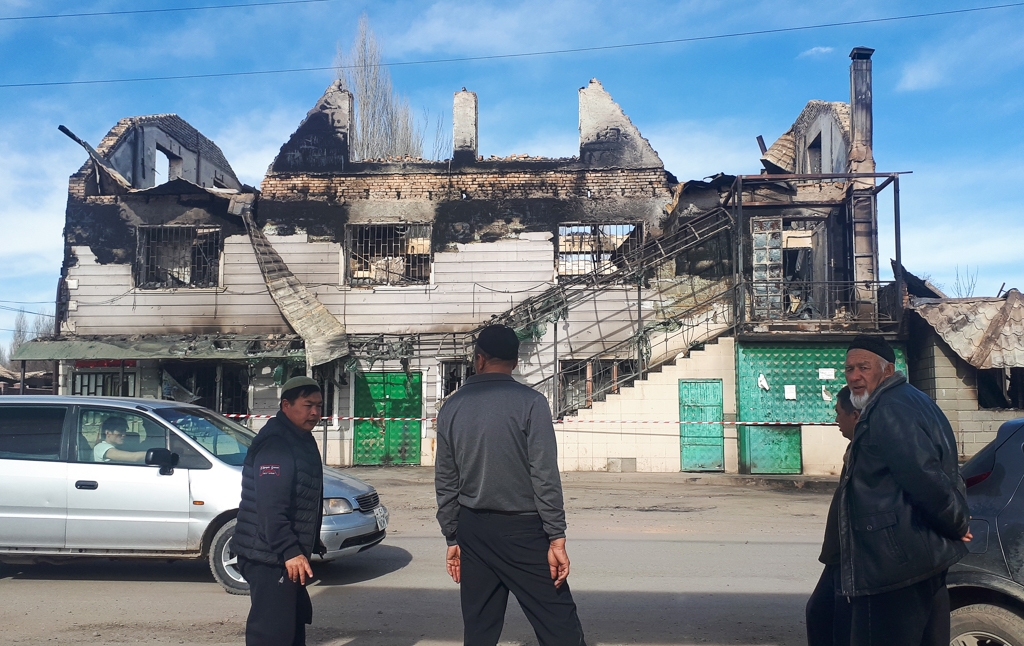 When Kazakhstan suffered its deadliest ever bout of intercommunal violence last year, President Kassym-Jomart Tokayev made two pledges to a stunned country that prides itself on being a sanctuary of ethnic harmony.

Justice would be done, he said. And the root causes behind the shooting and pillaging last February that left 10 dead in villages inhabited by the Dungan minority in southeast Kazakhstan would be brought to light.

By that standard, the mass trial that concluded on April 27 has proven a major disappointment.

Representatives of the Dungan community argue they have been disproportionately and unfairly punished for violence that was targeted at them. Nine of those killed were Dungans. Dozens of Dungan homes and businesses were destroyed.

Neither has that clarity sought by Tokayev been attained, critics of the trial are arguing.

A pivotal question on that point was posed most forcefully by defense lawyer Bolatbek Omarov.

“Why in the 21st century, in civilized Kazakhstan, did bestial instincts awake in some citizens and why, in defiance of the law, did they vent their rage on peaceful people guilty of nothing?” Omarov asked the court.

The composition of the defendants in the dock tells its own story.

Of the 51 accused, 37 were Kazakhs and 14 Dungan. Nineteen from this group, five of them Dungan, received prison terms of between five and 20 years. One Dungan was acquitted, while the remainder received suspended and restricted-freedom sentences.

That picture does not adequately represent the reality of what happened, say Dungans, who were in effect subjected to a latter-day pogrom.

“This is not justice. This is a circus,” said Mukharme Daurov, whose son Ersa received a 16-year sentence on charges of attempting to kill police officers. “He went out to protect his home and his family, and he has been convicted.”

Omarov’s argument in court was that his clients had only been exercising their legitimate right to self-defense after police failed to protect them from mob attacks against the Dungan community, a minority of Mandarin-speaking Muslims of Chinese ancestry who fled to Central Asia 140 years ago.

“It was not they who attacked those villages, burned down houses and killed people. On the contrary, they were saving people and protecting themselves,” Omarov told Eurasianet. “They were doing the work of the police.”

Police have said they were overwhelmed by the sheer scale of the unrest, which involved thousands. But the trial largely sidestepped that important mitigating detail.

The immediate cause of the bloodletting in and around the village of Masanchi was not disputed in court. All sides broadly agree that the unrest was sparked by a petty traffic dispute between a Dungan family and a Kazakh family.

Two Dungans involved in that fracas, which ended with an elderly Kazakh man needing hospitalization for a broken rib, got prison time in April 2020.

That incident might have been the end of things had it not been for the incendiary messages that whirled across social media and through messaging apps. The story being told on those platforms was grislier. The old man, some messages claimed, had been murdered.

Thousands of Kazakhs converged on the area from surrounding villages and further afield. Rabbles tore through four settlements, beating and shooting at Dungans along the way, and setting houses and businesses alight.

The vast majority got off scot-free, even though many could be clearly identified in video footage displayed in court. So have most of those who circulated messages containing ethnic slurs and incitements to violence.

“The organizers of this tragedy are not being brought to book,” Khusey Daurov, president of the Association of Dungans of Kazakhstan, who was himself injured in the unrest, told Eurasianet. “It’s those who fell for those provocations who are on trial – cannon fodder.”

A sense of impunity may encourage a repeat performance, in Masanchi or elsewhere, warned Daurov (no relation to the convicted man Ersa Daurov).

In the immediate wake of the bloodshed, conspiracy theories spread suggesting that the violence might actually have had its roots in some murky score-settling among organized crime operating along the border with nearby Kyrgyzstan.

This notion was seemingly disabused in this and an earlier trial.

“We went […] not with the aim of stealing and looting. We just watched clips on social networks, sympathized with the Kazakhs and wanted to help,” said one Kazakh convicted last year in a trial that culminated with seven receiving prison sentences. Four terms were later commuted to restricted freedom.

The nakedly ethnic dimension of the Masanchi unrest is a deeply uncomfortable fact for the state, which has spent decades pushing the idea of Kazakhstan as a land untroubled by intercommunal tensions.

There is also a political angle to all this, since the narrative about Kazakhstan’s many dozens of ethnic communities living peacefully side by side is routinely cast as the enduring legacy of former President Nursultan Nazarbayev, who continues to play an important role in running the country.

But recurrent episodes of ethnically tinged violence, which typically occur when localized squabbles play out along ethnic fault lines, spoil that rosy picture. On such occasions, complaints muttered by Kazakhs about minorities getting “cocky” or “audacious” highlight the sense that Kazakhs feel they are first among equals in Kazakhstan – a notion that minorities resent.

The government trumpets “wonderful slogans” about ethnic unity but they ring hollow as it fails to dream up a national ideology “comprehensible to all and that unites all Kazakhstanis,” Satpayev told Eurasianet.

Frustrations over poverty, inequality and corruption create a fertile breeding ground for tensions, so small incidents can trigger violence, including with an ethnic dimension, he suggested.

And the taboo on airing ethnic tensions simply allows them to fester, said Daurov, of the Association of Dungans

“However harsh the truth is, no matter how unpleasant it is, the truth must be spoken to resolve things correctly,” he said. “If you hush these problems up, they will, on the contrary, simply get worse.”