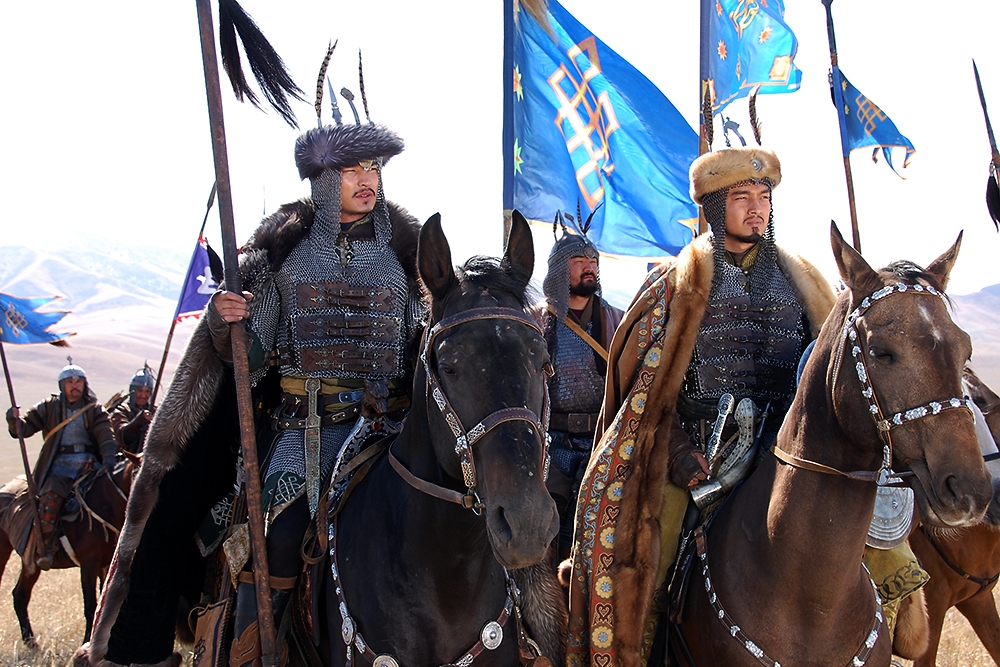 The Kazakh-made TV series – called Kazakh Khanate – dramatizes the tumultuous events leading up to the creation of the first Kazakh state in 1465 amid the collapse of the Mongolian-ruled Golden Horde. (Photo: Kazakfilm)

Armor-clad warriors surge out from behind a rocky outcrop and gallop across the steppe amid a thunder of hooves, banners flapping in the breeze and swords aloft. Emitting furious war cries, they descend on an encampment and – with a clash of swords – a pitched battle ensues.

Perched on a rise above the skirmish, a female warrior in an elaborate fur headdress checks her smartphone as an impassive white camel chews the cud.

This is not a medieval war zone, but the set of a Game of Thrones-style TV series that aims to bring to life the colorful historical tale of the birth of a Kazakh state over half a millennium ago.

The series dramatizes the tumultuous events leading up to the creation of the first Kazakh khanate in 1465, amid the collapse of the Mongolian-ruled Golden Horde empire – events interpreted in modern-day Kazakhstan as laying the foundations for today’s independent state.

The 10-part historical epic is being made by acclaimed director Rustem Abdrashev, a man on a mission when it comes to cinematic interpretations of Kazakhstan’s past.

“The history of my country and the history of my people and how it was born isn’t simply important but also topical,” he told EurasiaNet.org, as darkness fell on the set at the end of a long day’s filming in picturesque landscapes near the Kapshagay reservoir in southeastern Kazakhstan in December.

“For the next generation, this will be a good example for imitation and for awareness.”

Dubbed “Kazakh Khanate,” the series recounts how two leaders, Zhanibek and Kerey, broke away from an Uzbek-ruled kingdom to found a khanate on the steppes of southern Kazakhstan.

“They decide: we’re announcing from this day on that we’re the Kazakh khanate, and they send riders out all over [to spread the news]!” producer Arman Asenov told EurasiaNet.org, describing with a flourish the climax to the series.

This narrative has become familiar to the Kazakhstani audience following statehood celebrations in 2015 to mark the 550th anniversary of the khanate’s foundation. The festivities were designed – as President Nursultan Nazarbayev put it – to showcase Kazakhstan’s “long history.”

The celebrations themselves and the filming of the series may not have happened at all without intervention from an unlikely source. Interest was piqued after Russian President Vladimir Putin airily dismissed Kazakhstan’s statehood as a recent phenomenon just a couple of decades old. The colonial overtones of the remarks outraged many in Kazakhstan.

“Remember when Putin declared that Kazakhstan was a country that had no history? It probably strongly spurred us on,” explained Asenov.

“[Kazakh statehood] really did start in 1465… and then they start saying there was no state!” the burly, bearded producer concluded with a guffaw.

The statehood celebrations, announced soon after Putin’s faux pas, became an exercise in nation-building for Kazakhstan. It was also an opportunity to bolster support for its 75-year-old president, who has ruled since independence a quarter of a century ago.

Astana has long used the silver screen “to depict and create certain symbols of nationhood and history that are supposed to influence how people perceive themselves as being Kazakh and their history and their past,” says Rico Isaacs of Oxford Brookes University, an expert on Kazakhstan who has studied Astana’s harnessing of film in nation-building efforts.

Bearing this out, Nazarbayev is credited in the Kazakh Khanate trailer as the ideological inspiration. His youngest daughter, Aliya, almost starred in the show until a scheduling clash prevented her.

The series raises questions about historical accuracy: it tells a tale critics dismiss as self-serving historical myth-making about a khanate that only existed as a loose unifying entity rather than an actual state.

Abdrashev is sanguine about such sniping. The show is, he acknowledged with a smile, “definitely an image-making project” for both Kazakhstan and Nazarbayev, whose life the moviemaker has already taken to the silver screen with a thoughtful series of films called Path of the Leader.

“History is extremely complicated and subjective,” he said with a shrug. “But aside from history, we’re making movies, and this should be an artistic production. The priority isn’t to distort history, but to tell an interesting story.”

After the release of the TV series, which was filmed in Kazakh and will also be dubbed into Russian, the filmmakers plan to release a feature film in multiple languages, including English, Turkish and Chinese.

They hope it will help promote Kazakhstan’s soft power internationally in the manner of previous movie extravaganzas released abroad like Nomad and Myn Bala. (To Astana’s chagrin, however, the decade-old Borat film lampooning a fictional Kazakhstan remains better known to western film fans.)

Exploring Kazakhstan’s past on screen is nothing new for Abdrashev, who has directed critically acclaimed movies such as The Gift to Stalin, tackling the fallout of the Soviet atomic program, and Rebirth Island, examining the origins of the Aral Sea environmental disaster.

Kazakhstan’s moviemakers should be reinterpreting a colonial past dominated by Russian narratives, said Abdrashev, who was born in the Soviet Union in 1970 and grew up during the Brezhnev era of stagnation. “Unfortunately, for 70 years we lived with a distorted knowledge of our own history, and we're now trying to catch up and set the record straight.”

Arts projects offering fresh ideological interpretations of history have the official stamp of approval. Made by the state-run Kazakfilm studio, the series is financed from government coffers.

However, with an economic crisis forcing cuts to public spending, the moviemakers are tightening their belts. Astana is now covering only three-quarters of the 2 billion tenge (around $5.5 million at the current rate) budget, leaving them scrambling to make up the shortfall through private investment and crowd-funding.

Kazakh Khanate looks set to entrance viewers when it hits TV screens in March, with its Game of Thrones-style themes of power and glory, war and peace, love and hate – all set against the sumptuous mountain-and-steppe scenery of southern Kazakhstan.

Like Game of Thrones, it tells a dramatic “parallel tale of the history of many people,” said Asenov. But unlike the popular TV series, set in mythical kingdoms populated by dragons and zombies, “we have a real story to tell.”