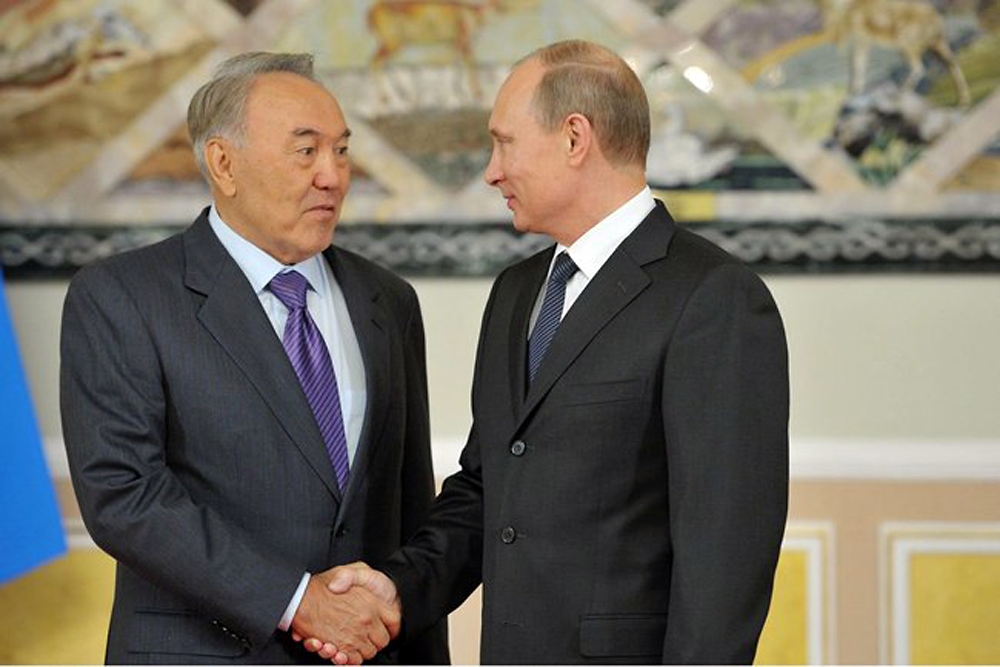 The Crimea crisis is putting pressure on Kazakhstan’s long-standing, multi-vectored foreign policy, which has sought to balance the competing interests of Russia, China and the United States in Central Asia. In forcefully backing Russia’s annexation of Crimea, many in Kazakhstan worry that President Nursultan Nazarbayev could be setting himself up for separatist woes of his own.

At the Nuclear Security Summit on March 25 in The Hague, Nazarbayev jumped off the diplomatic fence to offer strong support for Russia’s leader, Vladimir Putin, the architect of the Crimean land-grab. Nazarbayev essentially blamed Ukraine’s new leaders for precipitating the crisis, saying that “an unconstitutional coup d’etat” had occurred in Kyiv. He also noted there had been “discrimination against minority rights” in Ukraine, thus providing diplomatic cover for Russia’s position that it intervened to protect Russians in Crimea.

The occasion marked Kyiv’s second protest within a week: on March 20 it complained about Astana’s recognition of the March 16 Crimean referendum, which Russia proceeded to use as justification of its annexation of the peninsula. On March 27, Kazakhstan abstained in a vote against a UN resolution declaring the plebiscite invalid.

The crisis is placing considerable strain on Nazarbayev’s “multi-vector” approach, which is premised on the maintenance of good relations with all powers. The policy, along with an abundance of natural resources, has raised Kazakhstan’s international profile during the post-Soviet era. Nazarbayev’s recent statements, however, are leading Kazakhstan into a “political and diplomatic blind alley,” cautioned opposition leader Amirzhan Kosanov.

“Kazakhstan has basically lost its independence in assessing events taking place in the world and, wittingly or unwittingly, is becoming hostage to the foreign policy pursued by the Kremlin,” Kosanov told EurasiaNet.org.

Kosanov is far from the only one worried. Kazakhstan’s pro-Russian stance is causing widespread consternation at home, where critics fret that Putin’s doctrine of intervening to protect Russian speakers in Crimea could eventually be applied to Kazakhstan – albeit in circumstances currently unimaginable, since Astana and Moscow are close allies and Russian speakers’ rights are guaranteed. Northern Kazakhstan is home to a sizable Russian minority.

The similarities between Kazakhstan and Ukraine are blinding: both are post-Soviet states sharing long borders with Russia, with large ethnic Russian minorities (22 percent of the population in Kazakhstan’s case).

“Kazakhstan’s position is dictated not so much by creed as by fear… Events in Crimea are a possible scenario for Kazakhstan too,” Almaty-based analyst Aidos Sarym told EurasiaNet.org.

Hyperbolic headlines splashed across Kazakhstan’s press illustrate the apprehensions. “Is Kazakhstan Threatened With Occupation Tomorrow?” thundered the Assandi Times. “Is Kazakhstan Being Dragged Into Someone Else’s War?” wondered Adam Bol magazine.
“Supporting the precedent of the actual annexation of Crimea from sovereign Ukraine, Akorda [the presidential administration] is itself encouraging possible separatist sentiments within the country,” said Kosanov.

Dosym Satpayev, director of the Almaty-based Risks Assessment Group think tank, suggested that Nazarbayev’s backing of Russia over Ukraine may represent what he sees as the lesser of two evils: for the 73-year-old president, in power for over two decades, his fear of domestic dissent seems to be overwhelming any concern that “separatist sentiments could be possible in Kazakhstan itself.”

“That means fears of revolutions and coups turned out to be higher for Kazakhstan’s leadership than fear of the threat of separatism,” he told EurasiaNet.org.

Unfazed by Nazarbayev’s pro-Kremlin stance, Western leaders including US President Barack Obama, UK Prime Minister David Cameron, and French President Francois Hollande lined up to meet him in The Hague. This suggests that Kazakhstan still retains lots of diplomatic wiggle room to get back squarely on a multi-vector track. As well as eyeing Kazakhstan’s oil and gas reserves, Western leaders may be hoping the veteran Kazakhstani leader can exert a behind-the-scenes, calming influence on the irascible Putin.

In a nod to Western sentiment and Kyiv’s sensibilities, Astana has mixed pro-Russian pronouncements with statements on the need to uphold Ukraine’s sovereignty, performing what Sarym calls a “verbal balancing act.”

Nazarbayev has consistently made clear that, multi-vector policy notwithstanding, he considers Russia to be Kazakhstan’s main geostrategic ally. Beyond the politics of such a position lie glaring economic realities. Russia is Kazakhstan’s largest trading partner, last year accounting for 36 percent of imports worth $17.6 billion and 7 percent of exports worth $5.8 billion. The trade balance may be in Russia’s favor, but – crucially for Kazakhstan – while most trading partners buy oil, Russia is a major consumer of non-oil exports.

Kazakhstan is also tied into economic cooperation with Russia through their membership of the Customs Union, a trilateral free trade zone with Belarus which is due to sign an agreement in May to expand into the Eurasian Economic Union from 2015.

For Putin, Ukraine’s tilt westward has infused his Eurasian Union vision with even greater political significance. Nazarbayev is a strong backer of Eurasian integration (he first proposed the idea of a Eurasian Union in 1994) – but he nowadays views the political element of integration with suspicion. In The Hague he took pains to stress that Kazakhstan has a “purely pragmatic economic interest” in the union, which, as he pointed out, allows his landlocked country tariff-free access to the Black Sea through Russia.

Furthermore, it should not be forgotten that, in addition to political and economic factors, there is a “mental factor” contributing Kazakhstan’s support for Russia, suggests Sarym: many in the Astana political elite (including Nazarbayev) have held top posts since the Soviet era, and in their worldview, “Moscow is the center of the world and the Kremlin is a cultural mecca.”