Russia’s war is the backdrop for many personal life decisions these days. 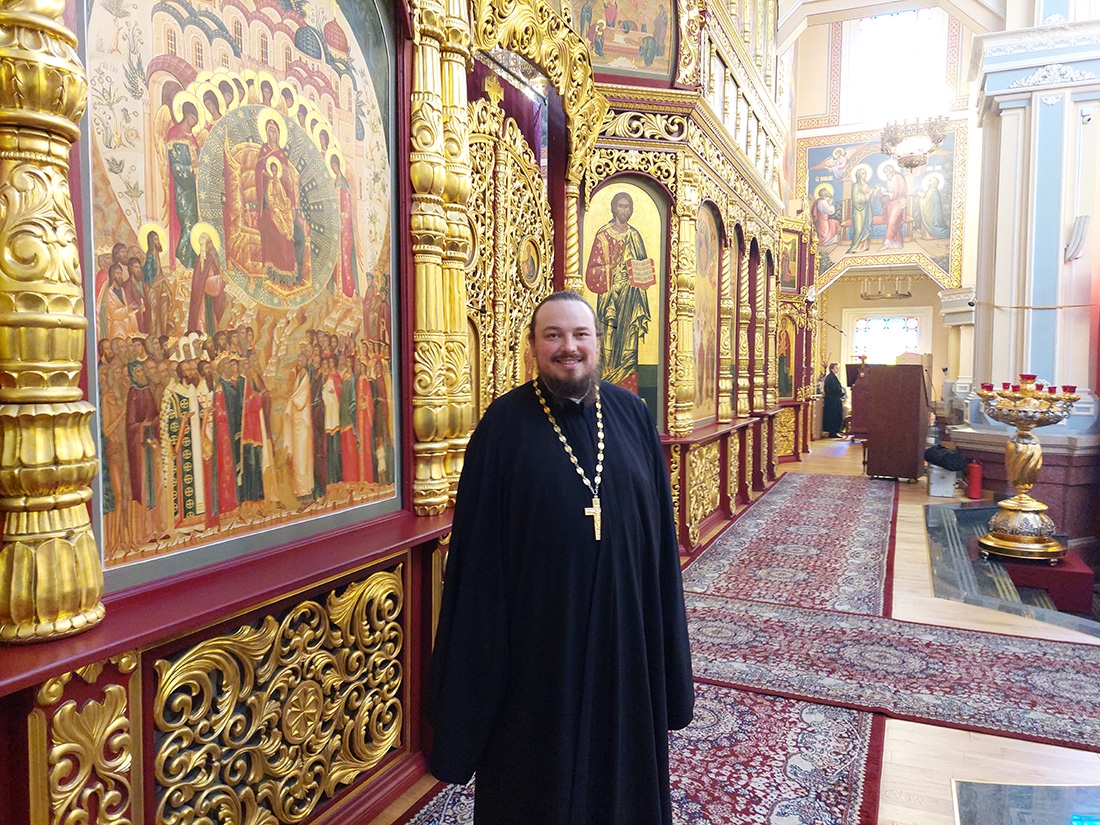 Father Yakov is teaching himself Kazakh by reading psalms and other passages from the Bible. (photos by Daniyar Moldabekov)

During the service at Almaty’s Ascension Cathedral, strains of Church Slavic rise from the choir. “Lord have mercy,” they sing in the proto-Russian language still used in the Orthodox Church.

As the congregation disperses, parishioners chat among themselves, in Russian as always, the language almost universally spoken by Slavic communities in Kazakhstan’s cities. But if Father Yakov Voronstov, 36, has his way, that may change.

Like many mother-tongue speakers of Russian in Kazakhstan, Father Yakov studied Kazakh at school and university, albeit in a largely desultory fashion since he saw little likelihood of using the language in daily life. Everything changed on February 24, the day that Russia began its invasion of Ukraine.

“February 24 was a massive blow. As a Russian, as a person with a good grounding in Russian literature and as somebody who has taught Russian philosophy in a seminary for four years, I was alive to the dangers of philosophical myths and imperial fantasies,” he told Eurasianet. “This monstrosity lived somewhere deep within the Russian worldview. And here it was taking shape. And I saw in this a threat for myself and my native land: Kazakhstan.”

Father Yakov said the war has not quashed his love for the classics of Russian literature, but he resolved to renounce anything that smacked of chauvinism and militarism.

“I am a Kazakhstani and I will speak Kazakh," he told Eurasianet over a coffee in a cafe near the Ascension Cathedral.

These days, Father Yakov peppers his Facebook status updates with biblical quotations in Kazakh. He teaches himself the language by reading psalms and other passages from the Bible.

For Kazakh to gain a deeper hold across the country, however, there will be some uphill climbing to do.

In a 2020 survey of 1,600 people conducted by the Friedrich-Ebert-Stiftung foundation, a German government-funded research group, 35.1 percent of respondents stated that they spoke Kazakh at home. Fully 30.5 percent said they spoke Russian, while 25.8 percent said they used both languages.

The war in Ukraine is triggering a noticeable shift. Qazaq Grammar, an Instagram-centered project that aims to popularize Kazakh language and culture, has added 5,000 subscribers since the outset of the invasion.

“When the Russian invasion began, I started noticing various posts, tweets, [Instagram] stories from young people about how that was the moment that they began to write and talk only in Kazakh, or at least to start studying it,” Nursultan Bagidolla, one of the creators of the Qazaq Grammar initiative, told news outlet Mediazona. “At first it was kind of annoying and offensive that the reason for this interest in Kazakh was because of the war. But looking at this situation, I just have to say thank you. The war has had a wake-up effect on Kazakh national self-consciousness.”

Russia’s war is in the background of many personal life decisions these days.

Aleksei Skalozubov, an ethnic Russian and a native of the largely Russian-speaking Akmola region, filmed and uploaded a video appeal after the invasion began.

“My name is Aleksei,” Skalozubov, who moved to Almaty in 2019, said in the video. “My homeland is Kazakhstan. I am Russian and I am against Russian military aggression. […] I appeal to all Russians of Kazakhstan and the world: Do not be silent, take a stand.”

Speaking to Eurasianet, Skalozubov said that he felt it was important for him to speak out to make it clear where the loyalties of citizens like him lay.

“The Kazakhs had logical questions: ‘What is in the heads of our Russians? If they are saying nothing, why is that? If Russia comes tomorrow to take away northern Kazakhstan, whose side will they be on?’” Skalozubov said. “I think that we [ethnic] Russians citizens of Kazakhstan should talk about this more. That if there is a war, our homeland is Kazakhstan, and we will always be for Kazakhstan.”

Taking full advantage of the increased public profile earned through the video appeal and his fund-raising activities in support of Ukrainians, Skalozubov turned his attention to a long-dormant idea to learn Kazakh properly. When he first moved to Almaty, he tried taking one-on-one classes, but the lack of real-life practice was discouraging. Now he is having another go.

“I asked a friend who speaks Kazakh well if she would help set up a Kazakh conversation club. She said yes. I wrote on Twitter that I was setting up a club. The tweet went viral. I thought 20 people would sign up, but instead I got 300,” he said.

The uptake has been so strong that what was meant to be a single group has become a whole cluster operating under the brand name Batyl bol, Kazakh for “be braver.” Typical attendees comprise both non-ethnic Kazakhs and Russian-speaking Kazakhs with a shaky grasp over their native tongue.

“I remember there was one day when there were only Russians,” Skalozubov said.

Skalozubov said many of the people involved in the club are Russians who fled for Kazakhstan immediately after the outbreak of the war and, latterly, following the partial mobilization drive announced by President Vladimir Putin in September.

“For a while, Russian [nationals] made up about 30 percent of the newcomers. Now almost all of our newcomers are Russians. For example, at the last meeting, four were locals, and the other 10 were Russians,” he said.

Askar is originally from Dagestan but moved to Moscow some years ago. He was among the large numbers of Russian citizens to leave his country in reaction to the war. When he spoke to Eurasianet, he had attended two sessions at Batyl bol.

“It feels important to me to know the language of the country you are in. It is a sign of respect for the people who took you in during a difficult situation,” Askar told Eurasianet. “Just how well I will learn Kazakh will depend […] but the main thing is at least to be able to greet people and speak with them. That is important from a moral point of view.”

Gestures of cultural and linguistic solidarity with the Kazakh people, as well as objection to the war in Ukraine, have not been without controversy, though.

Father Yakov says that when he took to social media to articulate his opposition to Russia’s actions, he got some pushback from critics complaining that he had “betrayed the ‘Russian world.’” But the cleric says this has not fazed him.

“Lately I have gained many more followers on Facebook, and most of them are locals,” he said. “Before, a part of them were Europeans or local Russians, and now I have become more involved in the Kazakh segment.”