Kazakhstan, Uzbekistan Dream of Surge in Trade and Freer Borders 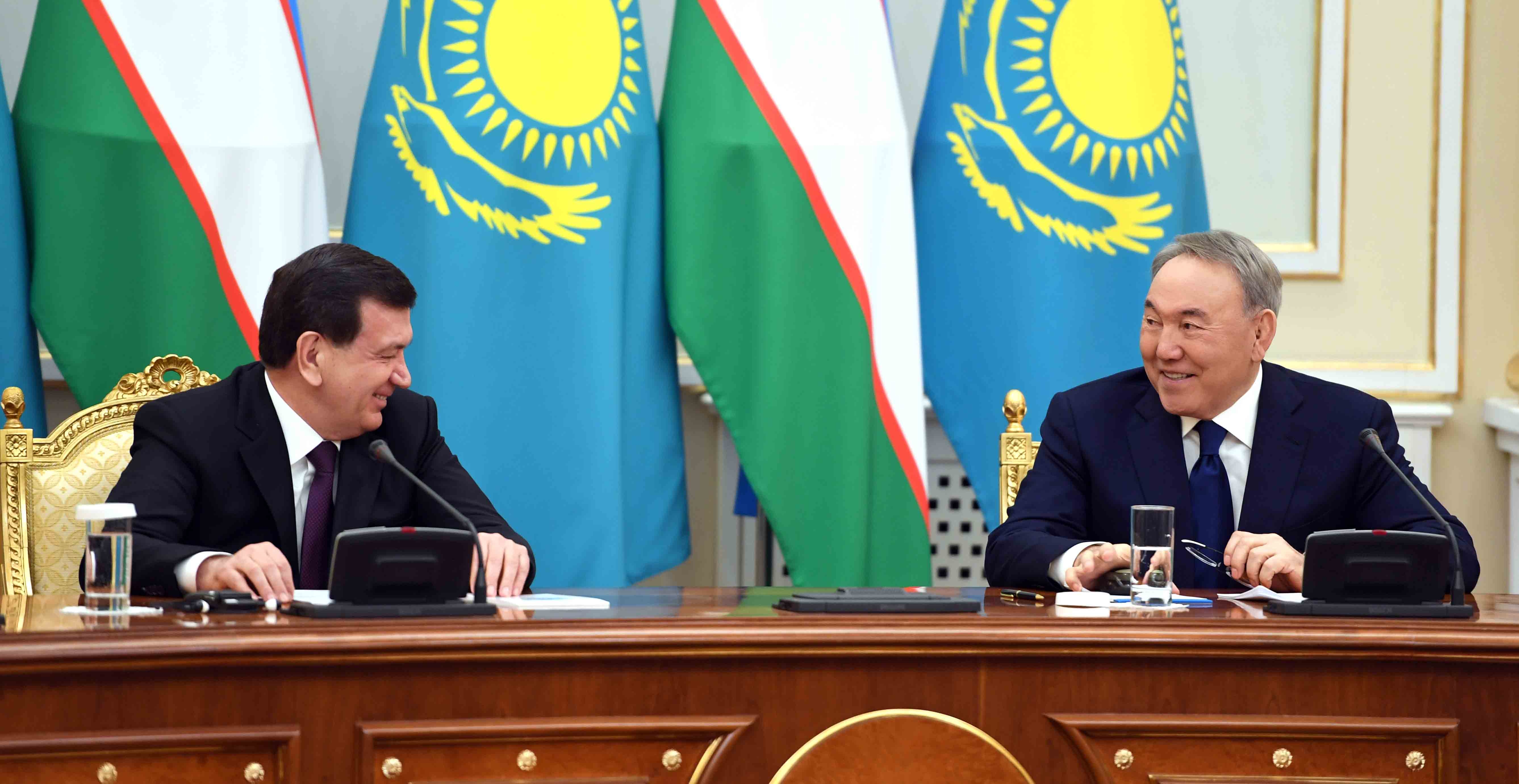 Kazakhstan’s President Nursultan Nazarbayev has hailed what he described as the fall of barriers dividing his nation and Uzbekistan since the ascent to power of Uzbek leader Shavkat Mirziyoyev.

The two met for high-spirited talks in Astana on March 23 that focused as much as anything on mutual admiration.

“Only in the last five months, or the fourth quarter of last year, trade turnover between our nations increased by 30 percent on both sides, and that includes new goods. Four trading houses have opened, there is 30 percent more grain, and Uzbek fruit and vegetables deliveries have increased by 25 percent,” Nazarbayev was cited as saying by Tengri News. “This is thanks to how the new leadership in Uzbekistan has opened all opportunities to trade and lifted barriers.”

Nazarbayev could barely contain his ebullience.

“There are no unresolved issues between Uzbekistan and Kazakhstan — not territorial, not with the borders, not with politics or the economy. We are free, like a blank page that is to be filled with good deeds that will benefit our nations,” he said.

It is worth recalling that Nazarbayev was an early champion of regional integration in Central Asia — an instinct sniffily mistrusted by Mirziyoyev’s late predecessor, Islam Karimov. Historians of the region may remember that in the wake of the Soviet disintegration, in 1994, Uzbekistan, Kazakhstan and Kyrgyzstan formed the Central Asian Union, which later became the Central Asian Economic Union (1998) and then the Central Asian Cooperation Organization (2001). In no form did the grouping ever become anything more than a talking shop, as Annette Bohr explained in a May 2004 paper.

“The character of this brand of ‘virtual regionalism’ was poignantly illustrated in January 2003 when Uzbekistan unilaterally decided to close its borders with Kazakhstan in order to prevent its residents from buying cheaper goods in Kazakh markets, although CACO leaders had reiterated their intention to strengthen economic cooperation less than a month before at a meeting in Kazakhstan’s capital, Astana,” Bohr wrote.

Nazarbayev showed no recriminations, however.

“The foundations of our relations were laid down by me and the first president of Uzbekistan, Islam Karimov. He was my great friend,” he told Mirziyoyev. “You and I will continue these traditions like brothers, close countries, like good neighbors, helping one another, opening our hearts to another, the embrace of two peoples.”

Getting down to business, Nazarbayev and Mirziyoyev inked 92 commercial agreements worth a total of $840 million during a Kazakhstan-Uzbekistan business forum taking place in Astana.

“At the forum alone, before it closes, there are plans to sign another 10 deals worth $94 million,” said the chairman of Uzbekistan chamber of commerce, Alisher Shaikhov, on March 23.

The hope is for the two countries to increase bilateral trade turnover from $2 billion to $5 billion, Shaikhov said.

According to CA-News website, one firm arrangement is for carmaker GM Uzbekistan to go into partnership with Kazakhstan’s AllurGroup and jointly manufacture the Ravon Nexia R3 model. Under the arrangement, AllurGroup would assemble the cars on a knock-down model at their factory in Kostanay — in other words, put together the kit of parts produced previously in Uzbekistan. While it is not spelled out, this appears like a way for GM Uzbekistan to slip under the net of Eurasian Economic Union-imposed import tariffs.

The plan is initially for AllurGroup to assemble 3,000 units annually, before gradually increasing to 7,000 units.

On the political front, Mirziyoyev and Nazarbayev signed a joint declaration on deepening strategic cooperation and strengthening good-neighborly relations between their countries.

They also signed a Strategy on Economic Cooperation in 2017-2019, agreements on the avoidance of double taxation and additional paperwork intended to ease cross-border road traffic.

The foreign and defense ministries sealed their own agreements for cooperation.

This is Mirziyoyev’s second foreign trip since coming to power, and in a break with tradition, he first dropped in on Turkmenistan, on March 6, instead paying his tributes to Moscow, as Karimov always did after elections.

The choice of destination bears an unmistakeable symbolism and at first glance confirms that Mirziyoyev’s early remarks about wishing to favor regional relationship over those with the larger powers was indeed serious.