Tokayev has promised reforms, but he has done that before. 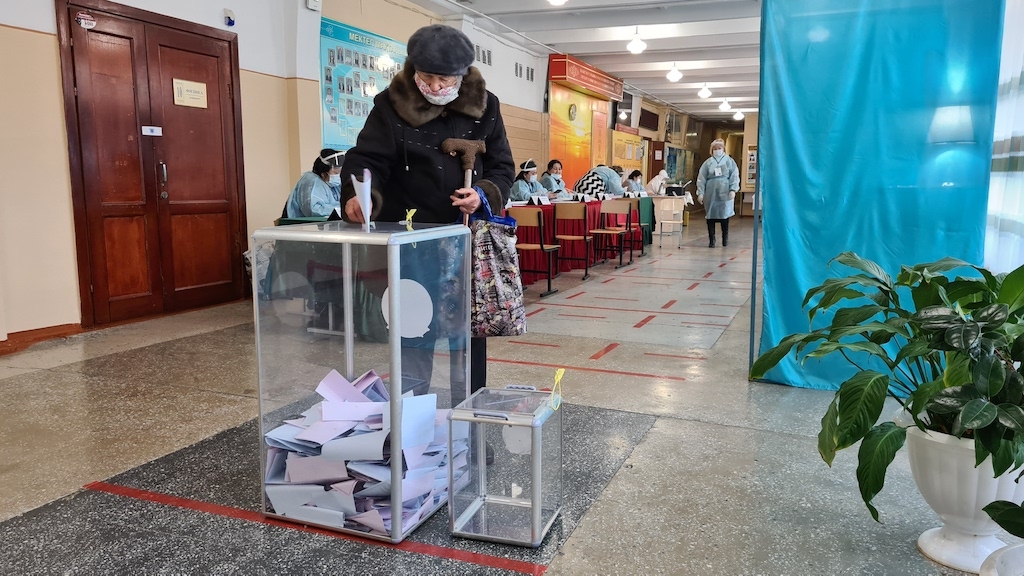 A voter casting her ballot at a polling station in Almaty. (Photo: Almaz Kumenov)

Kazakhstan’s parliamentary elections proceeded with predictable tedium inside polling stations, leaving all the excitement for the chilly streets, as police detained dozens of demonstrators across the country.

Voters were offered a meager selection of pro-government choices at the January 10 polls.

The ruling Nur Otan party is expected to have secured a commanding majority, as it has done at all recent elections. The would-be leftist People’s Party, the business-promoting Ak Zhol party, the Adal (Honesty) party or the rural affairs-focused Auyl (Village) party also ran for variety.

Preliminary results are expected on January 11.

The mood at polling stations visited by Eurasianet was sedate. Voters passed through disinfecting stations and had their temperature checked before receiving a ballot. The chair of one Almaty polling station was reluctant to allow a Eurasianet correspondent to enter – a scene that has played out in many other locations for reporters and independent monitors alike – but demurred when pressed.

President Kassym-Jomart Tokayev, who cast his ballot in the capital, Nur-Sultan, glowed with enthusiasm about the vote.

“This is a special day for our country and people, because elections are an important event in the life of every nation,” he said. “These elections will be an impetus for the further development of our people. In general, I hope that if more parties enter parliament, it will positively affect the future of the country.”

They were oddly chosen remarks. Political parties not fully onboard with the government’s policies have been shut out of the system altogether. The National Council of Public Confidence, a bridge-building forum that was supposed to reassure the activist crowd after the contentious presidential elections of 2019, have turned out to be little more than a hot air chamber.

Political apathy is the dominant note in public life in Kazakhstan, but a few hundred anti-government activists did nonetheless rally in cities across the country – mainly in the business capital of Almaty.

Critics of the regime are divided among several, often mutually antagonistic, camps.

Those aligned with the Oyan, Qazaqstan youth movement and the unregistered Democratic Party of Kazakhstan demonstrated on an Almaty square and held up signs urging people to boycott the election. They also chanted slogans against former President Nursultan Nazarbayev, who continues to wield considerable influence over government from behind the scenes.

Riot police were ruthlessly effective in surrounding this gathering, neutralizing their already low-key presence. Democratic Party leader Zhanbolat Mamay, who was among those penned into the police cordon for hours on end, had advertised his plans the day before.

“This is a dishonest election. How long can we endure the lies of the authorities? It's time to end this dictatorship. We must go onto the square and express our will,” he said in a Facebook video message.

In what appeared almost like self-parody, the more hardline, Europe-based opposition figure Mukhtar Ablyazov invoked recent events in the United States in calling on his supporters not only to hold rallies, but also to “enter the Akorda [presidential administration] building” in Nur-Sultan and “smash the regime.”

In the event, a few dozen of his supporters in Almaty were quickly carted off by police. In Nur-Sultan, demonstrators did not even have the chance to muster before being snatched up. Similar scenes played out in the cities of Oral, Aktobe and Shymkent.

Ablyazov-linked demonstrations are typically viewed with more suspicion by the authorities than those of other opposition groups and are, accordingly, treated more aggressively.

Although most votes will have gone for Nur Otan, other parties served to soak up some of the frustrations provoked by a particularly difficult year. Almaty resident Igor Kharitonov said he cast his ballot for the People’s Party.

“In Kazakhstan, the rich are getting richer, and for the poor, things have become very hard with prices for everything being as they are. I don’t know how to keep living like this,” Kharitonov told Eurasianet.

Despite the lack of competition, election officials still sought to keep vote monitors at arm’s length. Under a resolution promulgated on December 4 by the Central Elections Commission, only nongovernmental organizations that include election observation activities in their charter were authorized to have monitors in polling stations. That was a significant departure from the presidential elections in June 2019, when NGOs were able to document a substantial volume of fraudulent activity.

Sure enough, human rights NGO Erkindik Kanaty (Wings of Freedom), which had been hoping to undertake an exhaustive vote-monitoring exercise, said many observers were expelled from polling stations on spurious grounds. But a reporter for Radio Azattyk, the Kazakh service for RFE/RL, did manage to film one attempt at ballot box-stuffing in the Almaty region.