Kazakhstan Votes for More of the Same 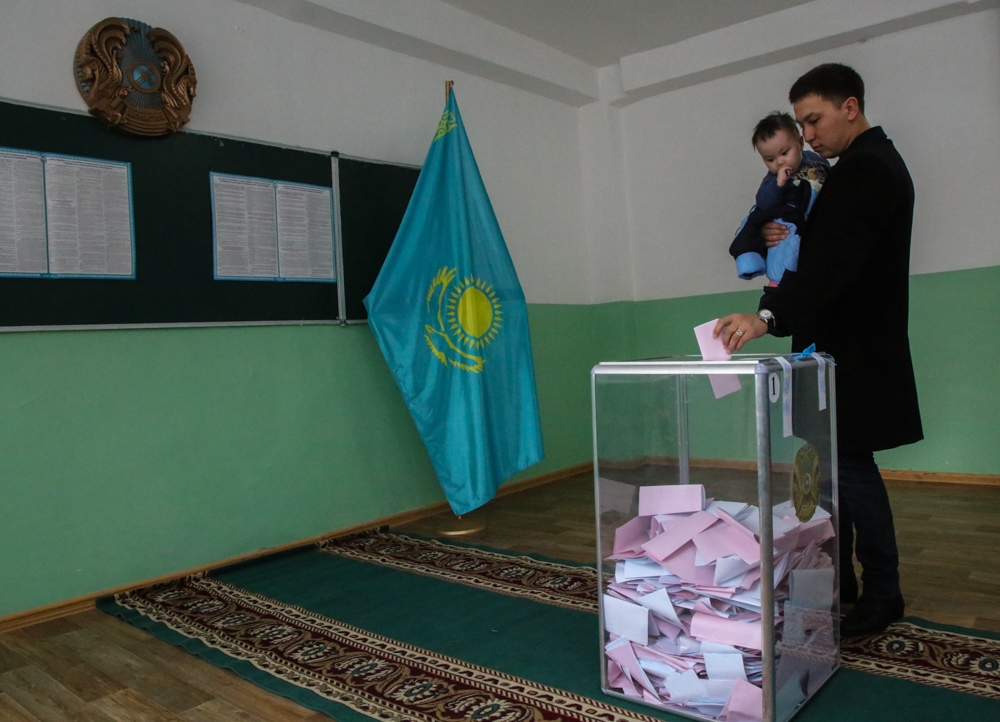 Voter casts his ballot at a polling station in Astana

Kazakhstan is voting in a snap parliamentary election expected to return a storming victory for the ruling Nur Otan party, which has run without any substantive opposition.

Speaking as he cast his ballot in Astana, President Nursultan Nazarbayev said the election was a “landmark in Kazakhstan’s most recent history” and urged incoming legislators to implement the reform program put in place last year to help fight the economic crisis gripping the country.

Voters leaving polling stations in Astana and Almaty overwhelmingly said they had cast their ballots for Nazarbayev’s Nur Otan party.

It is the party’s association with the 75-year-old former Communist party boss, who has ruled Kazakhstan for a quarter of a century, that informs the choice of many voters. Most appeared ill-informed about the content of Nur Otan’s manifesto and were also hard-pressed to name any of the five parties challenging Nur Otan’s dominance in the Mazhilis, the lower house of parliament.

“I voted for Nur Otan,” student Adilet Aliturliyev, 23, told EurasiaNet.org. “It’s the number one party in Kazakhstan, and it’s the party of the president.”

Despite having only just cast his ballot, Aliturliyev was able to name only one of the other parties standing, the Communist People’s Party of Kazakhstan, known by the acronym KNPK and led by Zhambyl Akhmetbekov.

None of the parties offered any substantive criticism of Nazarbayev and his Nur Otan party during the campaign, and often appeared downright supportive of them, although they are presiding over the worst economic crisis to hit Kazakhstan for two decades owing largely to low oil prices.

Most genuine opposition parties have been closed down in recent years, leaving many disgruntled voters staying away from polling stations.

“I’m not going to vote because the election has no meaning,” one young professional woman in Almaty told EurasiaNet.org, bemoaning the lack of choice in an election in which all parties appear to support the president.

One middle-aged woman at a polling station in Astana expressed her unhappiness by spoiling her ballot.

“Out of politeness, I just put a tick in the box for Nur Otan, but I didn’t sign, so the vote won’t be valid,” she said after grumbling that the local authorities had failed to even clear away the mud and slush outside her polling station. “I don’t think there’s much point to these elections.”

She too declined to give her name.

Others queried at the same polling station would only remark gruffly that they had “fulfilled their civic duty,” but declined to be pressed further for their views on the electoral process or the range of political parties on offer.

Analysts are predicting that the new Mazhilis will be similar to the outgoing rubber stamp legislature, which contained two token Nur Otan rivals — Ak Zhol and the KNPK — that supported the ruling party as a matter of course.

Nur Otan won the last election in 2012 with 81 percent of the vote, and in the previous election in 2007 it was the only party to clear the electoral threshold of 7 percent, resulting in a one-party parliament for Kazakhstan.

The Mazhilis contains 98 MPs elected by party list and nine sent by the Assembly of People of Kazakhstan, a grouping of presidential appointees representing the country’s ethnic groups.

Kazakhstan has never held an election deemed free and fair by international observers from the Organization for Security and Cooperation in Europe, which is monitoring this vote and will release preliminary findings after the official election results are announced on March 21.

Civil society activist Galym Ageleuov said he had observed irregularities in polling stations in Almaty on the morning of election day.

“There are already violations,” he told EurasiaNet.org, citing instances of family voting — when one family member votes for other eligible members in their absence — and multiple voting.

In the western city of Aktau, an official at one polling station refused to allow a reporter for RFE/RL’s Kazakhstan service to take photographs, claiming that it was against the rules.

“I told her that I am a journalist, she said that they had a camera installed and that this was more than enough,” the RFE/RL reporter, Saniya Toiken, said.

Nazarbayev defended Kazakhstan’s democratic record as he cast his ballot, saying that western democracies such as the United States had spent hundreds of years developing their systems but that Asian countries were different.

“Democracy is not the start of the road. Democracy is the end of the road,” he said in remarks quoted by Kazinform news agency. “We are gradually reforming, adopting laws, moving in that direction. And we must not be rushed, because we are different.”

He also said that reform of Kazakhstan’s super-presidential political system was possible after the election if there was “the will” for it, but stopped short of making any firm pledges.