Eurasianet correspondent Chris Rickleton was among many journalists detained by police. 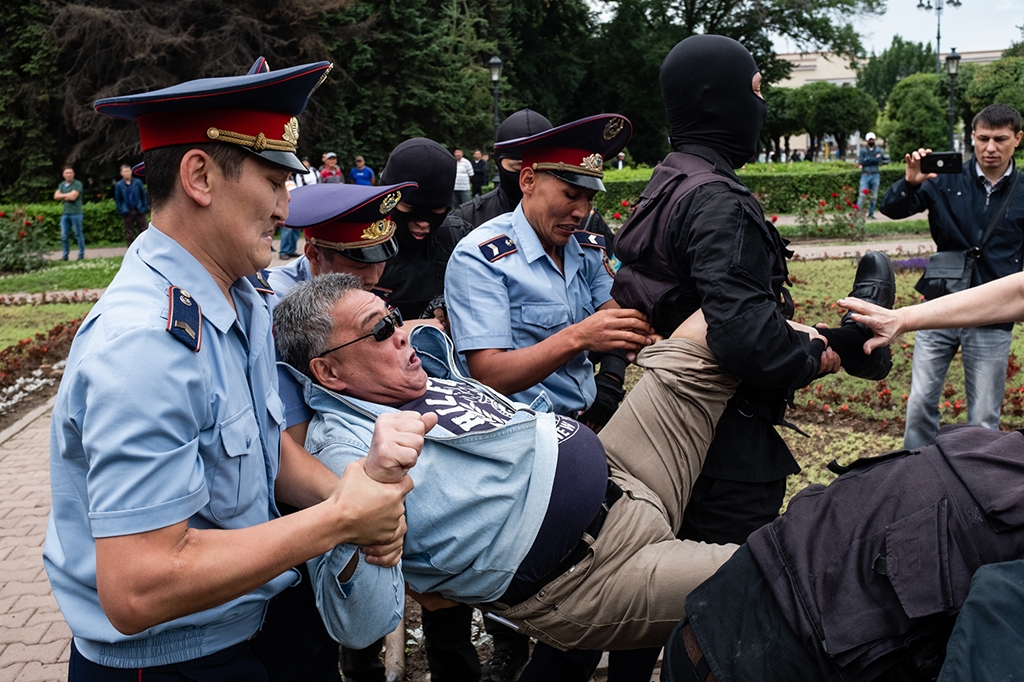 A demonstrator being carried away by police in Almaty. (All photos by Danil Usmanov)

Kazakhstan’s presidential election was never going to be a masterclass in democracy. But the heavy-handed, mass detention of peaceful demonstrators, including several journalists, has further tainted what was already a much-criticized process.

In the business capital Almaty, police were out in force from the morning on the city’s Astana Square to prevent the mustering of an anti-government protest, which had been advertised earlier on social media. As people began to arrive for the appointed midday starting time, police acted swiftly, roughly dragging people away into waiting buses. 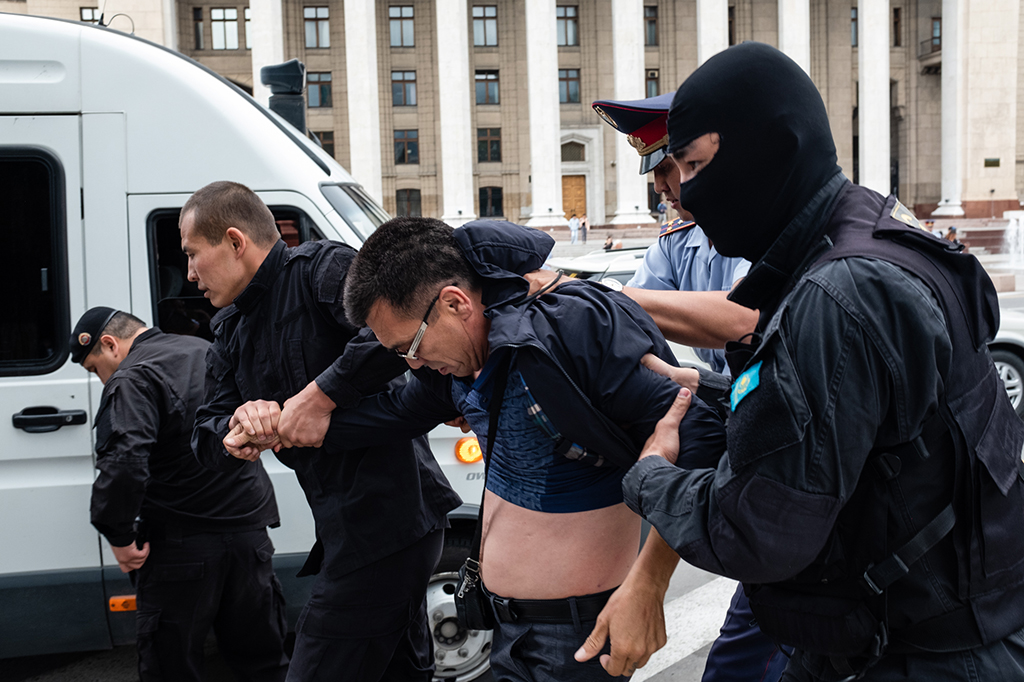 The more lively rally participants chanted “boycott,” decrying a vote that they feel is intended only to lend a veneer of legitimacy to President Kassym-Jomart Tokayev’s ascent to office. Tokayev was handpicked by former President Nursultan Nazarbayev, who resigned in March, to serve as his successor.

“I am against this regime and I am against these elections … because I don’t consider them fair elections and true elections,” one young man taking part in the demonstration told Eurasianet, speaking in English. “They are just a theater for people [and] for other countries.” 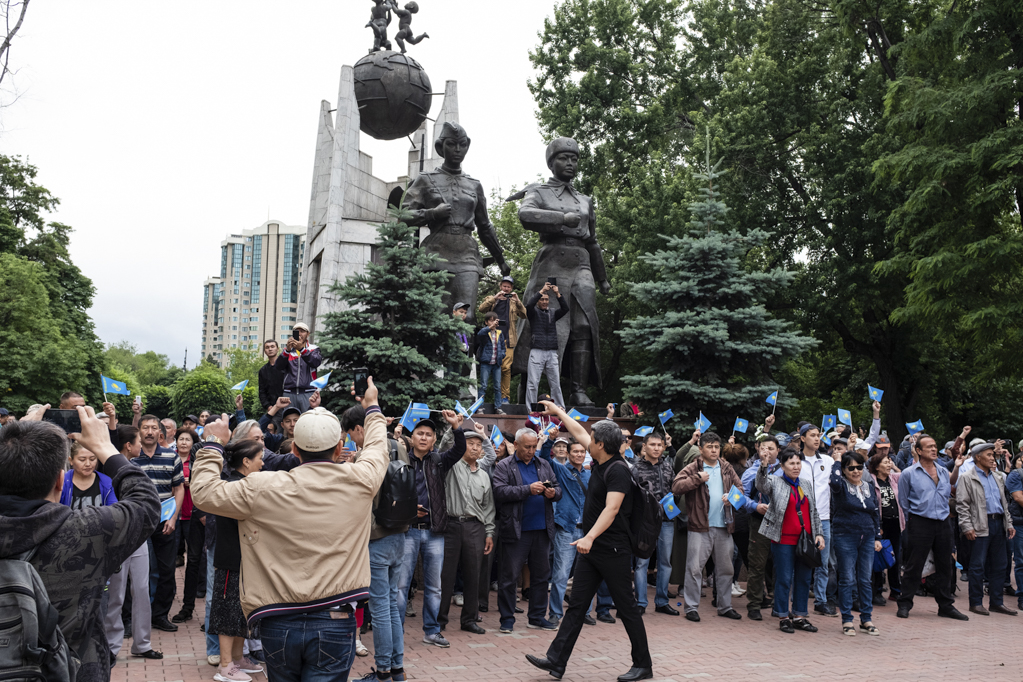 Tokayev, who cast his ballot in the capital, Nur-Sultan, said he was unfazed by the protest rallies and reports of his opponents embracing the chant of “Tokayev is not my president.”

“If there are people chanting such slogans, that is their choice,” he said, responding to a question posed by a reporter for RFE/RL’s Kazakh service, Radio Azattyq.

That blasé attitude appeared not to have filtered through to law enforcement officers across the country.

A Eurasianet correspondent on Almaty’s Astana Square estimated that many dozens, possibly even hundreds, were detained. The police were clad in riot gear, complete with padding, helmets and shields. Demonstrators, some of them carrying little blue Kazakh flags and flowers that they proffered to riot troops, behaved peacefully, although there were several who protested vocally as they were attacked and hauled away by police officers. 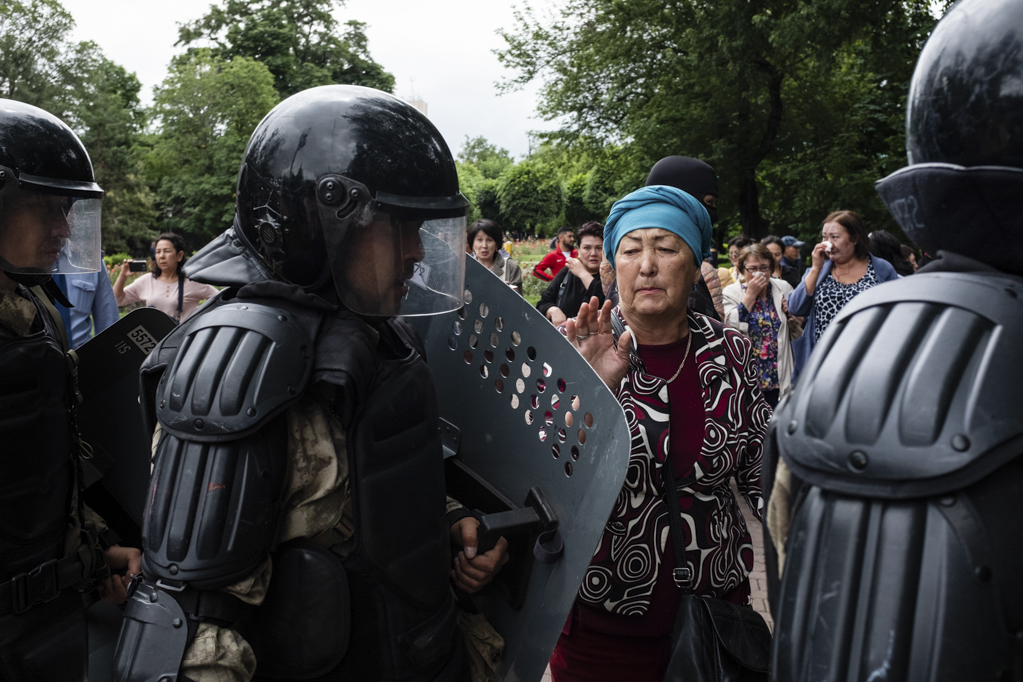 In the wake of the extended melee, Astana Square was littered with miniature flags, deflated blue balloons, and even the solitary flat-heeled shoe of a demonstrator that had been taken by police.

A similar pro-democracy demo in the capital, Nur-Sultan (formerly Astana), drew crowds of several hundred around the Zhastar Youth Palace, which is about six kilometers north of the presidential administration building. Police efforts to quash the gathering were just as robust there as they were in Astana. Footage posted on Twitter showed heavily armed riot troops facing off against a sometimes testy crowd.

A Radio Azattyq correspondent reported spotting 10 busloads of people being driven away from the square in front of Zhastar Youth Palace.

Police appear to have been under instructions not to spare accredited journalists the rough treatment either.

Agence France-Presse and Eurasianet correspondent Chris Rickleton and an AFP videographer were among many reporters detained by police in Almaty while covering the protests. A self-snapped photo of Rickleton in a police van showed him with heavy bruising under one eye.

“Black eye sustained during a rough arrest. I fell on a policeman's knee and was not struck deliberately. My accreditation was taken from me,” Rickleton wrote in a tweet from the police van.

Rickleton was released from custody after a few hours. He told Eurasianet that police deleted their video footage, which included shots of people struggling to free themselves from riot police.

Some RFE/RL reporters were not given the paperwork enabling them to do their jobs unimpeded.

“Seven journalists came to Kazakhstan from Prague, Moscow, Bishkek. They don’t have accreditation. Another group of people [six journalists] are outside of Kazakhstan. They also can’t report from Kazakhstan embassies,” Kazakh service chief Torokul Doorov wrote on Twitter. 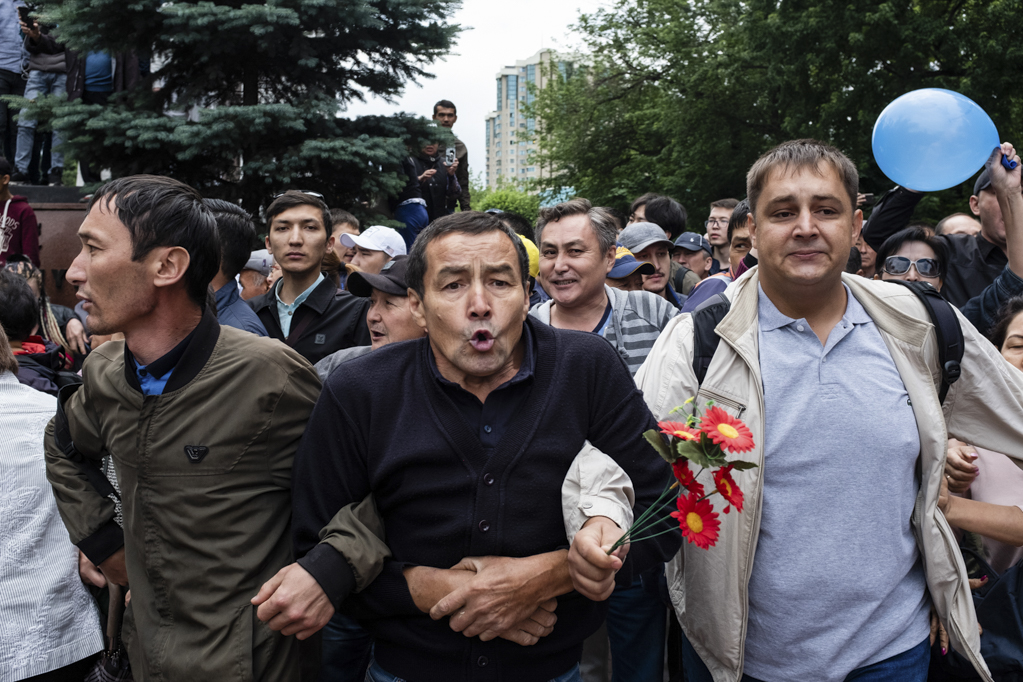 First Deputy Interior Minister Marat Kozhayev described the rallies in Nur-Sultan and Almaty as the handiwork of the Democratic Choice of Kazakhstan, a foreign-based opposition movement that the government has designated an extremist group

“The fugitive leaders of this organization, on the eve of the elections, embarked on a major propaganda push to discredit the authorities and to call for a boycott of the snap presidential elections. They also called for the holding of socially disruptive rallies during the election period,” Kozhayev was reported as saying by the state news agency Kazinform.

Polling itself, meanwhile, appeared to be proceeding without incident. Voting started at 7 a.m. and was due to end at 8 p.m.

Polling stations in Nur-Sultan reportedly set up televisions carrying the live broadcast of a boxing super middleweight title fight taking place in New York between local favorite Gennady Golovkin and Canada’s Steve Rolls. In the event, Golovkin swept aside the challenge from Rolls with ease, laying him down toward the end of the fourth round.

Tokayev is crushing his six would-be opponents even more effortlessly.

Those rivals include Daniya Yespayeva from the pro-government party Ak Zhol; Toleutai Rakhimbekov from the rural issues-focused Auyl political party; Zhambyl Akhmetbekov, who was put forward by the Communist People's Party of Kazakhstan; Sadybek Tughel, who belongs to a movement called the Eagles of the Great Steppe; and Amangeldy Taspikhov, a former functionary with the ruling Nur Otan party. All of these contenders have run low-key and highly consensual campaigns. None appeared to even pretend they stood a chance of winning. 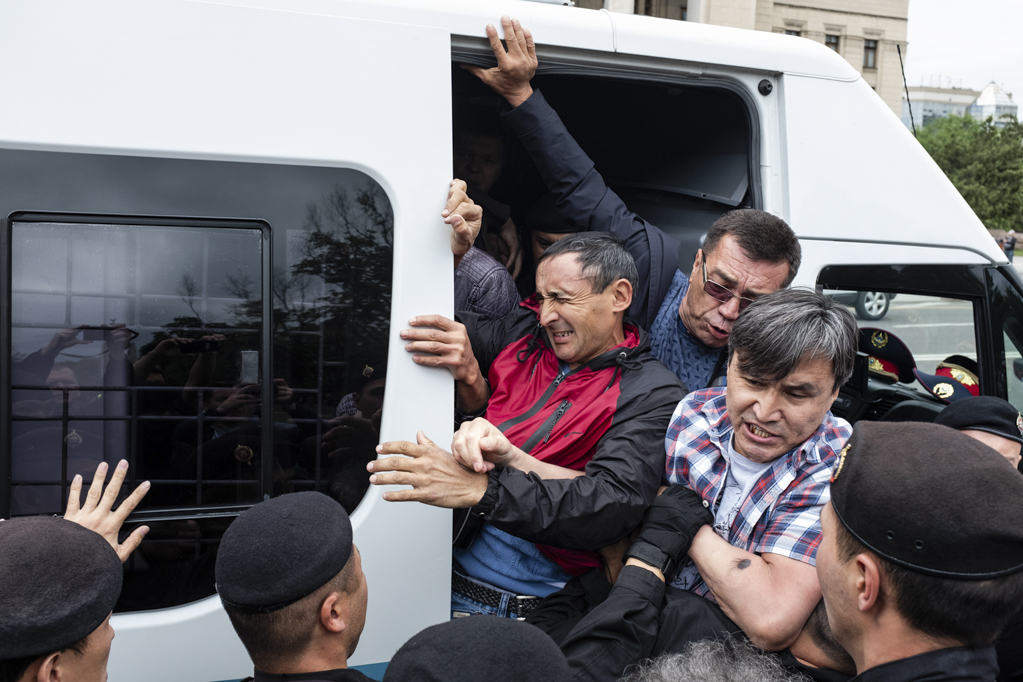 The only genuinely opposition-minded candidate is Amirzhan Kosanov. He has been criticized in some quarters, however, for agreeing to participate in the election and thereby lending it a flavor of legitimacy. His campaign was notably low-energy and, inevitably, wholly negligible in its resources compared with the state machine that mobilized behind Tokayev.

Tokayev cast his own ballot at the Astana opera house in Nur-Sultan. He described the voting day as a historic event.

“I believe that any elections, especially those for the president, is not a battleground and is not an excuse for confrontation. This is a competition between platforms and opinions,” he told reporters after voting. 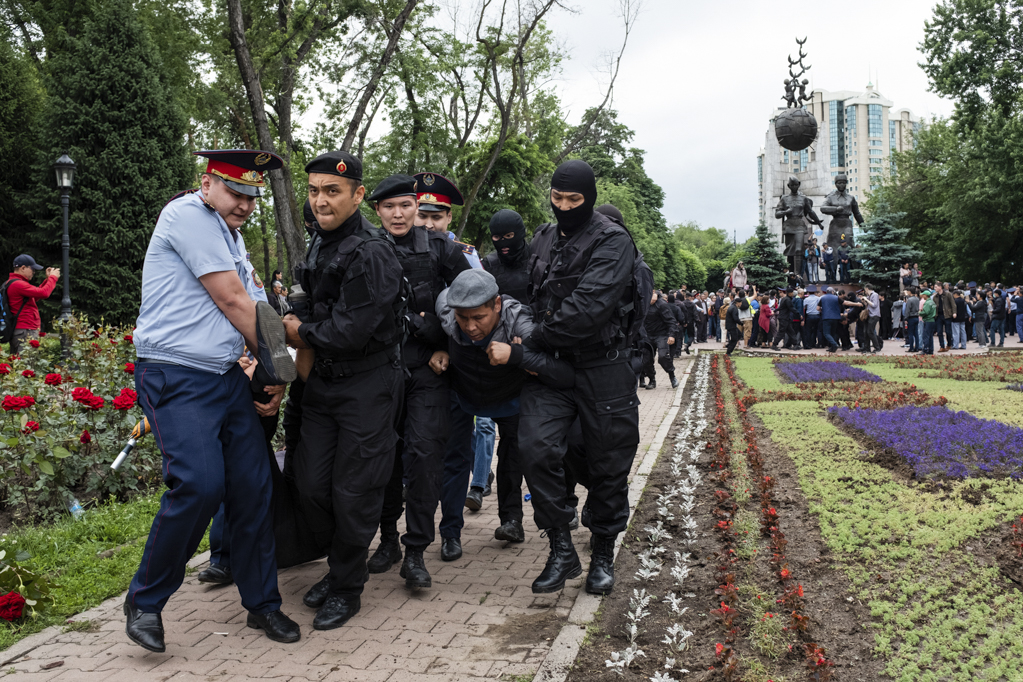 Beyond the protests, one slightly concerning development for the authorities was the notable – for Kazakhstan – drop in turnout figures. When Nazarbayev was elected with 98 percent of the vote in 2015, the turnout was purportedly 96.8 percent. At the close of voting this time, the figure was 77 percent.

Exit poll data gathered by two government-approved groups and published at midnight Nur-Sultan time showed Tokayev garnering around 70 percent of the vote. That is a considerable drop-off from what his predecessor managed four years ago.

Meanwhile, Kosanov received 15 percent of ballots cast, by far the best showing for a rival presidential contender in Kazakhstan’s history.

This story has been updated to reflect unfolding events.