Kazakhstan: Waking up to reform

Kazakhstan is entering a virgin territory of political confrontation. A newly formed collective of youthful activists hopes to lead the way. 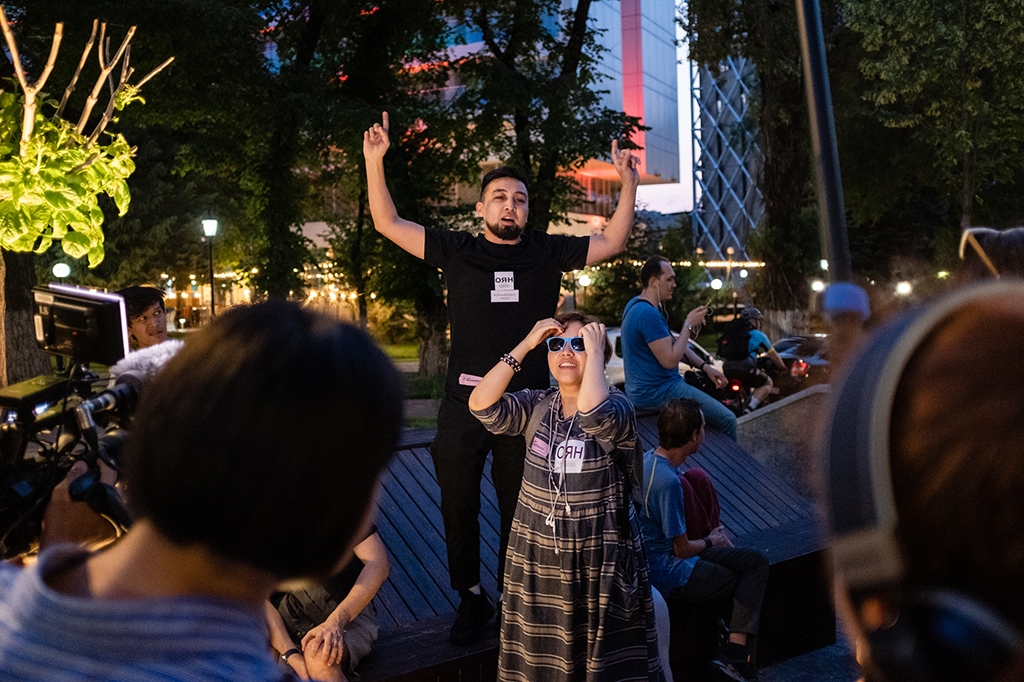 Dimash Alzhanov announces the end of a march on June 7 and suggests organizers retire to a local bar. (All photos by Danil Usmanov)

With that soundbite, Kassym-Jomart Tokayev struck a conciliatory note on June 10 as a preliminary vote count showed he had, as expected, strolled to a crushing win in Kazakhstan’s snap presidential election.

Elsewhere in the capital, Nur-Sultan, demonstrators pacifically expressing different views were being charged by riot police and dragged away into waiting paddy wagons. Similar scenes of chaos played out deep into the night in the country’s largest city, Almaty.

If the events of the past few days are anything to go by, Kazakhstan is entering a virgin territory of political confrontation. And a newly formed collective of youthful activists called Oyan, Qazaqstan (Wake Up, Kazakhstan) hopes to lead the way.

Oyan, Qazaqstan has no leaders, but it does have some notable personalities. One is Dimash Alzhanov, a British university-educated politics geek and pro-democracy activist. He is not buying it when Tokayev talks about a big tent and claims to want dialogue with protesters.

“Despite protests continuing for a third day [into the early hours of June 11] against the falsification of the elections, which new people have joined, the powers-that-be continue their policy of suppression,” Alzhanov told Eurasianet. “Dialogue with society is not even viewed as a possibility.”

Alzhanov was detained twice during the protests: once while observing a demonstration in Almaty, another time while trying to secure the release of detainees from a police station. Around 700 people were detained on June 9 and 10, according to officials.

Oyan, Qazaqstan came together just before the June 9 election. The name is a tribute to a celebrated verse of defiance written in the early 20th century, when Kazakh lands were part of what was then the Tsarist Empire.

“We want to declare the need for profound political reforms in Kazakhstan,” Alzhanov told a news conference on June 5.

What Oyan, Qazaqstan means by that in the specific is indeed radical – the abolition of the presidency and the creation of a parliamentary democracy.

“Great powers concentrated in one person’s hands lead to the usurpation of power and totalitarianism,” Alzhanov said. “A parliamentary republic is the first step to break once and for all with the totalitarian past.”

This weekend’s election, which has mainly served the function of further cementing the authority of Tokayev, who was handpicked to rule by his predecessor, Nursultan Nazarbayev, has helped lend urgency to the change agenda.

“This is an important moment in our history because the transition of power shouldn’t happen like this,” Alzhanov said.

What irks Alzhanov and his peers is the sense that Tokayev has been eased into office over their heads. The election has to them looked like choreography – an assessment that was lent some weight by a highly critical post-vote report from the Organization for Security and Cooperation in Europe’s election monitors.

“We need to clearly declare that we have rights. We have freedoms. And we are capable of deciding the future of this country,” he said.

As befits the time, Oyan, Qazaqstan has its roots in an Instagram campaign. A series of hashtags popularized on the social media website by Anuar Nurpeisov, who was until recently best known for his acting and pop producing, and artist Suinbike Suleimenova included #QazaqKoktemi (“Kazakh spring”) and #MenOyandim (“I woke up”).

Those online origins have left the group open to charges that members are little more than hipster slacktivists out of touch with ordinary people.

Urban opposition types are sometimes described by their detractors as “coffee drinkers,” a dismissive suggestion that they do little but navel-gaze in cafes. A presidential campaign video produced for a would-be Tokayev rival unimpressed by the likes of Oyan, Qazaqstan featured doughty rural types speaking of their hard day’s work.

“Every day I wake up at dawn. I don’t drink coffee but instead go into the yard and feed the geese. This is my only source of income,” a woman in the spot says to camera, barely audible over the clacking of the birds.

Oyan, Qazaqstan has also faced criticism for seizing on an agenda of political and human rights reform that stubborn and often-overlooked campaigners in Kazakhstan have been plugging away at for decades. Veteran activist Galym Ageleuov, however, welcomed the addition to the community of dissenters, describing them as the “next wave of young people succeeding us.”

The movement might be new, but the accusations they are hearing from those tasked with enforcing the government’s hardline are not. When group member and journalist Assem Zhapisheva was briefly detained on June 10, which happened while she was observing a protest in Almaty, she was asked by police why she wanted to “destroy the country.”

“They asked: why do you help foreign journalists show Kazakhstan in a bad light?” she told Eurasianet, recalling her interrogation.

One acute challenge for Oyan, Qazaqstan – something its own creators acknowledge – is to put clear blue water between the group and Nur-Sultan’s despised enemy No. 1, fugitive former banker Mukhtar Ablyazov. At their maiden press conference earlier this month, Oyan, Qazaqstan’s founders indicated implicitly that they had nothing to do with Ablyazov and would certainly not be taking his money.

Almost every significant anti-government demonstration that has taken place in Kazakhstan in the past few months and years has ostensibly happened at the instigation of Ablyazov. Speaking through his favorite platform, live Facebook videos, he sets a date, time and location. And then, anywhere between a few dozen to several hundred people turn up. Some are genuine Ablyazov supporters. Others are just disgruntled people who, while not being fond of Ablyazov personally, are eager to piggyback a rare opportunity to vent their frustration in public.

The election protests are a case in point. Ablyazov called them, and a few Oyan, Qazaqstan supporters attended, some just to observe proceedings.

But attending an Ablyazov-summoned rally is dangerous business. He has been multiply convicted in absentia on various charges in Kazakhstan. And his Democratic Choice of Kazakhstan has been designated an extremist group.

The authorities see Ablyazov as “Mr. Evil […] who controls all protest in the country,” analyst Dosym Satpayev told Eurasianet before the election. “But the protest public is not monolithic.”

For all Tokayev’s post-election talk of a consensus-building “committee of public confidence,” Nur-Sultan has shown no sign it is making any fine distinctions. Everybody gets thrown into police van – demonstrators, journalists, and even people who happen by chance to be walking near a protest rally.

The distrust goes both ways.

“The complication here is that the authorities have low legitimacy and low trust among society,” Alzhanov told Eurasianet. “No one believes in dialogue with them.”

Satpayev said he believes a schism could form between hawks and doves in the ruling establishment.

Should the hawks win, Kazakhstan will face “quite a harsh repressive regime,” he said.

“If within the elite a reforming wing emerges […] there’s a certain chance reforms could start in Kazakhstan,” Satpayev said.

In the latter case, the likes of Oyan, Qazaqstan will expect to help set some of the terms.