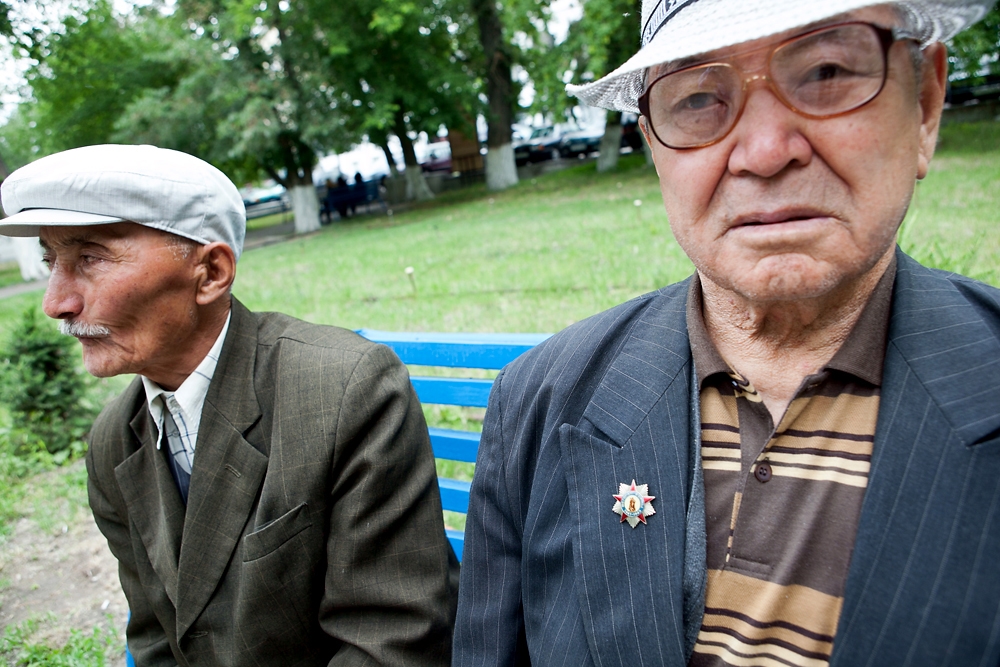 A new Kazakh pension reform bill would increase the retirement age for women from 58 to 63 – to be on a par with the male retirement age. (Photo: David Trilling)

Zhaken Bissenova, the head of a non-profit that helps impoverished women in Almaty, was a long-time supporter of Kazakhstani President Nazarbayev and his economic policies – until recently.

For more than two decades, the Nazarbayev administration’s emphasis on a Soviet-style social safety net ensured that retirees like Bissenova remained loyal. But now, as the country's economic growth slows and authorities start to tighten purse strings, a pension-reform bill passed by parliament in early May threatens to alienate what, until this point, has been a solid part of the administration’s base.

"Nazarbayev was popular several years ago across the country," Bissenova told EurasiaNet.org. "Now people in both urban and rural areas are growing disillusioned with his policies. Discontent is brewing in the countryside, where living conditions are dismal, and a protest mood is palpable. But the government doesn’t want to listen to its people."

The bill, which is awaiting Nazarbayev’s signature, would increase the retirement age for women from 58 to 63 – to be on a par with the male retirement age. It would also reform the state pension fund, introducing a compulsory retirement contributions (estimated at 5 percent of monthly wages) for some workers. Presently, such contributions are voluntary.

In addition, the bill could potentially spur big changes in the way pension funds are managed in Kazakhstan. Since the last round of reforms back in 1998, most retirement money has been handled by 10 private funds. Of the $20 billion that the Central Bank estimates sits in Kazakh pension funds, over 80 percent is in private hands. The government says the annual service fees on these funds, which averages 26 percent, is much too high. It remains unclear just how the reforms threaten such private funds; what seems certain is that the state seems determined to assume a larger management role.

Some officials insist any pending changes would aim to safeguard retirement funds and ensure steady growth. In January, addressing a government meeting, Nazarbayev said funds would be consolidated “to credit the real economy” and “assist industrialization.” Government management, he stressed, “will allow us to more efficiently and safely use the [pension] assets accumulated by our citizens."

Official explanations are doing little to quell concerns. In fact, they are prompting some acts of civil disobedience rare in Kazakhstan. At a tense press conference in late April, an angry protester threw eggs at Minister of Labor and Social Protection Serik Abdenov as he was defending the legislation.

Abdenov – at 36, Kazakhstan’s youngest minister – has been widely ridiculed for his attempts to sell the reform package. Questioned by workers in April why women should work longer, Abdenov stuttered, “because, my dear fellow countrymen, because, because.” That has spawned an Internet campaign against the legislation that succeeded in galvanizing popular anger.

"The reforms have been conceived and are being implemented by a small and well-connected group of men who do not care about concerns of the majority of the country’s population, including women," said Gulnur Hakimjanova, head of ASRIV, an Almaty-based non-governmental organization that works with vulnerable social groups. “We need open debates in which people can learn about what is really going to change, how much money is involved, and how the changes will be implemented.”

Given that the average life expectancy in Kazakhstan is 67, some observers are critical of the government’s new pension-age qualification as too coldly efficient. Meanwhile, economists and businesspeople are challenging the economic rationale behind the reforms. Sergei Akimov, a research director at Kazpotrebnadzor, an Almaty-based consumer-rights watchdog, told EurasiaNet.org that the reforms may end up hurting the country in the long-run by increasing unemployment, especially among the young. He estimates implementation of the pension bill would end up putting 500,000 young people out of work.

It is not just workers who are livid. Some investors with exposure in the 10 existing private pension funds voiced concern to EurasiaNet.org about possible changes to the existing system. Any form of consolidation would undermine their investments and divert their clients, they said.

In a May 20 interview with Kazakh weekly Megapolis, Aydar Alibaev, the head of the private Association of Pension Funds, said reformers weren’t doing enough to take the existing funds’ interests into account. “Instead of developing this system, people who lack understanding of financial markets … are proposing to destroy the whole sector of the economy and push thousands of people out on the streets," Alibaev said.

The reforms are causing divisions within the government as well. Some top officials have reportedly opposed the idea of lumping together two critical issues: increasing the retirement age and creating a unified, state pension fund. Some privately hope Nazarbayev will not sign the bill. Indeed, rumors are circulating that Nazarbayev, to sharpen his populist credentials, will not sign it. Others note the government has invested too much in the reforms for Nazarbayev to back down now.

Akimov of Kazpotrebnadzor says that although social discontent is palpable, it has not reached the level where it could fuel mass protests. “The formal opposition is weak in Kazakhstan, and there is no organization that could unite these disparate outpourings of social anger. Most likely, people will just have to swallow this reform.”

Alisher Khamidov is a researcher who specializes on Central Asian affairs.