Dialogue is preferred to confrontation, although salary imbalances are still strong. 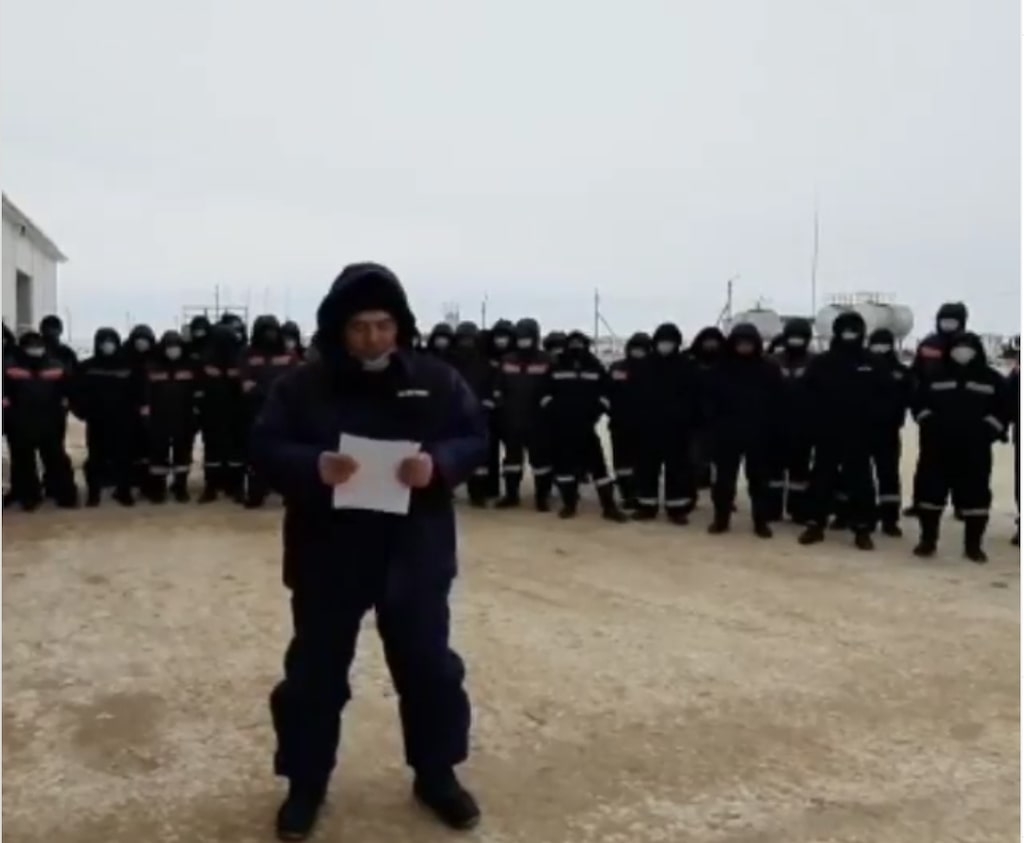 A worker from AMK Munai addressing President Tokayev in a video appeal.

The year has started uncomfortably for Kazakhstan’s mining and oil companies as workers become more vocal in their demands for higher salaries.

Successes achieved by strikers at some enterprises may embolden others to repeat the same feat.

Employees at the Italian-owned oil services company Bonatti, which is involved in development of the Karachaganak oil and gas condensate field in the West Kazakhstan Region, set the pace. On January 6, around 300 workers laid down their tools and declared a hunger strike in a demand for their salaries to be increased by 50 percent.

On January 12, laborers at the Yubileinoye gold deposit in the Aktobe Province, which is being developed by the locally based AltynEx Company, followed suit by declining to turn up for work. They wanted a 50 percent pay rise too. One rock-crushing machine operator company told RFE/RL’s Kazakh service, Radio Azattyq, that his 90,000 tenge ($215) had not been adjusted for more than five years.

Three days later, it was the turn of SiBu, a drilling company in the Caspian coastal city of Aktau, to hear from its workers, who complained about the sharp contraction of their annual bonus – another casualty of pandemic-related falls in industrial output.

On January 25, oilmen at Chinese-owned KMK Munai, the developers of a field in the Aktobe Province, stopped work. They grumbled that at around 130,000 tenge ($130), their income was “even lower than that of many pensioners.”

Inspired by this example, employees for a nearby and similarly named company, AMK Munai, went on strike a few days after that, stating that they had been demanding a salary increase since March, but to no avail.

“Technicians in our company make 67,000 tenge ($160). With this money, you cannot support a family, pay for utilities, buy groceries, and that is while prices are rising from day to day,” one worker said in an online video appeal addressed to President Kassym-Jomart Tokayev.

On and on it goes.

On February 1, staff at oil industry transportation services company MunaiSpetsSnab took the baton by striking to demand more work hours and an increase to their hourly salaries.

What is especially striking about many of these episodes is that companies and local authorities frequently contrived to avoid confrontation and instead pursued mediation and some degree of compliance with the demands of workers. KMK Munai went a little further and organized a bus service to transport its employees to and from work free of charge.

Some lessons have been learned since the events of 2011, when months of sit-in protests by oil workers in the western city of Zhanaozen culminated in bloody clashes with police that left more than a dozen laborers dead. Those protests were inspired in part by frustration at perceptions of an imbalance between the high salaries of management – many of them foreign nationals – and the low pay of laborers.

While the flat refusal to engage with strikers has softened, however, that imbalance has changed little.

Mendesh Salikhov, a veteran worker in Kazakhstan’s oil and gas industry, told Azattyq in an interview that resentment continues to fester with regard to foreign managers who “don't know what oil smells like” and yet earn far more than people risking their lives daily.

“Locals are paid less, foreigners more. People see it all,” Salikhov warned Azattyq. “The wages of miners and oil workers should be above [the national] average."