Authorities are trying to co-opt the Immortal Regiment memorial march. 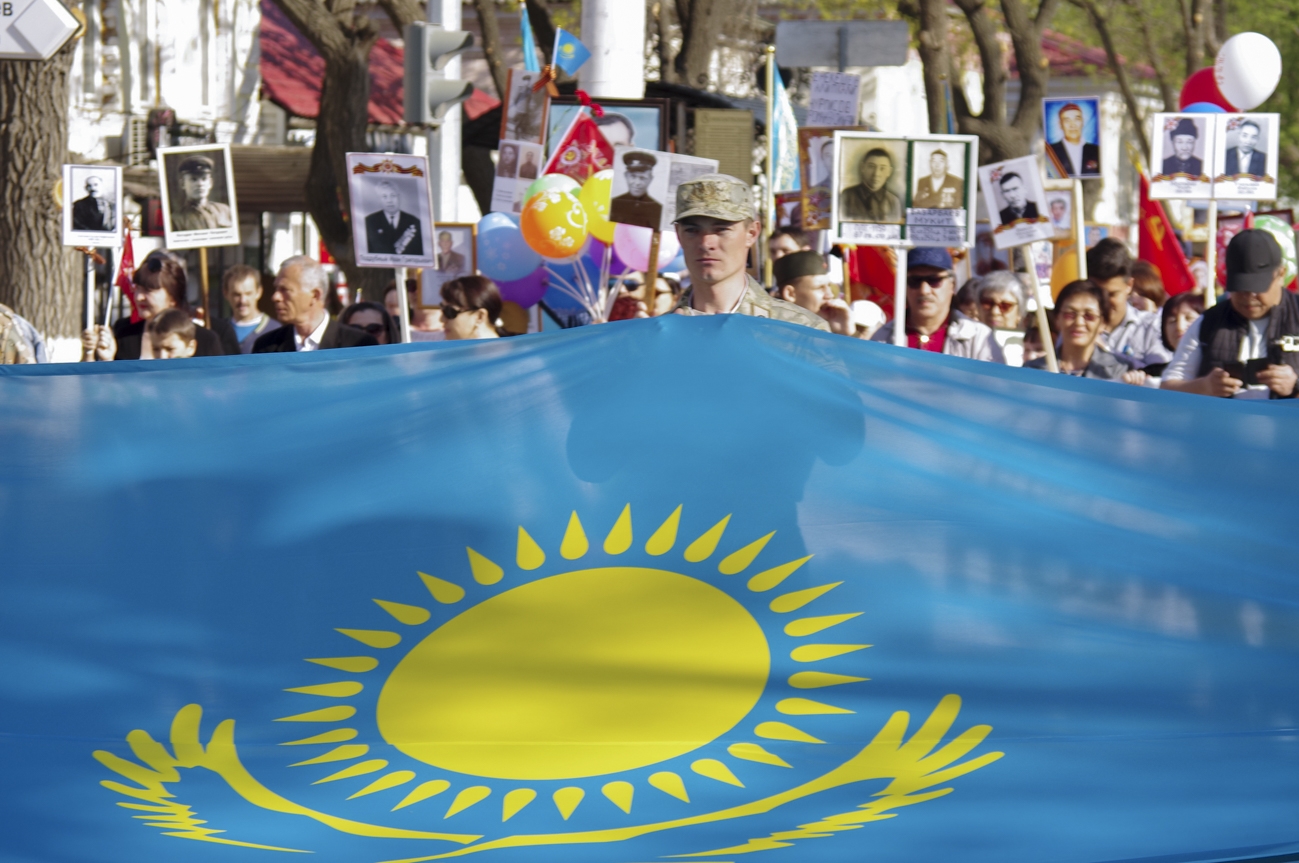 A dozen troops from Kazakhstan’s border service carrying a giant Kazakh flag appeared as the Immortal Regiment march began in Oral, Kazakhstan on May 8. It wasn't part of the organizers' plan. (All photos by Chris Rickleton)

With each year that passes, the Immortal Regiment in the northern Kazakhstan town of Oral gathers new recruits.

Organizers of this May 9 Victory Day parade held to commemorate veterans of the Great Patriotic War against Nazi Germany say they managed to draw 7,000 people this time around. If accurate, that number would be the double of the 2017 edition.

“Every year the regiment expands,” said Mirkhan Stamgaziyev, holding aloft a portrait of his late grandfather, Mustakap Stamgaziyev, who fought on the front in Ukraine. “We come here to remember our grandfathers and great-grandfathers. It is a big event for our town.”

As in the rest of the former Soviet Union, memories of those who fought in World War II are hallowed. But in places like Oral, a fading industrial town lying on the border with Russia, the Immortal Regiment has for some time been the object of a tug-of-war between organizers and authorities seeking to co-opt the event.

The basic idea is simple and was first dreamt up by a group of civic activists in Russia in 2011: large groups of people carrying pictures, typically in black and white, of war veterans on a march through the center of their town or city. The Moscow edition this week brought together an estimated 1 million people.

In Oral this year, which held its fourth edition of the commemoration, marchers stood a block wide and covered the town’s broad Soviet-style streets from side to side.

When the town’s maiden Immortal Regiment was held, however, authorities were wary.

“The first year there were a lot of difficulties. They put pressure on us not to distribute our Guard Ribbons, for instance,” Denis Spiridonov, one of the organizers, told Eurasianet.

The timing and those orange-black Guard Ribbons, or St. George’s Ribbon as they are better known, are at the heart of what initially made the march so contentious.

In May 2015, neighboring Russia was on the crest of a nationalist wave, still basking in the glow of its annexation of the Crimean Peninsula a year earlier. War had broken out between government forces and Russian-backed separatists in the east of Ukraine. Separatist fighters, who fought in the name of a perceived fraternal communion with Russia, adopted the orange-black ribbon as a shorthand symbol of what they cast as a battle against resurgent fascism, which is how Kremlin news media characterized the post-Maidan government in Kiev.

By the time the Immortal Regiment concept reached Central Asia, Russian leader Vladimir Putin had managed to sow anxiety in Moscow’s surest ally by referring to Kazakhstan as part of a “Russian World.”

Countries like Georgia and Uzbekistan immediately imposed a de facto ban on the march. Several countries have devised alternative colors to those on the St. George’s Ribbon.

But authorities in Kazakhstan, including those in Oral, have gradually been won over.

“This year has been better," said Spiridonov, whose family has lived in Oral – which is popularly known by its former Russian name of Uralsk – for three generations. "Local authorities have been very cooperative and helpful.”

If anything, officials have been a little too enthusiastic for the comfort of march organizers.

Last year, there was a soupçon of tension as local authorities sought to ride on the coattails of the 3,000-strong column. At one stage, a cluster of officials attempted to merge with the flowing crowd, which promptly halted and waved on the civil servants as an awkward no-man’s-land formed between the two groups.

Samat Gizatov, another Immortal Regiment co-organizer, accused the municipal administration of engaging in a foolish display of public relations on that day.

“Our march is non-political, non-commercial, a memory for the people. When the authorities do silly things like that, they themselves politicize it,” Gizatov told Eurasianet.

In keeping with its controlling authoritarian style of governance, Astana is neuralgic about crowd control, however, so the chances it would refrain from interfering in an event like this were always remote.

No sooner had this year’s Immortal Regiment begun moving down Oral’s main thoroughfare, a dozen troops from Kazakhstan’s border service carrying a giant Kazakh flag suddenly appeared. Troops stood in formation just in front of the marchers. Between the two clusters, a group of children was led by an assertive blonde called Inessa. Her contribution, as she explained to Eurasianet, was part of her work with the Assembly of the Peoples of Kazakhstan, a semi-official body tasked with upholding inter-ethnic amity.

The incursion was greeted with muted groans from the Immortal Regiment’s front rows. This wasn’t part of the plan.

Adding fuel to accusation that this tradition is a front for covert neo-Soviet jingoism, marchers in many Russian cities have made Soviet dictator Josef Stalin a feature of their commemorative adulation. Another criticism is that the event is sometimes powered by ahistorical patriotism. Although the ideal is for participants to hold up pictures of their own relatives who were somehow involved in the war effort, there are many accounts of people being cajoled into attending and having portraits of complete strangers thrust into their hands.

None of this appeared to be the case in Oral, where Stalin was nowhere to be seen and all the marchers interview by Eurasianet had something to say about their late relatives.

“Both my parents participated in the war and both survived it,” said a henna-dyed elderly woman called Ludmila, who held a framed photograph of her father and mother pressed to her forehead as she walked. Even in her old age, one could see that Ludmila was a copy of her mother. “She worked as a nurse at the front. My father fought in the Pskov oblast,” she said.

At the time of the Soviet collapse, Oral was at least two-thirds Slavic. The wave of emigration that began then has yet to tail off completely.

Now Kazakhs make up well over half of the population in the city. Families like that of Stamgaziyev, who was at the march with his wife and three daughters, the oldest of whom sported a green beret and carried a spray of tulips, speak Kazakh as their first language. They moved to the town from villages in the surrounding region in the early 2000s.

At the Immortal Regiment march, the demographic ratio appeared to be, for a brief time, reversed once more. Many of the cars that lined the streets on May 9 had Russian number plates.

There is a bitter and inescapable irony in the fact that as contentious annual affairs like the Immortal Regiment grow in stature, the surviving subjects of that memorialization are thinning out. The 100 or so surviving war veterans in the Western Kazakhstan Province, of which Oral is the capital, were given special treatment for the day. They were provided free taxi rides to get around town. Authorities set aside a place of pride for them at the spot where the march reached its conclusion.

“We used to speak with at least one every year for the newspaper,” one reporter on the sidelines of the march told Eurasianet. “But now they are so old it is uncomfortable for them. These days, the story is more often about the Immortal Regiment.”