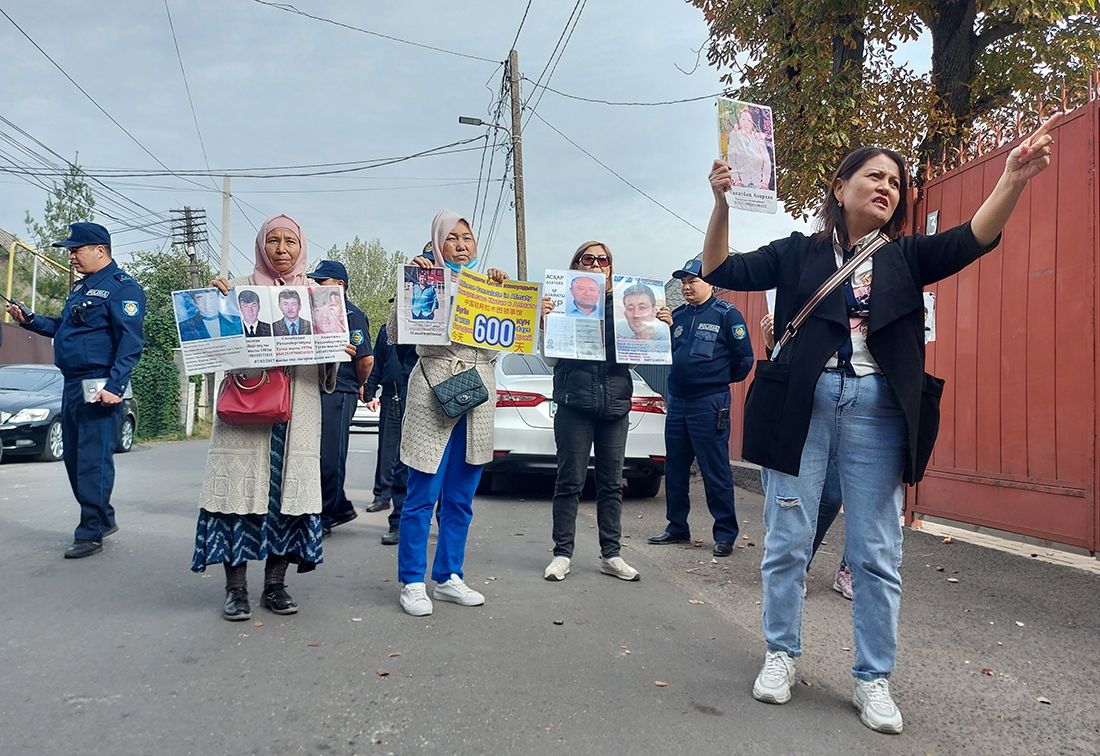 For well over a year, relatives of Kazakhs being held prisoner in China’s Xinjiang province have been protesting most days outside the Chinese consulate in Almaty over the fate of their loved ones.

On September 29, they went to the suburban diplomatic compound to mark their 600th day of protest.

Five women and one man held up pictures of mothers, fathers, brothers and sisters who are languishing behind bars in Xinjiang. They were outnumbered by Kazakh police who were reinforced by extras in a van that arrived shortly before the protest was due to start.

Some of the detainees are in so-called “re-education camps” in which the Chinese government has locked up members of ethnic minorities, including Kazakhs. Others are serving long prison terms.

“That’s my mother,” Gulpiya Kazybek told Eurasianet, holding up a photo of a wrinkled old lady in a white cardigan and flowery headscarf. “She’s in China, in prison. She’s 78.”

The elderly woman had received a 12-year prison term for reading the namaz, or Muslim prayers, Kazybek said. She is among many members of Muslim minorities in Xinjiang serving lengthy sentences on what human rights campaigners deem spurious charges.

For years the Chinese government has faced a barrage of criticism over its incarceration of a million or more Muslims in “re-education camps,” which it insisted were “vocational training centers.”

Nowadays it has formalized the incarceration process by imposing long prison sentences on many of those released from the camps and on other residents in the region, as researcher Gene Bunin has documented.

Ethnic Kazakhs from Xinjiang who have moved to Kazakhstan under a program encouraging Kazakhs around the world to emigrate have for years been raising awareness over abuses in Xinjiang.

Astana says it works behind the scenes on individual cases, but it has been reluctant to speak out forcefully over the issue since it is unwilling to antagonize its mighty neighbor and ally.

It has also moved to thwart the campaigning in Kazakhstan with legal cases against the most vocal activists and efforts to divide and rule different groups.

Police allowed the relatives to proceed with their action some 100 meters from the consulate, although protesters were not permitted to approach the entrance.

An official from Almaty city hall warned them they were breaking the law on public assembly by not notifying authorities of their plans.

On occasion protesters at the consulate have been arrested and fined or jailed, but this time a Eurasianet correspondent witnessed no arrests.

“Help us. Don’t sit by and watch. We need action!” cried one woman as the protest continued.

But with Astana drawing even closer to Beijing owing to Russia’s invasion of Ukraine, the government is unlikely to take robust action over the issue now.