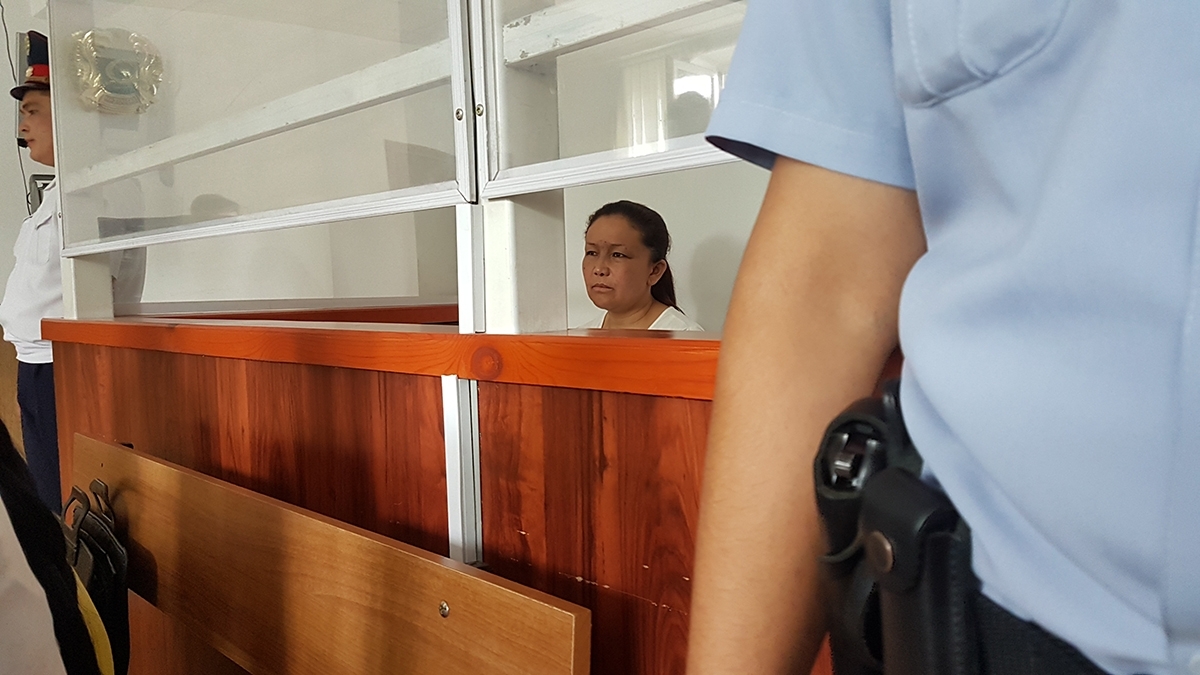 Sayragul Sauytbay, an ethnic Kazakh and Chinese citizen, sits enclosed in the glass cage reserved for defendants at her trial in Zharkent in 2018. (Photo: Almaz Kumenov)

An ethnic Kazakh woman wanted by authorities in China for disclosing information about prison camps in the western Xinjiang autonomous region has been allowed to leave Kazakhstan and resettle in Sweden.

Aiman Umarova, the lawyer for Sayragul Sauytbay, who accompanied her to the airport in Almaty, Kazakhstan’s former capital, on June 3, wrote effusively about the development.

“Goodbye Sayragul! May your life go smoothly,” Umarova wrote on Facebook. “Remember that you are a real Kazakh woman, even though you may have not been treated decently by certain officials.”

Sauytbay’s departure from Kazakhstan will be greeted with relief by authorities in Nur-Sultan, who never quite felt comfortable dealing with her case.

Sauytbay last April fled to Kazakhstan from China. She was detained by security services after she was found to have crossed the border on a fake passport. Once on Kazakh soil, she revealed that she had been subjected to persecution in China, where many hundreds of thousands of people from mainly Islamic ethnic groups have been rounded up and confined in re-education camps. Beijing accuses Sauytbay of spying.

Sauytbay was in August handed a suspended sentence by a court in the eastern town of Zharkent, meaning that she was allowed to walk free. The judge also ruled that Sauytbay would not be liable for deportation, as normally required by law in such cases.

At the same time, Kazakhstan has rebuffed her legal pleas to be granted asylum. With her move to Sweden, she will be able to apply for asylum there.

Nur-Sultan’s reluctance to approve asylum status for Sauytbay springs from its desire to avoid infuriating Beijing. At the same time, the Kazakh government has had to contend with the potential of generating domestic anger by leaving Sauytbay at the possible mercy of Chinese authorities. The desire to avoid flashpoints for public discontent are being felt especially acutely in the run-up to the June 9 presidential election.